It may have been Barack Obama’s first trip to sleepy Laos — and indeed, the first by any sitting U.S. President — but American foreign policy still haunts this landlocked Southeast Asian nation.

At this week’s Association of Southeast Asian Nations (ASEAN) summit, Obama attempted to exorcise some of these ghosts. “Given our history here, I believe that the United States has a moral obligation to help Laos heal,” Obama told an audience in the Laotian capital Vientiane, committing an additional $90 million over the three years toward removing unexploded ordnance.

But as Obama tried to heal old wounds, new ones opened — illustrating both the lingering and fresh challenges of his faltering “rebalancing” to Asia. On Tuesday, new Philippines President Rodrigo Duterte expressed “regret” that he called Obama a “son of a whore,” after the U.S. Commander in Chief stated his intention to raise the 2,000 extrajudicial killings of Duterte’s “drug war” during talks. Although Obama downplayed the spat, his team canceled the scheduled meeting.

It was high drama unfamiliar to Vientiane, a low-rise city of French-built boulevards studded with Buddhist temples, where Soviet hammer and sickle flags flutter outside iPhone repair shops. ASEAN’s most isolated state is also one of its most authoritarian, though Laos was thrown into the international spotlight when it was made bloc chair for 2016. This also made it the venue for Obama’s last attempt to woo a region increasingly beholden to rival superpower China before he departs the Oval Office.

Faced with a mounting budget deficit, and with the fracking revolution making disentanglement from a roiling Middle East a real possibility, the White House announced a political, military and economic “rebalancing” to Asia in 2012. But four years later, the reality is simmering conflict in the South China Sea, entrenched authoritarianism across Southeast Asia and stillborn efforts to boost business ties. Moreover, critics say that Washington’s preoccupation with countering Beijing’s influence has undermined support for core American values, such as democracy, electoral rigor and human rights.

“The rebalancing is a complete failure on multiple levels,” says Bridget Welsh, a Southeast Asia expert at National Taiwan University. “Obama has left a worsening authoritarian legacy. But they couldn’t care less because it’s all about China.”

Certainly, Southeast Asia has regressed politically over the course of the “rebalance,” with the notable exception of Burma (officially called Myanmar), which has moved toward qualified democracy. A military junta has run Thailand since a May 2014 coup d’état. Malaysia’s opposition leader is once again behind bars, while Prime Minister Najib Razak stands accused of embezzling $700 million of state funds. (He denies any wrongdoing). Singapore, Vietnam, Cambodia, Brunei and Laos remain autocratic, with the 2012 disappearance of award-winning Lao activist Sombath Somphone still unexplained in the latter.

Read More: The New Head of the U.S. Pacific Command Talks to TIME About the Pivot to Asia and His Asian Roots

Yet the White House has pushed increased engagement with all these states. In May, Obama lifted a 50-year-old arms embargo with Vietnam. He did this even though key civil-society leaders were detained on their way meet him in Hanoi. Obama raised the issue, though still inked the deal. “This was a necessary step politically as the conservatives in Vietnam basically made it nonnegotiable,” says Carlyle Thayer, emeritus professor at Australia’s University of New South Wales.

Of course, that deal was never really about Vietnam. Washington needed enhanced relations with Hanoi to counter China’s expansive territorial claims and militarization of rocks and reefs in the South China Sea. And for Obama, that fact looms larger than detained activists. “We should not mistake our foreign policy as an instrument to bring about improvements in human rights,” says Stapleton Roy, a former U.S. ambassador to China and Indonesia. “We can only play a marginal role from outside.”

The military component of Obama’s “rebalance” always came first. Owing to drawdowns in Iraq and Afghanistan, the White House has managed to reduce overall military spending while still remaining committed in the Asia-Pacific. The goal to have 60% of U.S. naval forces in that theater has almost been reached. Enhanced troop and ship rotations have been agreed with Philippine naval bases, while Singapore and East Malaysia are also hosting U.S. vessels. Even the navy of Cambodia, a staunch ally of Beijing, was recently entertained on a U.S. aircraft carrier.

But to soften the military aspect of the “rebalance” there needed to be an economic component. This is the Trans-Pacific Partnership (TPP) free-trade pact, which has been signed by a dozen nations, including four in ASEAN so far. Yet the deal has stalled in Congress, and both candidates for November’s presidential elections — Hillary Clinton and Donald Trump — are TPP skeptics. “TPP is a major setback as that was the attempt to offset the military side of the rebalance,” says Thayer.

Without TPP, U.S. investment in Asia will struggle to compete. Anthony Nelson, a director at the U.S.-ASEAN Business Council, says American companies have $226 billion invested in ASEAN, which is more than they have in China, India and Japan combined. However, China had $400 billion invested in ASEAN in 2015. “There’s no question that the Chinese are closer … and incredibly important partner of every ASEAN country,” says Nelson.

Beijing has the wherewithal to build dams in Laos, oil pipelines in Burma and rail routes through Indonesia. And, because of its geographical proximity, China directly benefits from the enhanced connectivity. Unable to compete in grand infrastructure projects, the U.S. must foster a trade environment where American companies can source materials and manufacture across much of Asia with minimal tariff restrictions.

Other than his opposition to TPP, a Trump presidency will be a leap into the unknown for regional engagement, with the Republican candidate vowing to cut “a good deal” with North Korea as well as to force allies to pay for U.S. defense assistance. Clinton, by contrast, made significant inroads during multiple trips to the region as Obama’s Secretary of State. “When [Clinton] was Secretary of State, soft power issues were more on the agenda, and she actually promoted things like women’s rights,” says Welsh.

But even Clinton will find herself constrained by America’s problematic legacy in Asia. Other than the Laos campaign, there were carpet bombing in Cambodia, the use of Agent Orange in Vietnam, and CIA support for Indonesia’s coup under Suharto in the 1960s. In May, Obama became the first sitting U.S. President to visit Hiroshima, where the U.S. dropped an atomic bomb in 1945. Japanese opposition to U.S. military bases is building. When Duterte lashed out at Obama, he spat: “We have long ceased to be a colony.”

Of course, Beijing also has baggage with its neighbors, and anti-Chinese resentment is building, especially over the East and South China Seas. This week, Duterte raised alarm at Chinese barges with cranes being spotted in the disputed Scarborough Shoal, suspecting that Beijing may attempt to militarize the reefs as it has already done in the similarly disputed Spratly Islands. Despite previously advocating reconciliation with China, and agreeing to top-level talks in Manila and Beijing, Duterte said any confrontation over the islands would be “bloody.”

As such, repairing relations between the U.S. and Philippines after this latest spat will take on new significance — even if that requires ignoring the bullet-riddled corpses piling up on Philippine streets. For Roy, this is justified for the greater good of preventing a region being dominated by Beijing. “Our presence encourages responsible rather than coercive behavior by China,” he says. “That’s essentially what the ‘rebalancing’ strategy is all about.”

Welsh sees things differently: “We should be working to distinguish why the U.S. is different from China, which has to do with the idea of human rights and democracy.” 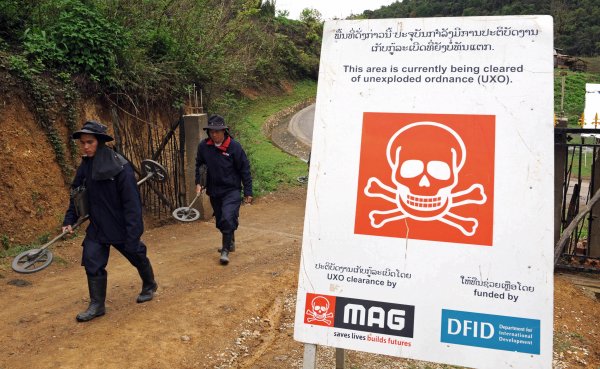 U.S. Pledges $90 Million to Clear UXOs in Laos
Next Up: Editor's Pick