Donald Trump attacked Hillary Clinton on Tuesday for her aide’s decision to destroy her old mobile phones and for her decision to discard emails that her lawyers had deemed personal in nature, using newly released FBI documents to suggest illegal motives that federal investigators did not find.

“Nobody takes all the risks Hillary Clinton took unless they’re trying to cover up massive, massive crimes,” he said. The crowd, which had periodically erupted into chants of “USA! USA!” throughout the speech, started to chant “Lock her up! Lock her up!” Many wore T-shirts emblazoned with the phrase “Hillary for Prison.”

The FBI documents described one aide’s testimony about destroying two personal electronic devices after Clinton stopped using them. The FBI did not suggest that either device was destroyed with an intent to destroy evidence from an investigation. The documents also described Clinton telling investigators that her separate decision to discard email records her lawyers had deemed to be personal was not intended to “avoid complying with the Federal Records Act, FOIA, or state or FBI requests for information.”

Trump and Clinton are nearly tied in a CNN poll released Tuesday, with Trump winning 45% of the vote and Clinton winning 43%. Libertarian Gary Johnson is getting 7% of the vote, and Green Party candidate Jill Stein is pulling in 2%. Clinton still leads the race in national polling averages.

Trump started his speech by comparing Clinton to the Chancellor of Germany, whose pro-refugee policy recently led her party to suffer a massive defeat in state elections. “She is running to be America’s Angela Merkel,” Trump said. “And you see what happened to Angela Merkel.” He reiterated his vow to curb immigration, calling the wave of Syrian refugees waiting to get into the U.S. “the great Trojan horse of all time.”

Trump returned to his argument about the need for radical change, which he has repeatedly pushed throughout the campaign. “We will never solve our problems by relying on the politicians who created our problems,” he said. “So to every American who has been waiting for real change, your wait is over, your moment of liberation is at hand.”

He also reiterated his promise to build a wall on the southern border. When supporters began to chant “Build that wall,” he asked “Who’s gonna pay for that wall?” and supporters shouted “Mexico!” After Trump recently returned from a surprise visit to Mexico to meet with President Enrique Peña Nieto, the Mexican President tweeted that he had told Trump his country would not pay for the wall.

After a speech at the Great Faith Ministries church in Detroit over the weekend, Trump continued his outreach to African-American voters, suggesting that things were so bad in their communities that they couldn’t possibly get worse if he were President. “To those African Americans and Hispanics suffering in crime and poverty, I say very simply: Give Donald Trump a chance,” he said. “What do you have to lose?”

He also continued his promise to fight against international trade agreements like the Trans-Pacific Partnership, which many workers say would threaten American jobs. “It’s going to be now America first, remember that, and our workers come first,” he said, adding that he would create consequences for companies that take American jobs overseas. Clinton has repeatedly criticized Trump for manufacturing some of his signature products like Trump ties and Trump furniture in overseas factories in China and Turkey.

Supporters came from all over the state to hear Trump speak Tuesday, after a Mike Pence event scheduled for Fayetteville over the weekend was indefinitely postponed. “He’s honest, he’s not politically correct,” said Walker Shelton, a 23-year-old firefighter who attended the event with his twin sister Catherine and mom Sue. “He’s not feeding me the same bull crap.”

Shelton said seeing Trump “gets you pumped up about the country and where it could go.”

Most Popular on TIME
1
Why Is America So Divided Today?
2
All the Marvel Clues You Missed in WandaVision's First Two Episodes
3
Kamala Harris to Resign Senate Seat Monday 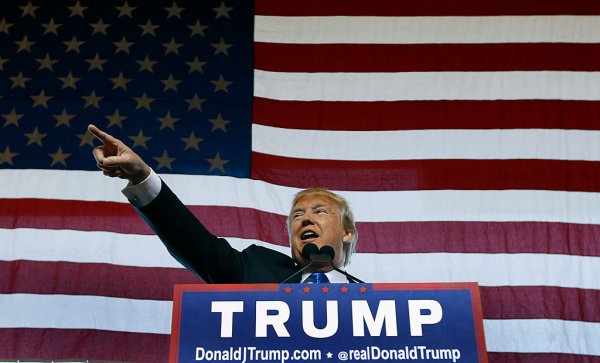 Donald Trump Wants Military to Hatch Plan to Stop ISIS in 30 Days
Next Up: Editor's Pick