Hillary Clinton Returns to the Campaign Trail After Quiet Weeks

In the heat of late August, Hillary Clinton all but disappeared from the public eye, retreating to the country’s wealthiest enclaves from Nantucket to Beverly Hills to host private, high-dollar fundraisers.

Now, she’s back. Armed with a brand new 737 emblazoned in light blue with the words “Stronger Together,” Clinton is roaring onto the campaign trail, preparing for the final nine-week grind before election day.

Her calendar is once again full of public events from Florida to Ohio, and her allies—including two presidents and two erstwhile primary opponents—are fanning out across the country for her. Clinton spoke at length twice in two days with reporters on her plane and glad-handed with voters in Tampa and Cleveland. She began preparing for a televised forum on national security and looked ahead toward the presidential debates.

After Clinton spent much of the weeks leading up to Labor Day weekend with celebrities and billionaires, September comes as a kind of re-reintroduction to voters and her neglected press corps.

“This is the countdown to one of the most important elections in our lifetimes,” Clinton said on Tuesday to a crowd in Tampa, Florida. “We have 62 days to make the case.”

Clinton is returning to a brutal contest with a skeptical audience at a critical time. She has lost much of the post-convention boon that buoyed Democrats in early August, and polls have tightened between Donald Trump and her. New revelations about the Clinton Foundation’s dealings during her time at the State Department, while showing no evidence corrupt actions, have dogged her.

She was criticized for maintaining a distance from the press, and meanwhile, Trump appeared better able to hold on to his unpredictable tongue. Despite the millions that Clinton has spent on advertising and Trump’s wide unpopularity, her lead over Trump diminished from 7 points in early August to just 3 points today, according to a national polling average.

Clinton’s dip in the polls coincides with her absence from the campaign trail. She held just two public events in the two weeks before Labor Day weekend, a close look at her campaign’s schedule shows, while hosting 20 fundraisers in the same period. She bounced from East Hampton to Silicon Valley, rubbing elbows with Cher, Paul McCartney Jimmy Buffet and Apple CEO Tim Cook.

She took photo booth snapshots with Justin Timberlake and Jessica Biel, and she stayed overnight at the home of Haim Saban, who has given $10 million to Clinton’s super PAC. In August Clinton’s campaign raised a total of $143 million to pay for advertisements and her sprawling staff of organizers across the battleground states. She rarely spoke with reporters.

But now Clinton signaled this week that her cloistered campaign will change. Saying she would be more accessible, Clinton saddled up with reporters two days in a row on her plane, speaking informally and making light about Trump’s attacks.

“I believe I have created so many jobs in the conspiracy theory machine factory,” she kidded on Tuesday. She commented to the press photographers that shaking hands at the rope line after events has changed over the years. These days “it’s all about the selfie,” she said. “I had a lot more conversations without selfies” in 2008, Clinton added. The day before, in the midst of a coughing fit aboard her new plane, she told reporters that “every time I think about Trump I get allergic.”

Trump has assailed her for having a light schedule, suggesting she needs time to go back home and “sleep.” His allies and family have also suggested that Clinton has not reached out sufficiently to voters, with Donald Trump Jr. calling his father the “candidate of the people.” Trump has ramped up his campaign schedule in recent weeks after a slower early summer.

Clinton was in Cleveland and Hampton, Illinois, on Monday and Tampa on Tuesday, where she told an audience, in what seemed almost a pre-debate hype talk directed at Trump, “that I’m a very patient person. I don’t quit, I don’t give up, I don’t blink.” On Wednesday she has a public televised forum and on Thursday she is scheduled at a campaign rally in Charlotte, North Carolina.

Clinton’s allies will be putting in miles as well. President Obama will campaign for Clinton next week, and Vermont Sen. Bernie Sanders held an event in New Hampshire for her on Labor Day. First Lady Michelle Obama will talk to students in Northern Virginia and former president Bill Clinton will be in North Carolina and beyond.

Time is running shorter for both candidates. Early voting begins in Virginia at the end of September and in Ohio in October. Voter registration deadlines are approaching in many states, which Clinton has reminded her audiences of in detail. “If any of you are not registered, or not sure you are registered, or you’re a student registered somewhere else but it would be more convenient to vote here, you have until October 11,” Clinton said in Tampa, along with a detailed explanation of how to sign up.

Clinton’s intense post-Labor Day schedule will not relent in the coming weeks, according to aides. She is well aware of the shift. Asked about her weekend, when she was at home in Westchester, Clinton said it was “the last moment before the mad dash.” 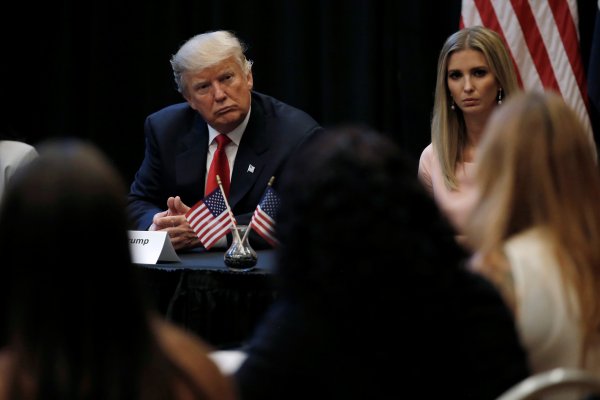 Presidential Candidates Roll Out the Heavy Artillery
Next Up: Editor's Pick