Hillary Clinton and Donald Trump took the same stage for the first time on Wednesday to address crucial questions about national security and combatting terrorism in a “Commander-in-Chief Forum” on NBC. Voters tuned in to evaluate which candidate has the temperament, experience and vision to be America’s next Commander-in-Chief.

But they weren’t the only ones who were watching. In recent months, ISIS has made clear that it’s closely following this election, too—and it has chosen a candidate. Interviews with ISIS members and analysis of social media, including in a recent Foreign Affairs article by Mara Revkin and Ahmad Mhidi, make it clear: “ISIS is rooting for Trump.”

This year, ISIS isn’t simply a passive observer of American politics. Since the group’s rapid rise in 2014, ISIS has established a far-reaching, sophisticated propaganda machine. Its members rely on social media to shape public opinion, recruit new members and mobilize followers to carry out attacks. Now, some of them are using those channels to advocate for Trump. In August, one ISIS spokesman wrote: “I ask Allah to deliver America to Trump.” Another supporter declared: “The ‘facilitation’ of Trump’s arrival in the White House must be a priority for jihadists at any cost!!!” ISIS is working to drum up support for the candidate it has called “the perfect enemy.”

That may come as a surprise to some. After all, Trump has spent this election season making a series of combative and bellicose comments on terrorism—from his pledge to kill the families of terrorists, his plans bring back torture of suspected terrorists and his call to ban all Muslims from entering the United States. But the truth is, Trump’s statements and extreme policies aren’t just contrary to our values—they play right into the hands of ISIS.

Trump’s anti-Muslim proposals are likely to inspire and radicalize more violent jihadists in the U.S. and Europe. Specifically, his calls for a ban on Muslims visiting our country and for blanket spying on mosques reinforce ISIS’s view that the U.S. is hostile to all Muslims. As a former ISIS fighter told Revkin and Mhidi: “When Trump says hateful things about Muslims, it proves that jihadists are right to fight against the West, because the West is against Islam.” As a result, his ideas fuel the group’s efforts to radicalize and mobilize its followers to take action. In fact, Trump himself has been featured in ISIS propaganda videos following the Brussels attack and the Orlando massacre.

Trump’s statements also serve to isolate and alienate the same Muslim Americans who must be our partners in this fight. They’re often on the front lines against ISIS in its effort to radicalize those who are disaffected or otherwise susceptible to its hateful message. And they are in the best position to recognize the signs of radicalization and to intervene before it’s too late. Marginalizing these Americans sows distrust of the government and law enforcement, and makes it more difficult to identify and disrupt attacks. Terrorist groups around the world are eager to capitalize on this opportunity: the al-Qaeda group in East Africa released a video quoting Trump to convince American Muslims to join the group because they are not welcome in their own country.

Further, Trump’s comments undermine our counterterrorism efforts around the world. By demonizing Muslims, he feeds ISIS’s narrative that the U.S. is at war with Islam. As one ISIS defector interviewed by Revkin and Mhidi said: “We were happy when Trump said bad things about Muslims because he makes it very clear that there are two teams in this battle: the Islamic team and the anti-Islamic team.” He also risks alienating our allies in the Middle East and North Africa. These nations are our essential partners in the fight against terrorism, and we depend on the cooperation of their military, intelligence and law enforcement services. Trump does not seem to grasp the importance of working with our allies to combat terrorism. This is not a threat we can defeat alone—and his comments disparaging our allies, and threats to walk away from them, undermine our efforts to build and foster these critical partnerships.

The bottom line is this: Trump’s erratic and belligerent slogans are no substitute for policies based on facts and sound judgment.

That’s why, in my view, Hillary Clinton is the clear choice for national security. In contrast to Trump, Clinton has drawn on her years of experience to set out a pragmatic and detailed strategy to defeat ISIS. She has identified specific steps the United States should take both overseas and at home. Clinton rejects politics of fear and divisiveness and calls on Americans to stand resolutely together and to build alliances abroad in this struggle. Fundamentally, she recognizes that American values of freedom, tolerance and the rule of law are strengths—not vulnerabilities—in the fight against terrorism.

As Americans consider who should be our next Commander-in-Chief, they’ll face perhaps the starkest contrast in generations—between a candidate whose uninformed and reckless statements on ISIS have already helped our adversaries, and a candidate whose approach reflects her deep experience, determined leadership and unbending belief in the power of American values. The results will have a sweeping impact on our security—and the world will be watching. 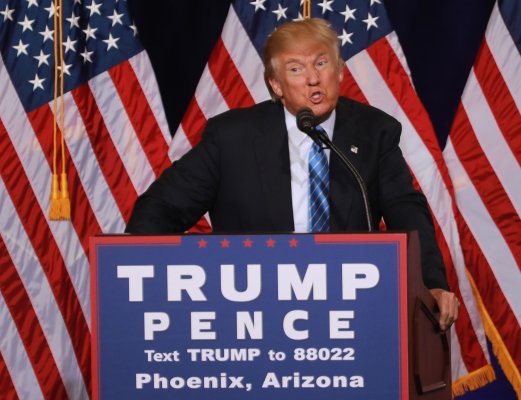 Donald Trump Is Dangerously Wrong on Immigration-Terror Link
Next Up: Editor's Pick