The Surprising Way a Supermarket Changed the World

View of the front of the Piggly Wiggly store, located at 106 South Austin in Chicago, in 1926. From the Chicago Daily News collection.
Chicago History Museum—Getty Images
By Ashley Ross

Picking up a basket while grocery shopping may seem second nature now, but the idea was once groundbreaking. And that was far from the only thing that changed when Piggly Wiggly, the first modern American supermarket, opened 100 years ago.

Clarence Saunders opened the first Piggly Wiggly on Sept. 11, 1916 in Memphis, Tenn.—after a few construction delays, which is why the company celebrates the anniversary on the 6th—and thus pioneered a self-service model that was drastically different from the way things had long been done. At an old-style grocery, customers would pass a grocery list to a clerk, who would then put items together for shoppers in one bag. At Piggly Wiggly, on the other hand, the shoppers did their own choosing—and the products had to do the tempting.

“That [method] meant consumers could make decisions as to what it was they wanted to buy, and that really led to companies trying to catch consumers’ attention. It’s really the origin of branding,” says John Stanton, a professor of food marketing at Saint Joseph’s University.

“For a long time you had specialty retail stores like butchers and bakers and candlestick makers,” says Stanton, “and then you had these bigger stores that said, let’s reduce the cost and make it more affordable.”

The supermarket attracted shoppers and workers as grocery item prices dropped along with overhead costs.

Other supermarkets popped up as well, with King Kullen opening in 1930 in Queens, New York, and Safeway and Kroeger grocers adapting to the new normal. Some contention still surrounds whether Kullen or Saunders founded the first supermarket, but the opening dates suggest Piggly Wiggly was, in fact, the original.

Supermarket success continued to prove fruitful during World War II when thousands of small grocery stores had to close as their employees went off to war. For supermarkets, losing one or two people didn’t put the chains out of business. After the war, the popularity of refrigerators and automobiles for nearly every household kept feeding the model, so much so that free parking became a necessity at every supermarket.

Throughout the ‘50s, the supermarket proved itself an American phenomenon, Stanton says. It was such a marvel that in 1957, during a visit with President Eisenhower, Queen Elizabeth and Prince Philip visited a Maryland grocery store for 15 minutes to see what it was all about.

The Queen was reportedly “bemused by the grocery cart’s little collapsible seat,” saying “it is particularly nice to be able to bring your children here.”

Children in supermarkets drastically changed the game of branding, with designers able to place food at kids’ eye levels, making it easy for them to woo their parents into various purchases.

“The whole idea of in-store merchandising became important with Piggly Wiggly,” Stanton says. That idea has continued all the way from early 20th-century signs to electronic systems that individually identify shopped in the store in order to advertise to them personally.

Of course, as technology changed the game inside the store, it changed the game outside, too, with online grocery shopping escalating in popularity so much that more than a third of online shoppers are expected to buy their groceries online in 2016.

Stanton is not surprised.

“It’s a continuous thing, a continuous movement of where people shop and how they like to shop, he says. “Supermarkets played a huge role in our economy and the development of our society and now there are other things sharing that spotlight.”

But while the history and legacy of supermarkets is clear, one thing is not: How Piggly Wiggly got its peculiar name. The origin remains a mystery, but when Clarence Saunders was once asked why he picked the name, he simply responded: “So people will ask that very question.” 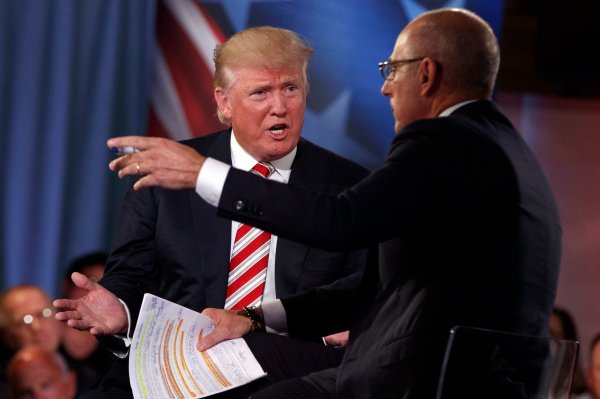 Intelligence Briefings for Presidential Candidates Caused Trouble From the Start
Next Up: Editor's Pick