A Refugee's Night of Terror on the Mediterranean

SICILIAN STRAIT, MEDITERRANEAN SEA - MAY 25: Migrants in an overcrowded boat, which was about to capsize, are rescued by Bettica and Bergamini ships of Italian Navy at Sicilian Strait, between Libya and Italy, in Mediterranean sea on May 25, 2016. The Italian Navy saved around 500 migrants as they found dead bodies of seven migrants in the sea during the operations. (Photo by Italian Navy / Marina Militare/Anadolu Agency/Getty Images)
Anadolu Agency—Getty Images
By Charlotte McDonald-Gibson

Cast Away: True Stories of Survival from Europe’s Refugee Crisis, tells the story of the European Union’s chaotic and mismanaged response to the crisis through the eyes of five people who have arrived on Europe’s shores since 2011. They include Mohammed Kazkji, a young Syrian who fled military service in 2012 and was trying to forge a life in Libya. But then civil war gripped that country too, and his family urged him to try and reach Europe. In this edited extract, we join Mohammed as he prepares to set sail.

Ever since he was a child, the sea had filled Mohammed Kazkji with a sense of foreboding. If you were killed by a bullet, at least it was quick. Drowning seemed like such a slow and awful way to die, and he avoided watching films about the sea or shipwrecks.

One day, I will be swallowed by the sea, he used to think as he looked out at the waves.

He only learned to swim out of embarrassment. When he was ten years old he went to a pool in Damascus with two friends, and could not bear the humiliation of stories spreading around school of Mohammed and his fear of water. So he forced himself to jump in and stayed in the water until his survival instinct took over and his uncontrolled flailing morphed into a haphazard stroke which kept him afloat.

Still, the prospect of hours at sea brought back that dread of his childhood, and it was with reluctance that Mohammed found himself standing on the beach in the Libyan town of Zuwarah on the night of October 10, 2013. The former coastal resort had become a hub for the thriving new business in people smuggling, as the optimism of the Arab Spring faded away and brutal conflicts sent record numbers of people fleeing from their homes.

Mohammed pushed his way down to the water’s edge to examine the vessel that would take him across the Mediterranean, but all he could see were two small motor boats.

“Where is the big boat?” Mohammed asked.

Read More: Between the Devil and the Deep Blue Sea

“Don’t worry,” a smuggler told him, gesturing out into the darkness. The small boats would ferry the 400 passengers out to a larger vessel at sea, he said.

When Mohammed finally arrived at the larger fishing vessel, he found himself clambering aboard a boat which he estimated to be decades old and little better than scrap. It was around 30 m (98 ft.) long and painted the same bright blue as every fishing vessel he had ever seen. A long wooden deck tangled with fishing nets led to a structure near the prow which had once been the captain’s room, and which was soon filled with people. The roof of the structure was commandeered as another level on which to pack even more people, creating the appearance of a floating human pyramid.

Any protestations about overcrowding were met blankly by the captain, and Mohammed elbowed a small gap on the open deck towards the back of the boat. Soon after midnight, the motor spluttered into life and the Tunisian captain started off under cloudless skies.

After about three hours of sailing someone on the boat lit a cigarette, and it barely registered with Mohammed. But when, a little while later, he was suddenly blinded by a search light, he was lucid enough to know that that was not part of the plan. Had the Libyan police caught up with their vessel, and were they sending them back? But when Mohammed peered over the side of the boat and to the source of the light, looking straight at him from a dinghy were the cold eyes of a pirate, a Kalashnikov rifle slung over one shoulder.

Six heavily armed men prowling the sea had spotted the lit cigarette and aimed their vessel towards the rich pickings. The families on board the fishing vessel had taken everything they could with them to try and start a new life in Europe, and the pirates knew that pockets, wallets, bags and bundles would be bulging with cash. For each family their savings may only be enough to survive for a few weeks when they reached Europe, but for the robbers a few hundred from each of the 400 passengers would make a fine bounty.

“These are militiamen,” the Tunisian captain shouted above the drone of the waves and the dinghy motor. “They want money and mean to kill people, so we have to go on.”

Utterly helpless, Mohammed followed his instinct and buried his head in his arms, trying to ignore the edge of fear in the captain’s voice as he urged his cargo to keep still.

Then the gunfire started. Terrified passengers tried to scramble away from the sides of the boat, but there was nowhere else to go and it just caused the boat to rock in the rising waves. A woman hoisted her two-year-old son above her head, pleading with the attackers to stop shooting. “Please,” she screamed, “I have a baby.”

The mother’s appeals went unheard, and Mohammed winced at the phhut of a bullet striking wood. His head down in prayer, Mohammed heard a bullet strike the engine, and he was sure of his fate now: he was going to die in the cold sea far away from the family he loved so dearly. With each burst of gunfire, he braced himself for the bullet which would end his life.

Then the moon disappeared and as the rising sun slowly brought an end to their hellish night, Mohammed raised his head from his hands. The dinghy had gone, the militia retreated back to the Libyan coast. No one on board was dead. The woman who had tried to protect her child sat now in a huddle, enveloping him with her body.

For a brief time, Mohammed was happy—he had survived yet another ordeal. Then he looked over the side of the boat. The trawler was sitting lower in the water, and a fierce swell sunk their boat further with each buffeting wave.

It didn’t take long for others on board to notice their fresh predicament, and now in the morning light Mohammed could see panic on people’s faces. When it became clear that the pirates’ bullets had caused irreparable damage, the captain asked for anyone who could speak English to make a call for help on the satellite phone.

At 11 a.m., Mohanad Jammo, a doctor from Aleppo, called the Rome Rescue Coordination Centre and gave them their position, reporting that there were 400 people on board including 100 children, and they were sinking fast. The line was cut off. They got through again just after midday, only to be told by an officer in Rome that their coordinates placed them in the Maltese search-and-rescue area so they should call them instead. Eventually the Italians also contacted the Maltese, and a rescue operation was launched at around 1 p.m.

But no boats came. The sun sunk lower in the sky, and panic was spreading. Some men had gone below deck with empty water bottles and were attempting to bail out the water. Many people tried to save themselves with a misguided surge toward the side of the boat which was higher in the water, causing the vessel to list more sharply. Older passengers with more experience of the sea shouted that everybody must stay still.

A voice in the crowd urged people to cast their belongings overboard to lighten the load. Mohammed opened his bag and looked at the contents, symbolizing his life up until that moment: the engineering manuals that represented his studies, a few mementos of his family.

He didn’t dwell on the symbolism for too long before throwing it over the side, hopeful that his act was one of many which would keep them afloat for that little bit longer while the European navies raced towards them.

They were still waiting for the rescue boats at 5 p.m., when the trawler gave one last lurch in the swell and disappeared beneath the waves.

Cast Away will be published in the US by The New Press on Sept. 6 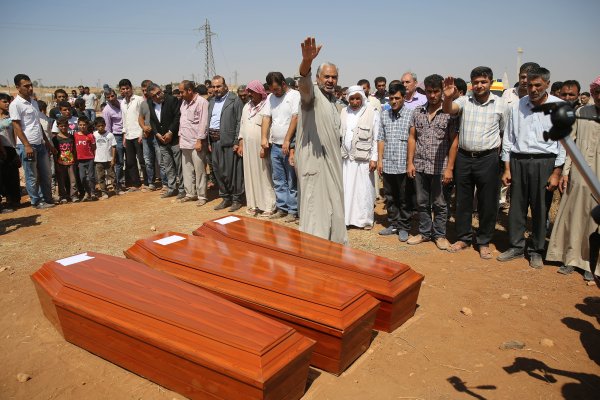 Alan Kurdi's Death Has Changed Little for the World's Refugees
Next Up: Editor's Pick