Mel Gibson may not always be a good director, but he’s never a stupid one. His Hacksaw Ridge, which premiered here in Venice on Sunday, is blunt and effective, a picture cannily crafted for maximum effect: Whatever subtlety it gets comes from its anchor performance by Andrew Garfield, who plays Desmond T. Doss, a real-life World War II soldier who—as a conscientious objector—refused to carry a weapon but whose bravery saved the lives of at least 50 men in his battalion during the Battle of Okinawa.

Maybe that’s exactly why Gibson cast Garfield in the first place: He’s skinny as heck, with a giraffe neck and quizzical eyebrows, an Anthony Perkins for today. He’s a cornfed guy who, for a brief, decisive flash of time, will end up carrying the world on his bony shoulders. Doss was a country kid from the Blue Ridge Mountains, and Gibson sets up his backstory in a deeply conventional and slightly schmaltzy extended preamble: We see Doss meeting and courting his future bride, a pretty, sensible nurse named Dorothy (Teresa Palmer), and cringing from the abusive behavior of his alcoholic father, Tom (Hugo Weaving). But the picture really sparks when Doss shows up for basic training and makes his spiritual and religious beliefs known: He’s a Seventh Day Adventist, and is adamantly against killing another human being, a point of view that doesn’t go down well with the U.S. Army. Doss makes it clear he’s eager to serve his country and wants to be a medic, but his sergeant (Vince Vaughn, in a prickly, quietly intense performance) comes down on him, hard, and his fellow soldiers, particularly Luke Bracey’s Smitty, turn on him mercilessly. Doss is nearly court-martialed for defending his convictions, but an 11th-hour near-miracle saves him—and if there’s anything we know about Gibson, it’s that he loves a good miracle.

There are quite a few of them in Hacksaw Ridge, but they’re the manmade kind, examples of human beings acting with extraordinary courage and conviction. This picture isn’t for the faint of heart. When Doss and his fellow soldiers finally make it to Okinawa, they’re see right away what’s in store for them, and Gibson doesn’t soften the horrors: He shows us men whose bodies have been torn in two, their entrails dangling like useless fringe, and rats nibbling at the faces of men who have been dead only a few hours. Gibson’s relentlessness may seem exploitive: The blood-soaked realism of Hacksaw Ridge is even more vivid and grisly than that of Saving Private Ryan, and there were plenty of times I wanted to turn away. But I don’t think you could tell this story properly or honestly without being forthright about the horrors of the Pacific Theater, and as Gibson dramatizes them, they put Doss’ actions in jaggedly sharp perspective. Garfield’s Doss, at first a scrawny, guileless farmboy, becomes as relentless as a terrier: Even after his battalion retreats, he keeps pushing forward to drag as many wounded men as possible to safety, lowering them down one by one from a 100-foot ridge on a rope knotted into a series of dubious-looking loops. The prayer he keeps repeating —“Please, Lord, help me get one more”—doesn’t even sound aggressively religious. It’s more an incantation, the automatic mantra of a man living desperately in the moment. (The movie’s closing credits are preceded by footage from an interview with Doss himself—conducted before his death, in 2006—in which he states plainly that this is the prayer that kept him going.)

This wouldn’t be a Mel Gibson movie without some religious imagery, and so we get a shot of a stretcher, bearing a wounded man, that appears to rise to the sky, like Christ himself ascending to the heavens. You can accept this moment whole-heartedly or skim over it—it neither mars nor intensifies the story. Every once in a while Gibson makes a groaner of a choice in the way he uses Rupert Gregson-Williams’ maudlin, string-heavy score: The movie’s no-music moments are far more effective, piercingly so.

But then, no one expects understatement from Mel Gibson. And if Hacksaw Ridge occasionally, or even often, veers into overkill territory, at least it’s a picture alive with grim vitality. This is Gibson’s first movie since the 2006 Apocalypto, and his first since rational people everywhere turned against him for his repeated anti-semitic ravings. Hacksaw Ridge doesn’t absolve him of those. But it’s still a movie that reaches out toward the idea of goodness in the world. And whether you or I like Gibson as a person or not, it’s no one’s place to deny his reach. 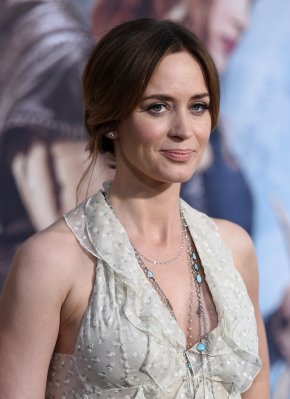 How Emily Blunt’s Mary Poppins Will Differ From Julie Andrews’ Version
Next Up: Editor's Pick