A Salute to the Home Team: America’s Civilian Workforce

The US Flag blows in the wind as sailors and marines stand on the deck of the USS Bataan as it arrives into Pier 88 during the 'Parade of Ships' in New York, on May 25, 2016.
Timothy C. Clary—AFP/Getty Images
Ideas
By Secretary Ray Mabus

As Secretary of the Navy, I have the privilege to lead America’s Away Team, our Sailors and Marines. Our Navy and Marine Corps uniquely provide presence, around the globe, around the clock. That unrivaled advantage – on, above, beneath, and from the seas – gives our leaders options in times of crises, reassures our allies and deters our adversaries.

Presence would not be possible without America’s Home Team, our civilian workforce. The Navy and Marine Corps benefit from the work of hundreds of thousands of civilians, contractors and workers in our public shipyards. America has a keen maritime interest: 400,000 jobs are directly or indirectly supported by the maritime industry, and 41 million jobs are linked to international seaborne trade. From Marinette, Wisconsin, to Pascagoula, Mississippi, from Bath, Maine to San Diego, California, American workers build, maintain, and repair the platforms essential to our missions.

Our Constitution tells a story of a nation destined for a great navy: our founders instructed that Congress can raise an army, but must provide for and maintain a navy. Our nation’s oldest shipyard, Norfolk Naval Shipyard, was intent on fulfilling that destiny: the shipyard existed more than 30 years prior to the creation of the Navy Department. Since then, workers in shipyards and aircraft assembly plants across the nation, and the civilians of the Department of the Navy, have done their work with devotion, pride, and distinction despite sequestration, furloughs, and pay freezes. They have ensured the Navy and Marine Corps have the tools to win wars and protect sea lanes for safe trade and commerce. They have enabled the United States Navy to be a reliable, present, international partner, providing humanitarian assistance and disaster relief to nations and people in need.

There is high demand to sustain these missions, and we need to make sure that we give our Sailors and Marines what they need to stay ahead of potential rivals. That is why I committed to reversing the decline in shipbuilding that began in 2001. In the seven years before I took office, the Navy contracted for only 41 ships, not enough to stop our fleet from shrinking and not enough to maintain the industrial base and the critical skills that we cultivate there – formidable threats in themselves. In my seven years as Secretary, we’ve contracted for 85 ships, and we’ve done so while increasing aircraft purchases by 35 percent – all with a smaller top line. Back on course, America’s Navy will reach 300 ships by 2019 and our assessed need of 308 ships by 2021, and the associated industrial base will remain strong and vibrant. Our growing fleet will enable us to continue to remain not just in the right place at the right time, but in the right place all the time.

That is the presence our Navy and Marine Corps and civilians have provided throughout history and will continue to provide. We have protected and promoted safe shipping from the Gulf of Guinea to the Gulf of Oman and from the Western Pacific to the Bay of Bengal. In the last 110 years, we have sailed both the Great White Fleet and the Great Green Fleet. We are the first responders in times of crises and provide the President options where no other military force can operate. It is why the Navy and Marine Corps will continue to be the greatest expeditionary fighting force the world has ever known.

Today, we pause to pay national tribute to the greatest workforce the world has ever known, those who have made immeasurable contributions to the strength, prosperity, and well-being of our country. Join me in saluting the workers who build Navy and Marine Corps ships, aircraft and weapon systems, the Department of the Navy civilians who support our fleet, and the Sailors and Marines, deployed worldwide, especially in those grey hulls, ever present on the horizon. 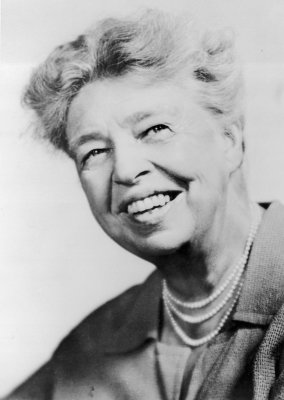 Eleanor Roosevelt on Labor Day: 'One of the Most Significant Days'
Next Up: Editor's Pick