JonBenet Ramsey: What to Know About the Beauty Queen’s Murder 20 Years Later

Nearly 20 years after the shocking death of a 6-year-old beauty queen piqued the public’s interest and plunged her closest family members under a cloud of suspicion, no one knows who killed JonBenet Ramsey.

The little girl’s murder remains a mystery even after police say investigators have collected 1,500 pieces of evidence and more than 20,000 tips, letters or emails. As a slew of TV programs return her story to the airwaves ahead of the anniversary, here’s what to remember about the case:

Who was JonBenet Ramsey?

JonBenet had been crowned Little Miss Colorado and National Tiny Miss Beauty, among many other titles, before she was brutally murdered around Christmas in 1996. She lived in Boulder, Co., with her then-9-year-old brother, Burke, and her parents, John and Patricia Ramsey.

What happened to her?

JonBenet was found bludgeoned and strangled in the basement of her family’s home, with duct tape across her mouth and throat, on the day after Christmas. Her father had discovered her body hours after the girl’s mother called 911 to report that her daughter had gone missing. Patricia, who was better known as Patsy, also told authorities that someone had left a ransom note demanding $118,000 inside the house.

An autopsy determined that JonBenet died of asphyxiation caused by strangulation, according to the Denver Post. Her death was ruled a homicide.

Though many people suspected that JonBenet’s parents were behind the crime (and Boulder police had early on said the married couple was under an “umbrella of suspicion”), John and Patsy remained adamant that they were innocent. The Ramseys were never charged in connection with the death. They believed an intruder killed their daughter and said “there is a killer on the loose” during an interview with CNN on New Year’s Day.

Prosecutors cleared JonBenet’s parents and brother in 2008 after DNA tests concluded that an outsider committed the crime. But the relief came too late for Patsy, who died in 2006 after battling ovarian cancer. The grand jury investigating JonBenet’s murder was dismissed in 1999. There were no indictments made after the jurors reviewed testimony of dozens of witnesses and 30,000 pieces of evidence for 13 months.

JonBenet’s father and brother have recently recounted the murder and its fallout, which included intense scrutiny, for new interviews that air this month. “We absolutely felt like we were the victim of a lynch mob led by the media,” John, 72, said in a documentary that aired last week on A&E. “There’s no question that the Boulder police department believed we were the killers.”

Burke, now 29, broke his silence in public for the first time in 20 years, revealing to Dr. Phil intimate details about what he can recall about his sister’s murder. “I want to honor her memory by doing this interview. I don’t want anyone to forget,” he says in the episode that is set to air Monday, the same day that Investigation Discovery airs JonBenét: An American Murder Mystery.

CBS also dove into the notorious cold case with a new docuseries that features several interviews with a team of experts trying to solve the murder.

Police say the investigation into JonBenet’s death is still open, although officials refuse to comment on the case. In a recent video statement, Boulder Police Chief Greg Testa said investigators have processed 1,500 pieces of evidence, including the analysis of more than 200 DNA samples. They’ve also received, reviewed or investigated more than 20,000 tips, letters or emails and have traveled to more than 18 states to interview about 1,000 people.

The department, Testa said, is still committed to finding justice for JonBenet two decades later. “Our goal continues to be an arrest and successful prosecution,” Testa said. “We have not and will not give up.” 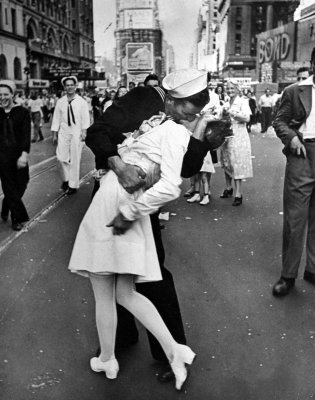 The Story Behind the Iconic WWII Kissing Photo
Next Up: Editor's Pick