How to Heal the Spiritual Pain of America

WIN-Initiative/Getty Images
Ideas
By Serene Jones
Rev. Dr. Serene Jones is President of Union Theological Seminary in the City of New York, where she also holds the Johnston Family Chair in Religion and Democracy. She is Vice President of the American Academy of Religion, an ordained minister in the United Church of Christ and the Christian Church (Disciples of Christ) and author of Trauma and Grace: Theology in a Ruptured World.

Over the past year, streams of commentaries have analyzed the ferocious and alarming combat marking this year’s presidential campaign. Few among them, however, include wide-ranging spiritual or theological accounts of what is transpiring. From where I sit, as a religious and spiritual leader, I see it as the manifestation of a profound spiritual crisis in our nation, one grounded in a deeply distorted view of ourselves, and our past and future.

As a theologian, I think about stories all the time because theology is nothing but big stories we tell ourselves about the universe and the meaning of our lives. We find these “ultimate” stories everywhere; they are conscious and unconscious, and not just in religious communities, but also broader, secular cultures.

As Americans, we have a “theological” national story we tell about our country. It begins with the Constitution and typically describes the constant progress that good people have made since the start. It’s a relentlessly positive story.

From a spiritual perspective, the problem is that this story has not incorporated a serious account of our wrongs. Our enduring flaws, profound failures, egregious harm and horrendous evils–none of these are part of our core story. The clearest example of this is our failure to sufficiently deal with our two most obviously horrific wrongs—the carefully orchestrated genocide of Native American and the 300-year-long story of the most brutal social system ever created, chattel slavery.

Why is this absence a spiritual problem? There is no religious or spiritual tradition, at least any worth their salt, that does not begin with a serious account of both the good and bad that people can do. There are many names for the negative side of human existence, such as sin, evil, illusion, moral absence, iniquity, transgression and negative karma. All recognize that human beings, alone and collectively, can do really bad things. This doesn’t mean we don’t have a good side. But these stories insist that if we do not existentially reckon with the ugly side of our beliefs and actions, we will not have healthy communities. Egregious harms will continue to unfold and profound despair and alienation inevitably set in. Why? Because deep down, we are living a spiritual lie.

I should add that in many traditions, spiritually reckoning with moral flaws and egregious harms is not considered debilitating but liberating and freeing. It allows people to be honest about their lives, and with this comes insight and fresh possibility. Any well-trained therapist would agree, as would evolutionary biologists, positive psychologists and a growing list of behavioral scientists.

So how does our failed national story relate to the present election? We see our American narrative cracking open under the weight of its lies, and all the harms of the past are coming up to grab us, not to let us go until we deal with them. This requires taking a spiritual stride forward in our understanding of our history and our humanity.

In short, we need a new common narrative, a new understanding of who we are as a country. A real story we can honestly live towards, one that is as spiritually deep as it is politically wide.

In its absence, several things are happening.

First, in the rhetoric of our presidential candidates, there are good people (their people) and bad people (their opponents). In this bifurcated world, the only way to describe those you disagree with is to cast them into the outer darkness. To demonize them. Sadly, there is no room for seeing the demon within one’s own position and party.

A second effect is that this story has inculcated in many white people who support Trump, the false belief that their people have been “only good” and they have been “making constant progress” from the beginning, and now they are losing it because of diversity.

This version of white history is simply not true, both historically and spiritually. Poor white working people—masses of them—have been disadvantaged by our economic system since the beginning. They have never had all the entitlements they think they have. Moreover, they (we) have been the principal perpetrators of great harms—slavery, genocide, gender/sexual violence and on and on—and these harms must be claimed and reckoned with, seriously. We must own those sins, as painful as they may be, if we are to go forward. Again, it is a spiritual matter.

Thirdly, when it comes to talk of “outsiders,” it is clear we need an updated immigrant story that avoids valorizing some and demonizing others. We need to speak of the long-standing, systemic flaws in our immigration policies. We also need to admit that, in principle, every immigrant is both as flawed and good as every citizen. No one has special standing when it comes to the capacity for good and evil. Moral innocence cannot be a box immigrants check. At a spiritual level, this is simply deluded.

A fourth effect of this spiritual flaw is embedded in the view of many millennials who support Bernie Sanders and Hilary Clinton. Because they have not been raised with a morally complex story about our country or given a spiritually complicated view of human beings, they believe that almost all political leaders and authority figures are corrupt and constantly plotting evil deeds. The flip side of this is they expect to find, in some future world, leaders who are purely good and promise continued progress, albeit in its liberal guise. Sadly, this imagined, morally perfect authority figure has never made a tough decision or a serious mistake. Indeed, the leader can’t actually be human. If this view of leadership continues, it does not bode well for the future of our democracy much less for the spiritual well-being of our communities.

Thus, on all sides of the political spectrum, deeply embedded spiritual failures are rearing their ugly heads, and we are swimming in a toxic brew of alienation and despair that we all feel.

Frankly, no matter who wins—I think it’s going to be Clinton—Trump’s people aren’t going away, nor are the millennials following Sanders and Clinton (who are sure to turn on her quickly). I fear the crisis may continue far into the future, generating more harms, suffering and shortsighted policies.

But we can choose a different spiritual path.

A refreshed, reinvigorated story of our nation needs to begin by saying: “We are human beings on this planet, and we are deeply flawed yet deeply good. We who live in the United States are part of a community known for its honesty and its openness, its ability to wonder and our willingness to take responsibility for our harms and seek redress.”

This American story weaves pain, failure, violence and tragic into its story of progress and goodness. If embraced, it has the power to take hold of our conscious and unconscious lives and bodies as well as our textbooks, religions, national stories and even families.

If we open to this deeper spiritual understanding of the nation, I believe we can truly become the “exceptional” country we hear so much about in American political speeches. This is the nation we do not yet have and hopefully want to become—together. 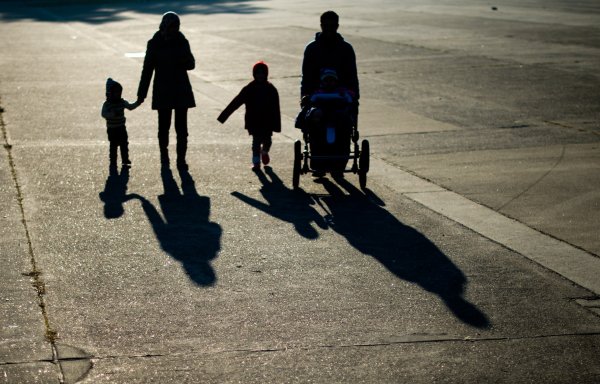 Is Germany Failing Female Refugees?
Next Up: Editor's Pick