A sign showing the bylaw forbidding women to wear Burkini at the beach in Nice, southeastern France on Aug. 19, 2016.
Jean Christophe Magnenet—AFP/Getty Images
By Rishi Iyengar

A court in the French city of Nice has struck down a controversial burkini ban on Thursday, nearly a week after local authorities chose to ignore an order to do so by the country’s top court.

In its decision, the local court declared that “insufficient grounds” existed to justify banning the covered swimsuit, Agence France-Presse reports. The garment is worn by observant Muslim women when enjoying such activities such as swimming and going to the beach.

The ban — which Nice was one of the first cities to enforce before about 30 towns in southern France followed suit — was largely prompted by fears of terrorism after a series of deadly attacks across the country over the past year. Nice was the most recent target of one of the attacks, when a man purportedly belonging to the Islamic State (ISIS) mowed down more than 80 people with a truck during a Bastille Day celebration on July 14.

However, the court ruled that the “emotions and the concerns resulting from terrorist attacks” do not constitute legal grounds to enforce a ban.

The outcry against the burkini has triggered a national debate over Islamophobia and religious freedom in secular France. Nice has been at the center of that debate, particularly after an image of policemen seemingly forcing a Muslim beach-goer to shed hers went viral last month. 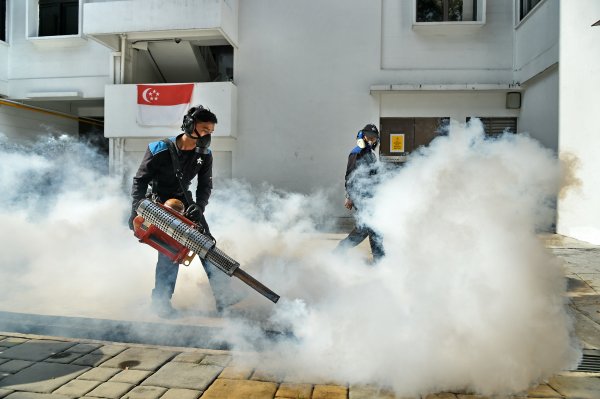 Singaporeans Wary as Zika Spreads
Next Up: Editor's Pick