Nearly 200 years after Georgetown University profited from the sale of 272 slaves, the university’s president urged the Georgetown community and institutions of higher education across the country to act on a “special responsibility” to repair racial divisions.

“We need to address, in our time, the consequences of the original evil of slavery, which were never ameliorated in any previous time,” President John DeGioia said on Thursday, noting the role universities play in providing historical context and shaping constructions of race.

He urged the community to recognize its past. “We have been able to hide from this truth, bury this truth, ignore and deny this truth,” he said.

DeGioia’s address elaborated on the university’s plan to acknowledge and address its ties to slavery, based on the recommendations of a working group on slavery, memory and reconciliation. Georgetown will rename two campus buildings in honor of two African-Americans: Isaac, a 65-year-old man who was the first slave to be sold by Georgetown in 1838, and Anne Marie Becraft, a free African-American woman who opened a school in the Georgetown neighborhood. The university will also give slave descendants the kind of admissions advantage offered to children of Georgetown faculty, staff and alumni.

Students who participated in the working group and pushed for changes through campus demonstrations said they were pleased with the university’s actions.

Crystal Walker—a 2016 Georgetown alumna who was part of the working group—was one of the students who organized demonstrations on campus last fall, pushing for the buildings to be renamed and adding urgency to the working group efforts.

“Slavery and racism were tied so intimately, the protests were not just about name change but the overall culture of race and diversity at Georgetown,” she said, adding that she’s excited to see the report be put into action, when it’s “not just words on a page.”

Connor Maytnier, a Georgetown senior who was a working group member, said he’s most impressed by the university’s financial commitment to the effort, which includes plans to erect a memorial dedicated to slaves and establish an institute for the study of slavery.

“I think it sends a strong signal that the university is committed to it,” he said.

The university did not establish a specific scholarship for the descendants but said they would benefit from Georgetown’s practice of admitting students on a need-blind basis and meeting the full financial need of enrolled students. 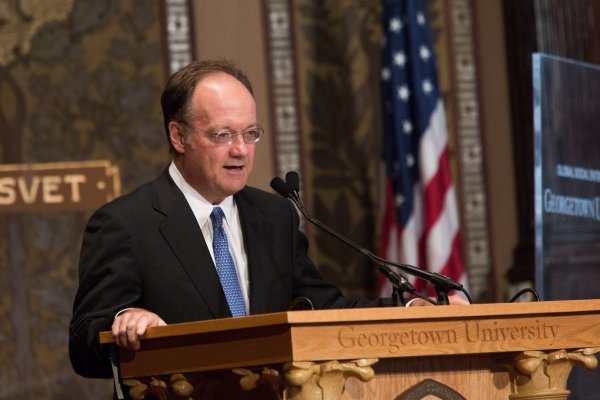