John Legend on Art, Activism and How Fatherhood Is Changing His Music

John Legend attends his introduction as a (BELVEDERE) RED Brand Ambassador at The Apollo Theater on August 27, 2016 in New York City. (Photo by Steve Mack/WireImage)
Steve Mack—WireImage
By Cady Lang

John Legend’s musical touch can be heard on everything from Lauryn Hill’s iconic album, The Miseducation of Lauryn Hill, to Ava DuVernay’s film Selma, for which he co-wrote the film’s Oscar-winning original song, “Glory.”

But Legend’s influence isn’t just musical. Recently he’s made headlines for his involvement in projects like Southside With You and his thoughtful discourse on social issues — most recently, the criticism surrounding Colin Kaepernick’s protest of the national anthem.

Legend says this is part of a conscious effort to work on projects that promote positive social change. He recently teamed up with Project Red, Belvedere and Ndebele artist Esther Mahlangu to create a special-edition bottle, where 50% of the proceeds will go toward helping to end the AIDS crisis. For Legend, art and activism aren’t separate passions — they’re influenced by one another.

TIME caught up with Legend to talk about his work with Project Red, how activism is shaping his art and what fatherhood means for his music.

TIME: Artists have always been a part of documenting change and charting the pulse of social movements throughout history, especially during times like the civil rights era, but it’s drastically different now with the Internet and social media. What do you think the role of artist as activist is now?

John Legend: I think we’re storytellers, we’re connectors. We have a platform where we engage a lot of people from different backgrounds and when we bring those people together, we have the power to inspire conversation. If we use that power effectively, it can be really meaningful. Bono is a really great example. He’s one of the founders of this [Project Red x Belvedere] campaign. He’s obviously made great art and is a great performer, but he’s used his platform to create change and inspire conversations that might not have happened without him.

Why did you want to get involved with Project Red and this project with Belvedere?

I love the idea of giving people a chance to buy a product they would buy anyways, but having the proceeds go to a great cause. And the HIV/AIDS crisis is something we can really end this generation if we focus our efforts on it. The Global Fund has been working to provide preventative services and antiretroviral medication to so many people in sub-Saharan Africa where the crisis has been most acute.

Right now, the entertainment industry is having a lot of conversations about diversity. Director Ava DuVernay has said she wants to focus on “inclusivity” as opposed to “diversity.” How do we create more spaces for inclusivity?

You have to put your money where your mouth is. For those who have the power to green-light projects, you have to hear from different voices. Sometimes it’s just depicted as white or black, but obviously America’s way more diverse — there are Asian Americans, Hispanic Americans and so many more stories that make America so interesting. I think it’s good business and it’s good for society to hear from these different communities on what’s important to them and how they want to be portrayed onscreen. So what we need is the people who control the development dollars to invest in these projects to allow these different voices to be heard.

I’m curious as to how you see this long-term as well — not just creating the space, but how you would change the culture.

Part of the artist’s job is to change the culture because you see different possibilities and we can only control so much. It matters what people are learning in school, it matters how they are raised by their parents, all these other things matter and they kind of comprise what culture means. But as artists, we have some control too — we tell stories and we humanize and add depth and context and nuance to people’s experiences. If we do that well and responsibly, we can make the world more inclusive and loving and accepting of each other.

You recently welcomed a daughter, Luna — how has being a father affected your craft? Has it influenced the projects you are involved in?

The inspiration of being a father has helped me write certain songs about what it’s like to be embarking on this new journey, so you’ll hear that in the new music that I release. I think part of it is thinking about my career and making decisions prioritizing things that matter to me the most because every moment I spend working is a moment I’m not home with my family, so it makes me realize I only want to do things that are important and I think are worth doing. More broadly, you just want the world to be the best place for your kid to grow up in — safe and loving and a place where she can dream anything and be able to do it. 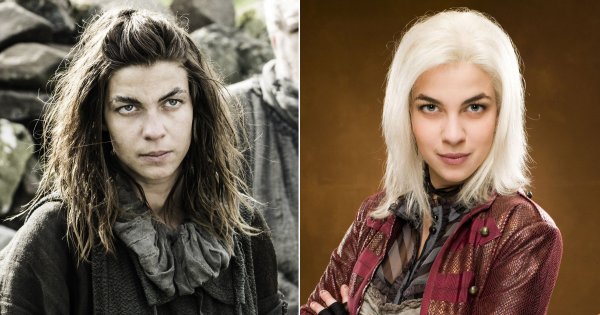 Wizards in Westeros: 8 Actors Who Went From Harry Potter to Game of Thrones
Next Up: Editor's Pick