Donald Trump laid out his most detailed immigration policy plans yet Wednesday night, including proposals to create a deportation task force that prioritizes those who have committed other crimes, benefit from government-assistance programs or who have overstayed their visas.

Trump aides had promised “clarity” on the candidate’s immigration plans, and he himself declared it a “detailed policy address.” But questions remain about what he would do if he was elected president.

How long would the wall be?

If there’s one thing Trump has been consistent about from the very beginning of his run, it’s that he wants to build a wall along the border with Mexico. He also still maintains that Mexico will pay for the wall, despite Mexican President Enrique Peña Nieto saying otherwise.

But Trump has not been consistent on how long or how high this wall will be. The wall has more than doubled in height in various speeches, with Trump occasionally threatening to add 10 more feet to it as punishment. He’s referred to it as 30 feet high up to 65 feet high. In terms of length, he has said both that the wall will cover the entire 2,000-mile border and that it will only need to be about 1,000 miles long because of other “natural barriers” along the way.

During his speech in Phoenix on Wednesday, the only clarity Trump lent to the hypothetical wall is that it will be “impenetrable, physical, tall, powerful [and] beautiful.”

What would he do about undocumented immigrants who don’t commit other crimes?

Trump has promised a new “deportation task force” as president, but when he outlined deportation priorities, he left the fate of millions of otherwise law abiding undocumented immigrants unclear. The official U.S. government estimate has 11 million undocumented immigrants in the U.S., although Trump argued that the number could range from 3 million to 30 million. He said that on his first day in office would begin deporting 2 million “criminal aliens,” and called for prioritized removals for those arrested for any crime, receive government benefits or have overstayed their visas.

But Trump left a gray area for the rest of those in the U.S. illegally. He said that “no one will be immune or exempt from enforcement” and ruled out a path to citizenship or legal status unless they first leave the country. But he did not specify whether he expected these people to remain under the radar in the country, self-deport, or whether he would actively round them up for deportation.

Does he support H-1B visas?

Trump has flip-flopped multiple times on H-1B visas, which are given to skilled workers, and he did not mention them in his new speech. On his website, Trump proposes raising the prevailing wage paid to H-1Bs and putting in a requirement for companies to hire American workers first. But in an October debate he seemed to soften his position, and when Fox moderator Megyn Kelly specifically asked him about it at a March debate, he acknowledged that his views were shifting. “I’m changing it, and I’m softening the position because we have to have talented people in this country,” he said.

But after the debate, he reversed his position back to the original, releasing a statement that said, “Megyn Kelly asked about highly-skilled immigration. The H-1B program is neither high-skilled nor immigration: these are temporary foreign workers, imported from abroad, for the explicit purpose of substituting for American workers at lower pay. I remain totally committed to eliminating rampant, widespread H-1B abuse. … I will end forever the use of the H-1B as a cheap labor program, and institute an absolute requirement to hire American workers for every visa and immigration program. No exceptions.” Then, in a subsequent March debate, he admitted to using the H-1B program as an employer but still said the program should end.

Trump’s stated position on his website remains the same, but mentioning the program during his new speech could have further clarified his position either way. 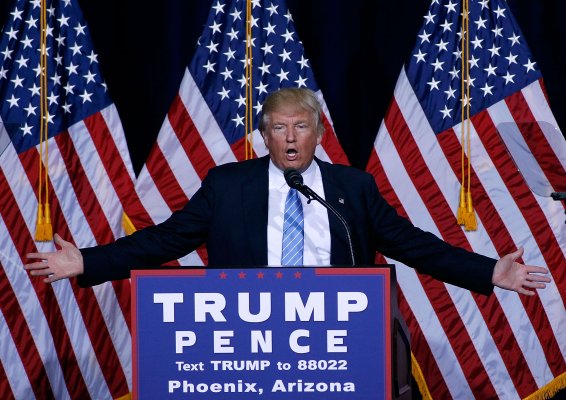 Donald Trump Pivots Back to Hard-Line Immigration Stance
Next Up: Editor's Pick