EpiPen Scandal Is Yet Another Sign of Coming Pharma Crisis

In 2007, when Mylan bought the device, a pair cost $93.88. More than 3.6 million prescriptions were written for EpiPen kits in 2015, according to IMS Health.
Getty Images
Ideas
By Peter Atwater
Atwater is the author of Moods and Markets and president of Financial Insyghts.

“I legislated” is not a phrase typically associated with corporate executives, who lack constitutional powers. Yet during a television interview on Aug. 25, Mylan CEO Heather Bresch used just those words as she described a program that expanded the availability of her company’s EpiPen epinephrine injectors, which deliver epinephrine during allergic reactions, in schools across the country. Bresch made herself personally responsible for the law.

As the daughter of Joseph Manchin III, the senior U.S. Senator from West Virginia, perhaps Bresch could be forgiven for her overreach. Still, what she unwittingly brought into the open was deeply revealing: when it comes to pharmaceutical policies, the line between the regulated and the regulators has become blurred.

The last time entanglement between the public and private sectors was this front and center was during the mortgage crisis. At the peak of the housing market, the roles of banking regulator and Wall Street banker—once appropriately adversarial—had morphed into one. Conflicts of interest and reasonable risk management were traded for profits.

Many of the same symptoms of overconfidence have been on display in the health care space—with similar consequences. Just as housing prices skyrocketed, thanks to lax regulation, abundant credit and Wall Street aggressiveness, so too have drug costs. Mylan is hardly alone in taking advantage of an environment ripe for excess, as we know from the fallouts at Turing Pharmaceuticals, where Martin Shkreli increased the price of an AIDS drug 5,456% overnight, and Valeant Pharmaceuticals International, where price increases were a regular and widespread business tactic. Starting when Mylan acquired the drug in 2007, Bresch raised the price of a pair of EpiPens (they’re sold in twos) more than 400%. As Bresch herself offered in that interview, the system “incentivizes higher prices.”

If history holds, those higher prices are about to be a thing of the past. In the housing crisis, voters were underwater homeowners; today they are price-wary health care consumers. With wage growth anemic, Washington has no incentive to support high drug prices and every incentive to cut them aggressively. And yet the pharmaceutical industry remains mulish. If Wall Street was tone-deaf to the plight of Main Street during the housing crisis, the pharmaceutical industry may lack ears altogether. Many industry executives not only fail to appreciate the current level of economic anxiety, but also underestimate the seething below that surface. Overnight, the EpiPen has become a lightning rod.

Already, consumer outrage has focused on Washington, where the FDA delayed a potential EpiPen competitor from entering the market. Meanwhile, a political group for Mylan has donated to many of the Senators on the Judiciary Committee that has asked Mylan to explain the price increases. (Mylan responded by agreeing to sell a generic version at half the price.)

According to the Center for Responsive Politics, the health care industry spent more than $509.8 million to lobby Washington in 2015. Which means a backlash is inevitable: I would not underestimate how far Washington will go in dog piling on drug companies with scrutiny and angry criticism in an effort to save face and restore confidence with voters. Wall Street bankers were Washington pariahs in 2008, but wait until you see the treatment of drug-company executives and lobbyists. Between the industry’s “abusive” pricing strategies and “unpatriotic” tax inversions, they’ll be toxic.

If you think EpiPen-demonium is bad, just wait until voters begin to hear about the premium and deductible increases associated with next year’s health care plans. Immigration is about to be replaced with an angry debate on soaring health care costs.

When it comes to our perceptions, one is an event, two is a pattern, three is a trend, and four is fact. After Shkreli, Valeant and Theranos (where greed was a driving force playing to the same incentives), Mylan is fact; and for consumers, that fact is that the pharmaceutical industry is broken and corrupt. Spending $600 for a few bucks’ worth of a lifesaving medicine is simply too ridiculous to even try to reconcile.

But where a similar environment of unbridled excess brought shame to Wall Street a decade ago, this crisis will envelop the entire Eastern seaboard, where so many of these companies are based. While neither the drug industry nor Washington yet realize it, this time they will be under the microscope together. 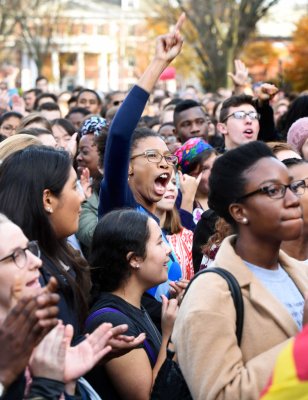 Kareem Abdul-Jabbar: Political Incorrectness Is Just a Strategy
Next Up: Editor's Pick