The New Politics of Gun Control

New Hampshire Senator Kelly Ayotte’s biggest challenge stood just a few feet away from her at the rustic cottage near Concord. While Ayotte made her rounds, posing for pictures and hugging friends, retired teacher Ellen Bryan wiped sweat from her brow and described why she had not yet made up her mind about who she would vote for in November.

Bryan, 64, likes the Republican Ayotte and even said she leaned toward supporting her, but then tears welled in her eyes as she remembered the 2012 mass shooting in Newtown, Conn. She also remembered Ayotte’s decision to vote against tighter gun laws in the aftermath. “I’m not a gun fan,” said Bryan, a self-described military brat who grew up around guns and has family members who hunt. “There’s a time and a place for everything, but there are too many guns. How can you make sure gun owners are responsible?”

New Hampshire’s motto is “Live free or die,” a centuries-old rallying cry for armed revolution, but these days more residents seem to prefer to live free with at least some restrictions on their weapons. Since Newtown, polls in New Hampshire have shown that a large majority of residents support universal background checks on gun purchases, which Ayotte opposed. Her Democratic challenger, Governor Maggie Hassan, twice vetoed measures to allow concealed carry in the state without a permit. Her approval ratings didn’t tank, and the Republican-controlled legislature didn’t override her vetoes. Now Hassan is running slightly ahead of Ayotte in recent head-to-head polls, cheering Democrats, who need to pick up just four seats in the U.S. Senate–and the White House–to regain control.

What is true in New Hampshire is true nationwide. Polls show about 9 out of 10 Americans support universal background checks on gun purchases and a majority support bans on high-capacity magazines. As the country becomes more urban and more diverse, some pollsters find fewer people telling them they have a gun at home than at any other point in almost 40 years. Democrats, emboldened by the data, are on the offensive. Hillary Clinton has made the fight for background checks a centerpiece of her campaign, hammering Donald Trump and vowing to take on what she calls “the gun lobby.”

Then there is the money that is flooding airwaves. “Outside groups, funded by lots of liberal outside special interests, are sort of trying to bury me,” Ayotte told the crowd near Concord. Americans for Responsible Solutions, the gun-violence-prevention group founded by attempted-assassination survivor Gabby Giffords and her husband Mark Kelly, has made New Hampshire a top priority this fall and has already spent $2.3 million against Ayotte. A super PAC backed by former New York City mayor Michael Bloomberg, a fierce gun opponent, spent more than $1 million against Ayotte before she even started running for re-election and is ready with more cash.

All Ayotte can do is carry on and hope her dawn-to-dusk campaign schedule can overpower the outsiders. “I am going to be myself,” she told TIME between campaign stops in Manchester on Aug. 18. “The people of New Hampshire, that’s what they expect. They want someone who is able to have a level of independence and ability to work with other people. That’s what I’ve done in the Senate.” This year that may not be enough, for her or her party.

That guns are even a central issue in 2016 is something of a turnaround. The last time this happened in a national election was in the wake of a 1994 assault-weapons ban that then President Bill Clinton signed into law just 56 days before the midterm elections. Gun-rights groups mounted a ferocious countercampaign, and Democrats lost a net 54 seats in the House and eight in the Senate. Clinton said the vote on guns “devastated” his party’s majorities in 1994 and probably hurt Al Gore’s chances of winning the White House in 2000. After that, Democrats tended to look the other way when it came to gun control–or even touted their support for guns. Three weeks before the 2004 election, Democratic nominee John Kerry went duck hunting in Ohio. Hillary Clinton ran in 2008 as a champion of gun owners, attacking Barack Obama on the issue from the right.

But the political calculus has changed. Grisly mass shootings now seem commonplace in churches, workplaces and schools. Fears of lone wolves with semiautomatics seem to have grown. While gun murders are about half what they were in 1993, the statistics are little comfort in the face of such high-profile incidents.

In Ohio, Democrat Ted Strickland, once rated A+ by the National Rifle Association (NRA), decided to run for the Senate this year without the camouflage he wore in past campaigns. GOP Senator Ron Johnson of Wisconsin, who is in a tough re-election fight, now says he’s open to some concession. And Ayotte has begun to emphasize her ability to negotiate a deal on guns that would stop those on the terrorist watch list from getting weapons. Meanwhile, Pennsylvania Senator Pat Toomey, a Republican who broke with his party to champion background checks in 2013, appears to be holding his own in his re-election race, with help from some of the same outside groups attacking Ayotte.

Senator Chris Murphy, a Connecticut Democrat, says the shifts are likely to last. Where once Democrats were told to avoid guns, they are now advised to embrace the issue as a political winner. “It’s become a litmus test for Democrats,” he told TIME over breakfast in Stamford, Conn. “You have to be strong on the issue of guns, or you are ineligible for leadership in our party.”

For gun-rights groups, the change in the mood has raised more concern than alarm. None of this changes the NRA’s resolve or its record of winning several local races and state legislative victories in recent years. “The stakes for law-abiding gun owners have never been higher,” said Jennifer Baker, a spokeswoman for the NRA’s political arm. “The 2016 election is about the fundamental right to own a firearm in your home for self-protection, a right the majority of Americans support.”

Gun-rights supporters point out that the increased background checks of private and gun-show sales that Democrats and Toomey supported would not have prevented Newtown or the ISIS-inspired murders in San Bernardino, Calif., and an Orlando nightclub, which all involved guns purchased from gun stores with full background checks.

But political consultants say the public demand for some action short of gun confiscation remains very real, though the language candidates use can matter a great deal. Democratic pollster Anna Greenberg, who works with Giffords’ group, tells clients to talk about “the gun lobby” but not the NRA, which in many voters’ minds is about hunting and sport. She tells candidates to talk about closing loopholes, not about stricter gun laws. Never promise that anything is a fix-all or use the loaded phrase gun control.

Following this script, the Democrats devoted prime-time hours of their four-day nominating convention in Philadelphia in July to gun safety, lining up victims’ families, advocates and celebrities to bemoan the atrocities committed by horrible people who should never have had access to guns. When Clinton picked Tim Kaine as her running mate earlier that month, she celebrated the fights he waged against the NRA after the Virginia Tech campus massacre in 2007. “Make no mistake, behind that smile, Tim also has a backbone of steel,” Clinton said. Her advisers think guns, including support for reviving the assault-weapons ban, could help Clinton break through with female voters who are reluctant to trust her.

Republicans, meanwhile, featured more-traditional fare at their party convention in Cleveland, including a speech from Chris Cox, the top lobbyist for the NRA. Trump has met resistance to his fealty to gun backers in unlikely places. “To my friends at the NRA, I understand your concern about denying somebody the right to buy a gun,” said South Carolina’s Lindsey Graham at the Capitol in June. The Senator has been working with Ayotte to block suspected terrorists from buying weapons. “That’s a constitutional right. But every right–whether speech or buying a weapon or any other constitutional right–has boundaries on it.”

Ayotte was still a relative newbie in the Senate when Newtown unfolded, and she took a look around her native New Hampshire and decided supporting the post-Newtown bill wasn’t what her constituents had in mind when they elected her just two years earlier. Guns have been as much a part of New Hampshire’s DNA as maple syrup, Dunkin’ Donuts and ice cream socials on the town green.

But the state’s demographics have changed as refugees from Massachusetts and others not steeped in Granite State traditions have moved in. Everywhere Ayotte, a former state attorney general, went, she faced tough questions on guns. Giffords showed up in New Hampshire to push stricter gun laws. The daughter of the Sandy Hook Elementary principal confronted Ayotte at a town-hall-style meeting. Ayotte felt things shifting under her, and she wasn’t wrong.

That’s left Ayotte little room to pivot, but she’s trying. She tells constituents that there are two pieces to any gun legislation she supports: keeping guns out of the wrong hands and protecting the rights of well-behaved Americans. She maintains that the 2013 bill she opposed would have created federal overreach by eliminating a loophole for private sales at gun shows, but she could support banning gun sales to the roughly 1,700 Americans who get extra scrutiny when they try to take commercial flights. The Orlando shooter was on that list for 10 months.

Even this tiny shift has caused some problems for Ayotte. “She came across as a big conservative for New Hampshire,” 73-year-old Goffstown retiree Roger Sheehy said before an event for Republican VP nominee Mike Pence that Ayotte skipped. “That lasted half a year. Now she’s doing everything with Jeanne Shaheen,” Sheehy added, invoking New Hampshire’s other Senator, a Democrat. “Has she forgotten that this is a guns state?” As during Ayotte’s 2010 race, the NRA is not spending money to help her.

Meanwhile her rival, Hassan, has been unforgiving. “When it comes down to gun safety, she has had more than one opportunity to vote for bipartisan legislation,” Hassan told TIME during an Aug. 19 interview in her second-floor office in the state capitol. “She has been standing with her party and the gun lobby on this repeatedly.”

Listening to Ayotte, it’s obvious she struggles to do right by her divided constituents. She is no absolutist on guns, especially after the years she spent as a state prosecutor who met with victims’ families and sent their attackers to jail. So she is positioning herself as a potential dealmaker. “No matter who wins the presidency and who wins the Senate, you still need both parties, generally, to get things done,” she says. “You’re going to need people who are problem solvers and bridge builders.” Which means whatever the outcome in November, the people of New Hampshire will be sending a unexpected message on guns from the floor of the U.S. Senate in 2017. 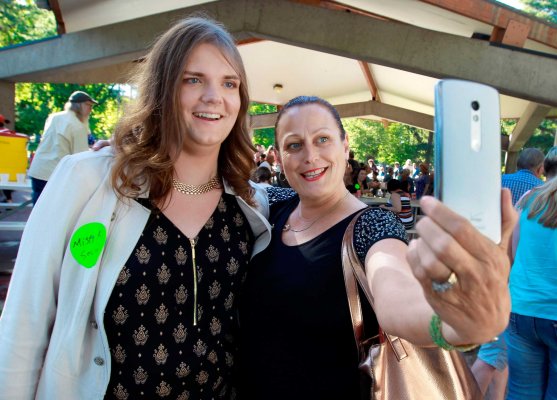 A Candidate In Utah Blazes a Trail Just by Being Herself
Next Up: Editor's Pick