Yale students at a protest against racial insensitivity last November
Arnold Gold—New Haven Register/AP
Ideas
By Kareem Abdul-Jabbar
Abdul-Jabbar is a six-time NBA champion and league Most Valuable Player. He is the author of the new book, Writings on the Wall.

According to many politicians, America has a life-threatening illness more deadly than the Zika and Ebola viruses combined. Its name: political correctness. Since the early 1990s, politically correct has been the go-to phrase to whip up support from people who think social tolerance has become threatening, excessive or frivolous. The 2016 presidential campaign has been especially virulent about the issue.

This apocalyptic backlash against what seems like a relatively benign combination of good old-fashioned manners and simple sensitivity toward others stems from several factors, including a growing rage, fear and frustration among many Americans as the country continues to evolve into something different from what they are used to. Just as it did for their parents and grandparents. New technology can make us feel foolish, rapidly changing trends make us feel marginalized, and the eroding of our familiar and comforting traditions leaves us uncertain and uncomfortable. Every generation must deal with mourning the loss of its good ol’ days. It’s hard for many Americans to reconcile their romanticized fantasy of Main Street USA with today’s reality. The truth is that only 46% of children 18 and under live in a home with two heterosexual parents who are in their first marriage. In 1960, 73% did. But Mayberry isn’t coming back.

Right now, this understandable but misplaced angst is directed at incidences of political correctness that seem to go to new extremes to avoid insulting, offending or marginalizing anyone. We all get that. It seems as if every day there’s another report of some public officials’ overreacting to a perceived insensitivity. A survey at Yale University had 63% of students wanting professors to issue “trigger warnings” before saying anything that some might find offensive or could cause painful emotions. Many critics have described this new avoidance of microaggression as coddling students, who should expect their opinions to be challenged in college to better prepare them for the real world outside. That “coddled” assessment seemed confirmed when 25 students at UCLA staged a sit-in because a professor had corrected the spelling and grammar errors on graduate-level essays. They accused him of creating a “hostile campus climate” for students of color. Students at the University of New Hampshire were issued a list of resources to help them avoid offensive language such as American (because it suggests the U.S. is the only country in the Americas), homosexual (PC version: “same-gender-loving”), elderly (“people of advanced age”) and healthy (“nondisabled”). Comedians Jerry Seinfeld and Chris Rock have said the climate of political correctness is so restrictive that they have stopped performing on college campuses. Comedian Bill Maher has complained of “political-correctness Nazis” who “hound me to censor every joke and apologize for every single slight.”

For many Americans, the abuses of political correctness extend to beloved social traditions. Saying “Happy holidays” instead of “Merry Christmas” seems to some a sinister attempt to restrict religious expression rather than a way to include non-Christians in the holiday spirit. A school in Connecticut attempted to ban Halloween costumes out of concern that some children might feel “excluded from activities due to religion, cultural beliefs, etc.” Angry parents quickly forced a reversal of that policy.

Here’s the problem with using these examples to attack the validity of political correctness: every political and social policy or tradition has examples of excess. We don’t define the value of a policy based on incidences that might seem extreme. We can point at the absurd behavior of zealots around all our most cherished values. We poke fun at “helicopter” parents for being overprotective of their children, but that doesn’t mean we want to erase safety laws and policies that protect kids.

We can look rationally at the original problem that political correctness was supposed to address and ask if it’s had a significant effect in making things better. The success rate of political correctness is difficult to judge because there are so many other factors that can influence an outcome, including not knowing how many generations have to commit to political correctness in order to scrub out the centuries-old biases of America’s collective unconscious. For now, it’s a declaration to the world, not unlike our Declaration of Independence, that America stands for certain inalienable rights.

There is some evidence that it works. Research at Cornell University concluded that political correctness may aid the creativity of mixed-gender work teams. “[Political correctness] facilitates idea expression by reducing the uncertainty that people tend to experience while interacting with the opposite sex,” said Jack Goncalo, an associate professor of organizational behavior. “Establishing a clear guideline for how to behave appropriately in mixed-sex groups made both men and women more comfortable sharing their creative ideas.” Even on a purely anecdotal level, we can look around and see younger generations growing up to be more aware of instances of discrimination based on gender, race, religion or gender identity and not accepting it as the status quo. Armed with this awareness, they will be more self-reliant, stronger and more tolerant of others. Better Americans.

Yet opponents are using extreme examples to do exactly what we were doing before political correctness pointed out the racism, misogyny and homophobia embedded in the cultural foundation of America. Which is to do nothing. Deriding political correctness gives people permission not to fix a problem, because we can claim instead that it doesn’t exist. The real problem, they want to tell us, is the cure. As do vaccination deniers and climate-change skeptics. Or all those hardcore smokers back in the 1960s and 1970s who laughed at the warning labels about the damage cigarette smoking could do. They accused the government of being too much of a scolding parent. Rallying that ol’ “We’ll show you government intruders who’s boss” spirit, smokers boosted cigarette sales by more than 7.8 billion in 1966, the year the labels first appeared on cigarette packs. To prove the government’s point, about half of all those who smoke regularly will die prematurely. This doesn’t include the damage to nonsmokers who are harmed by secondhand smoke or by their mothers’ smoking while pregnant. Arrogantly clutching onto wrongheaded traditions is damaging to the country.

At a rally in February, Trump repeated with mock shock what a woman in the audience had just shouted about Cruz: “She said—I never expect to hear that from you again! She said: ‘He’s a pussy.’ That’s terrible.” Of course, the audience shouted its approval, even as Trump pretended to be offended.

Sure, we could all laugh at his frat-boy humor and call him a straight-talking regular Joe. But there are serious consequences to insulting someone by calling him or her a vagina. Every time we laugh at this context, we’re endorsing the continuing narrative of women as less than men. Every time a male coach berates his players by referring to them as “ladies” or tells them to “hike their skirts” while playing, we’re perpetuating an atmosphere where women are not men’s equals.

The anti-PC rhetoric is a clever tool by politicians who wish to distract voters from the real issues by tapping into their darkest fears about people who are different from them and, at the same time, allowing the politicians not to have to fix the problem. It’s the magician’s trick of misdirecting the audience’s attention to the left hand while the right hand does the work. It’s genius–as long as voters are zombified to the point of not thinking for themselves.

Which is exactly what politicians want. They want you to feel and behave like children while they pretend to be the all-knowing benevolent father. While they rile you up about how immigrants are stealing your jobs, they distract you from enlightening facts, including the assessment of some experts that the influx of Latino immigrant workers of the past 25 years has had less effect on employment patterns than factories that moved abroad, the decline of labor unions and the recurring recessions. So while we’re told to focus on building a massive wall to keep out immigrants, the real causes of job loss and economic instability continue unabated.

Of course, to be PC, it should read, “When I became an adult.”

Abdul-Jabbar is a six-time NBA champion, a TIME contributor and the author of Writings on the Wall, from which this was excerpted. 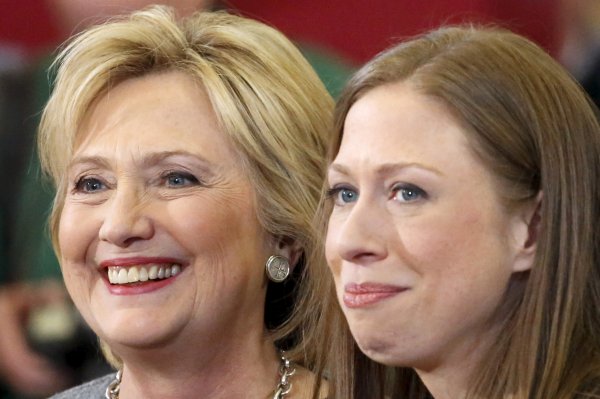 Chelsea Clinton Says She Trusts Hillary Clinton More Than Anyone Else
Next Up: Editor's Pick