Stranger Things, which had such a childlike innocence vibe probably because of all the innocent children in it, just confirmed its second season.

On the Netflix show, the closer Will got to the end, the cuter that kid looked. Top it off with a crack team of cuties determined to find him who never stopped being adorably brave. Finn Wolfhard (Mike), Millie Bobby Brown (Eleven), Gaten Matarazzo (Dustin), Caleb McLaughlin (Lucas), and Will (Noah Schnapp), were the smallest kids of the cast with some big performances. Turns out, in real life, these actors do really cute things too. And like you, they take such a delight in all of this cuteness.They’re still lapping up the spotlight and on Wednesday night, the kids will continue their victory lap with a pit stop at The Tonight Show Starring Jimmy Fallon.

Here are the top ten ways they proved they were adorable as ever on social media.

1. When Millie Bobby Brown who plays Eleven, did her best Winona face:
Watch her frantically find Noah Schnapp who plays Will to celebrate the announcement of the show’s second season.

2. When they realized they had really famous fans:

Brown, really committing to Aaron Paul’s great idea to take her away from her family so she can be his new daughter.

But then they correctly concluded that famous people just weren’t as cool as they are:

After total card Robert Downey Jr. demonstrated how jealous he was that he didn’t get to be one of the Stranger Things kids, Dustin quickly shut him down.

3. When these two did the 22 push-up challenge:
Finn Wolfhard did it to raise awareness for the mental health of military veterans after his “best buddy” Gaten Matarazzo nominated him. It was too cute to be real, but it really was real.

4. This epic montage:
It might make you cry as hard as you did when Hopper and Joyce saved Will.

5. When the boys all dabbed:
Because they’re getting a season two, and you get a season 2 and everyone wins.

6. This Stranger Things team family huddle:
You weren’t there, but it still restored faith in humanity.

7. When Caleb and Millie met for the first time:
Caleb wore a bucket hat! Millie had hair!

Another group hug because the scariness of the show in virtual reality form was way too much for kids this young.

10. When they did music and it was all you could handle:

11. When Stranger Things won best show of the year at the MTV TV and Movie awards and the kids got right down to thank you’s for the Duffers and Netflix like a bunch of old pros. “Also, where would we be without our parents?” Gaten Matarazzo asked. “Because we would not be here quite literally.” 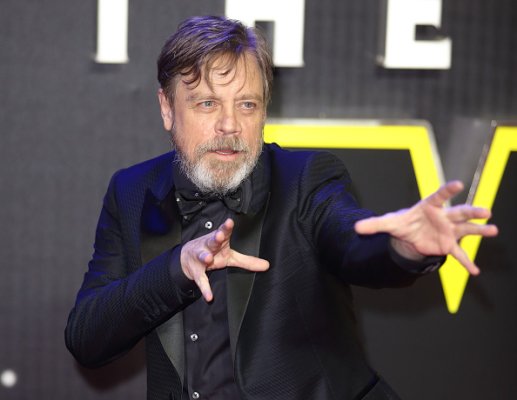 Mark Hamill May Have Given Away a Huge Spoiler About Star Wars: Episode VIII
Next Up: Editor's Pick