College Degrees Are Due for Reform

Can we fix higher education? Is it possible to reform an institution so plagued by bloated costs, academic failure, debt and political correctness? And why would this time be different?

The questions sound naïve since so many previous attempts have failed to dent academia’s stubborn resistance to change. Nearly three decades ago, I wrote a book called ProfScam, an admittedly harsh indictment of American colleges and universities and professors. “The result is a modern university distinguished by costs that are zooming out of control,” I wrote in 1988, “curriculums that look like they were designed by a game show host; nonexistent advising programs; lectures of droning, mind-numbing dullness often to 1,000 or more semi-anonymous undergraduates… teaching assistants who can’t speak understandable English; and the product of this all, a generation of expensively credentialed college students who might not be able to locate England on a map.”

Having set out my critique and hopeful suggestions, I wrote, “Help is on the way.”

But it really wasn’t. Not only did nothing change, but almost everything I described in the book got worse, from the flight from teaching to the crushing level of student debt.

But the prospects for reform are better now than they were 28 years ago. There are three reasons for guarded optimism: First, the higher education bubble—$1.3 trillion in student debt—that has raised new questions about the cost and value of college; second, new technologies that threaten the status quo such as MOOCs; and third, a willingness to contemplate big, bold reforms.

To finally reform higher education, we should start by asking fundamental questions, such as: Why does it take four years to get a degree?

There is, after all, nothing sacred about four years. Why not three? Or two, or one? As author and education critic Charles Murray has noted in his book Real Education, students who want to be software designers, accountants, hospital administrators, high school teachers, social workers, journalists, optometrists or interior designers do not need to spend four years in college. Classes that would allow them to obtain “the academic basis for competence” would take one or perhaps two years. The rest is merely time-wasting, expensive filler.

If a university announced that henceforth, it would be offering a three-year bachelor’s degree, in one stroke it would cut the cost of a college education and provide a distinctive way of competing for students—as well as put the institution on the cutting edge of reform.

But there is an even more radical idea: Wedding the three-year degree to Massive Open Online Courses—an idea that could change the basic nature of higher education.

Futurist Nathan Harden sees the MOOCs as a mighty and irresistible model of creative destruction: “The live lecture will be replaced by streaming video. The administration of exams and exchange of coursework over the Internet will become the norm… Universities will extend their reach to students around the world, unbounded by geography or even by time zones. All of this will be on offer, too, at a fraction of the cost of a traditional college education.”

The results, he wrote, will be apocalyptic: “The future looks like this: Access to college-level education will be free for everyone; the residential college campus will become largely obsolete; tens of thousands of professors will lose their jobs; the bachelor’s degree will become increasingly irrelevant; and ten years from now, Harvard will enroll ten million students.”

The MOOCs would challenge the status quo on just about every level of higher education, from admissions to teaching to the granting of coveted degrees. When universities no longer hold the keys to those credentials, their world will be rocked. This is not only disruptive. It is breathtakingly radical. The MOOCs are anti-elitist and profoundly meritocratic. There would be no barriers to entry, no SAT or ACT scores, no legacy admissions preferences, no class or race bias, no affirmative action, no bloated lists of extra-curricular activities—just the willingness to do the work and to achieve mastery. Equally radical, they would shift power from the institution to the student as academia decentralizes in a way familiar to so many other industries that have found themselves upended by consumer-driven on-demand models. Let’s imagine this possible future:

Rather than showing up with a degree from the U of Somewhere with a simple BA degree, a student arrives for her first interview with a degree or a bundle of certificates of mastery that includes courses with world-class scholars.

She can show her prospective employer a stacked portfolio that includes a course in artificial intelligence from Stanford, courses in computer science from Cornell and Harvard, a course in Alexander the Great from Wellesley, a course in environmental law from Yale and a course in globalization from Georgetown. Her degree also includes “verified certificates from Princeton for a course in the ‘paradoxes of war,’ a course from the Copenhagen Business School in ‘social Entrepreneurship,’ and the University of Pennsylvania’s ‘Analyzing Global Trends for Business and Society.’”

She can moreover show that in each of those courses she achieved actual mastery, in contrast to other graduates who may have gotten credit for C-level work in far less demanding classes.

And our applicant shows up without a mountain of debt, since she was able to get her degree for a fraction of what her peers pay.

That student could mark the beginning of the end for the business model that has sustained higher education for decades. Colleges and universities would have to be smaller, more nimble, more focused on students. But they could replace much of their lost tuition revenue by offering a richer array of offerings to a much wider audience of potential students. Of course, academia has proven remarkably resistant to change. But it’s just possible that this time may be different. 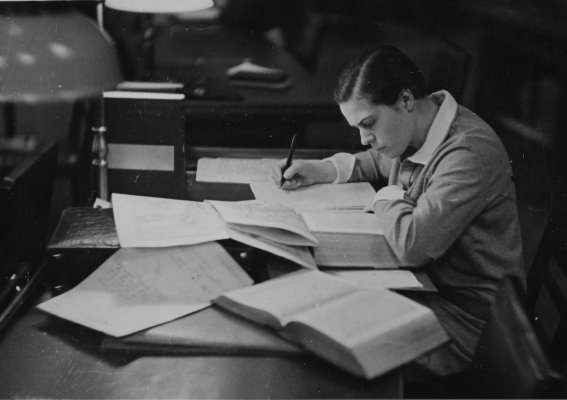 Putting the Rising Cost of College in Perspective
Next Up: Editor's Pick