Screens In Schools Are a $60 Billion Hoax

Second graders work on iPads as part of their classroom work in a Utah elementary school on Monday, May 20, 2013.
George Frey—Bloomberg/Getty Images
Ideas
By Dr. Nicholas Kardaras
Dr. Kardaras is the author of the new book Glow Kids: How Screen Addiction is Hijacking Our Kids—and How to Break the Trance.

As the dog days of summer wane, most parents are preparing to send their kids back to school. In years past, this has meant buying notebooks and pencils, perhaps even a new backpack. But over the past decade or so, the back-to-school checklist has for many also included an array of screen devices that many parents dutifully stuff into their children’s bag.

The screen revolution has seen pedagogy undergo a seismic shift as technology now dominates the educational landscape. In almost every classroom in America today, you will find some type of screen—smartboards, Chromebooks, tablets, smartphones. From inner-city schools to those in rural and remote towns, we have accepted tech in the classroom as a necessary and beneficial evolution in education.

This is a lie.

Tech in the classroom not only leads to worse educational outcomes for kids, which I will explain shortly, it can also clinically hurt them. I’ve worked with over a thousand teens in the past 15 years and have observed that students who have been raised on a high-tech diet not only appear to struggle more with attention and focus, but also seem to suffer from an adolescent malaise that appears to be a direct byproduct of their digital immersion. Indeed, over two hundred peer-reviewed studies point to screen time correlating to increased ADHD, screen addiction, increased aggression, depression, anxiety and even psychosis.

But if that’s true, why would we have allowed these “educational” Trojan horses to slip into our schools? Follow the money.

Education technology is estimated to become a $60 billion industry by 2018. With the advent of the Common Core in 2010, which nationalized curriculum and textbooks standards, the multi-billion-dollar textbook industry became very attractive for educational gunslingers looking to capitalize on the new Wild West of education technology. A tablet with educational software no longer needed state-by-state curricular customization. It could now be sold to the entire country.

This new Gold Rush attracted people like Rupert Murdoch, not otherwise known for his concern for American pedagogy, who would go on to invest over $1 billion into an ed-tech company called Amplify, with the stated mission of selling every student in America their proprietary tablet—for only $199—along with the software and annual licensing fees.

Amplify hired hundreds of videogame designers to build educational videogames—while they and other tech entrepreneurs attempted to sell the notion that American students no longer had the attention span for traditional education. Their solution: Educate them in a more stimulating and “engaging” manner.

But let’s look more closely at that claim. ADHD rates have indeed exploded by 50 percent over the past 10 years with the CDC indicating that rates continue to rise by five percent per year. Yet many researchers and neuroscientists believe that this ADHD epidemic is a direct result of children being hyper-stimulated. Using hyper-stimulating digital content to “engage” otherwise distracted students exacerbates the problem that it endeavors to solve. It creates a vicious and addictive ADHD cycle: The more a child is stimulated, the more that child needs to keep getting stimulated in order to hold their attention.

Murdoch’s Amplify wasn’t the only dubious ed-tech cash-grab. The city of Los Angeles had entered into a $1.3 billion contract in 2014 to buy iPads loaded with Pearson educational software for all of its 650,000 K through 12 students—until the FBI investigated its contract and found that now-former Superintendent John Deasy had a close relationship with Apple and Pearson executives. (Before the deal was killed in December 2014, the Pearson platform had incomplete and essentially worthless curriculum and such feeble security restrictions students that bypassed them in weeks.)

Despite the Amplify and LA debacles, others still seek to convince naïve school administrators that screens are the educational panacea. Yet as more American schools lay off teachers while setting aside scarce budget dollars for tech, many educators and parents alike have begun to ask: Do any of these hypnotic marvels of the digital age actually produce better educational outcomes for the kids who use them?

We could look to Finland, whose school system routinely ranks toward the top globally and has chosen to skip the tech and standardized testing. Instead, Finnish students are given as many as four outdoor free-play breaks per day, regardless of the weather—while here, a sedentary American child sitting in front of a glowing screen playing edu-games while over-scheduled and stressed by standardized testing is seen as the Holy Grail.

Dr. Kentaro Toyama, an associate professor at the University of Michigan’s School of Information, once believed that technology in the classroom could solve the problems of modern urban education. No Luddite, he had received his Ph.D. in computer science from Yale and had moved to India in 2004 to help found a new research lab for Microsoft; while there, he became interested in how computers, mobile phones and other technologies could help educate India’s billion-plus population.

Rather than finding a digital educational cure, he came to understand what he calls technology’s “Law of Amplification”: technology could help education where it’s already doing well, but it does little for mediocre educational systems. Worse, in dysfunctional schools, it “can cause outright harm.” He added: “Unfortunately, there is no technological fix…more technology only magnifies socioeconomic disparities, and the only way to avoid that is non-technological.”

The list of supporting education experts and researchers is long:

There has also been surprising research coming out of Canada: Students don’t even prefer e-learning over traditional education. In a 2011 study, researchers found that students actually preferred “ordinary, real-life lessons” to using technology. Those results surprised the researchers: “It is not the portrait that we expected, whereby students would embrace anything that happens on a more highly technological level. On the contrary—they really seem to like access to human interaction, a smart person at the front of the classroom.”

We are projecting our own infatuation with shiny technology, assuming our little digital natives would rather learn using gadgets—while what they crave and need is human contact with flesh-and-blood educators.

Schools need to heed this research in order to truly understand how to best nurture real intrinsic learning and not fall for the Siren song of the tech companies—and all of their hypnotic screens. 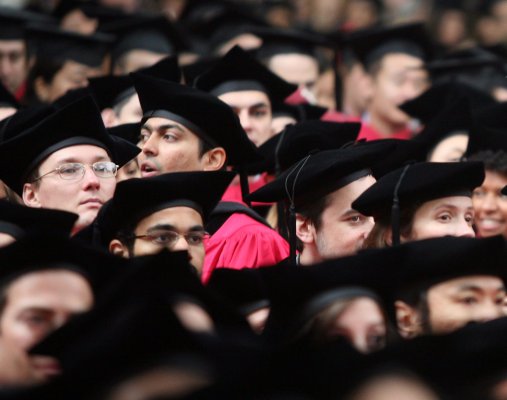 College Degrees Are Due for Reform
Next Up: Editor's Pick