Portfolio
Ideas
By Ed Conard
Ed Conard is an AEI Visiting Scholar, former Bain Capital partner and author of the new book The Upside of Inequality and Unintended Consequences

Blaming the success of America’s 1% for the slow growth of middle- and working-class incomes leads to policies that slow an already slow-growing economy. A shortage of properly trained talent and risk-taking limit the growth of America’s innovation-driven economy. In those circumstances, growth can manifest itself as an increase in employment or an increase in wages.

When America spreads talent and entrepreneurial risk-taking over a greater number of workers, it slows middle- and working-class productivity and wage growth. U.S. employment has grown twice as fast as Germany and France, and three-times faster than Japan since 1980. America is now home to 40 million foreign-born adults, their 20 million native-born adult children and their 20 million children—a large share of America’s 325 million people. Despite this influx of workers, median disposable incomes are 15% to 30% higher than Germany, France and Japan, and have grown faster than these countries since the mid-1990s. Without the disproportionate contribution of American-made innovation, European and Japanese growth would have been even slower.

America has produced a disproportionate share of innovation with a smaller share of high-scoring workers. Twenty-five percent of Americans earn high academic scores, compared to more than 35% of Germans, 40% of Scandinavians, and nearly 50% of Japanese. High-earning Americans work longer hours, take more entrepreneurial risks and produce more innovation than their counterparts elsewhere. Despite the supposed success of Scandinavia, Scandinavian-Americans earn 50% more than their counterparts in Scandinavia.

America’s entrepreneurial success gradually creates assets that accelerate its growth. Companies, like Facebook, provide Americans with valuable on-the-job training. Those workers coalesce into synergistic communities of experts, like Silicon Valley. Success puts money into the pockets of successful risk-takers. They use their equity and expertise to underwrite risks that accelerate growth. These assets raise the productivity of American innovators and increase the certainty of their success. Given the faster growth of these American assets, it’s hard to believe higher and more certain payoffs for risk-taking don’t gradually motive talented workers to get the training and take the risks that produce innovation, growth, employment, and higher wages.

Instead, advocates of redistribution cavalierly diminish the importance of incentives. They claim the success of America’s 1% stems from rising cronyism despite overwhelming evidence that the status quo has grown less entrenched. Seventy percent of the wealth of the top 0.1% is owned by self-employed business owners who bested competitors to satisfy customers, not cronies, to earn their success. Today, the Forbes 400 richest Americans are “less likely to have inherited their wealth or to have grown up wealthy” and “more likely to have started their businesses.” Similarly, average CEO tenures have shortened. Public company CEO pay has not risen faster than private company pay where owners, not cronies, control boards. Nor has CEO pay risen faster than the value of the companies they manage. Instead, the rise in CEO pay comes almost entirely from the formation of new companies with high employee pay rather than from increased CEO pay relative to their employees.

Failing these arguments, some insist rising company profits stem from a lack of competition that puts money in the pockets of investors at the expense of customers. They point to evidence showing “two-thirds of all publicly traded companies operated in more highly concentrated markets in 2013 than they did in 1996.” But the turnover of the S&P 500 has accelerated. And a 2015 McKinsey study finds that the share of profits generated by idea-intensive companies has grown from 17% of profits in 1999 to 31% today while “companies in capital-intensive industries are feeling a growing squeeze.”

The IT sector is in turmoil, the opposite of an entrenched status quo. The 15 largest technology companies in 2000 have lost 60% of their market value, while 15 companies with combined market capitalization less than $10 billion in 2000 are now worth over $2 trillion. Despite these one-in-a-million successes, the Kauffman Foundation finds: “[venture capital] returns haven’t significantly outperformed the public market since the late 1990s.”

Crony capitalism exists. But growing inequality is caused, not by rising cronyism, but by America deploying its properly trained talent and risk-taking more effectively than other economies.

The challenge facing America today is not how to defeat the success that brought it here, but how to accelerate growth, employment, and wages in an economy with a near-unlimited supply of low-skilled labor. To raise low-skilled wages, without slowing GDP growth, America must increase the ratio of high to low-skilled workers. Throttling back low-skilled immigration might increase wages, but the cost of retiring baby boomers and the growing military threat of China loom large. Japan, for example, is expected to lose a third of its population by 2060. A better strategy trains America’s talent to be more effective, recruits ultra-high-skilled talent from abroad, lowers taxes on American-based international competitors, and restrains perennial trade deficits without restraining trade. 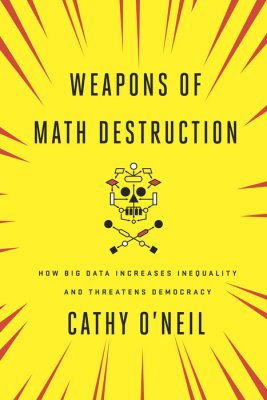 Big Data Comes With the Biases of Its Creators
Next Up: Editor's Pick