Why Uber Is Trying To Make Nice With Its Drivers

Uber, the ride-hailing juggernaut valued at some $68 billion, has made headlines lately by promoting pilot plans for driverless vehicles. But at the moment, the San Francisco, Calif. startup is intensely focused on shoring up its relationship with its human drivers.

Since it was founded seven years ago, Uber has taken enough investment capital to turn it into the world’s most valuable startup. Its global reach, market share, number of customers, and revenues have surged. And yet the company, to some extent, is still searching for a business model. Uber is a private company and doesn’t disclose the details of its finances. But earlier this month, Bloomberg reported that the firm has lost at least $1.27 billion in the first half of 2016. Losses over the course of the firm’s existence, the report claimed, total at least $4 billion—an unprecedented figure even compared to Amazon, whose founder and CEO Jeff Bezos is famous for being willing to lose massive sums to gain market share, as well as infamous dot-com busts like Kozmo.com, Pets.com and Webvan.

If the reports are accurate, much of those losses are due to subsidies Uber provides its drivers. Indeed, Uber’s relationship to its drivers is at the center of its competition with rivals, including ride-hailing startup Lyft as well as old-line taxi and limo services — they all need drivers, after all. The firm also spends a lot to attract passengers with discounts and other perks, gaining market share and thereby making the service more attractive to prospective drivers.

Uber has been working overtime recently to woo new drivers and satisfy existing ones. For example, on August 31, Uber announced a new arrangement with Stride Health, primarily a healthcare broker for workers in the so-called “gig economy” who lack many of the benefits of traditional full-time employment. Stride has been offering Uber drivers access to private health plans for two years. Now the company has released a new app free to Uber drivers intended to help them log their mileage and other expenses for the purpose of increasing their tax deductions. (Drivers could, for instance, deduct the depreciation of their vehicles if they own them.)

“Drivers start their day by tapping ‘go,’ and we’re tracking their mileage throughout the day,” says Stride Health CEO Noah Lang. “We also plug directly into their bank account, so we’re tracking other expenses and your income so you can understand where you’re missing opportunities and how to maximize your take-home income.” In an email, Uber Director of Business Development Jeff Miller said the app would make driving for the company “more rewarding and stress-free.”

The deal came on the heels of a similar arrangement with Betterment, an algorithmic retirement planning platform. Uber drivers who open a retirement account with Betterment have their fees waved for the first year, after which they’ll be charged at a rate of 0.25%. And earlier this year, Uber struck a deal with a major labor union allowing New York drivers to bring complaints to the company on a regular basis. That arrangement, however, stopped short of creating a formal driver’s union with the power to bargain over fares, which are set by the company. (The New York guild mirrors similar groups in California and Massachusetts that were to be set up under a settlement recently rejected by a federal judge.)

Uber has billed the moves as attempts to better the lives of its drivers. The company has been criticized for not offering full-time employment to workers. Being a driver can be difficult, with take-home pay fluctuating depending on changes in fare rates, gas prices and miles driven. Several Uber drivers told TIME they’re more interested in partnerships or features that put more money immediately in their pocket, like the addition of an in-app tipping feature. Tax deductions, however, are more of a delayed reward.

“Some of the partnerships are definitely more helpful than others,” says Harry Campbell, who runs The Rideshare Guy, a popular blog for drivers. “Generally, it’s a trend we’re seeing, but as a driver myself and somebody who listens to a lot of drivers, a lot of these partnerships don’t always affect their bottom line. I think that’s the biggest thing—if partnerships are affecting their bottom line, then they’re something that would be welcome.” Campbell also highlights new features in Uber’s app for drivers, including one dubbed Instant Pay that allows workers to collect money they’ve earned right away rather waiting for a weekly bank deposit.

Taken together, Uber’s efforts start to look like a patchwork version of the benefits enjoyed by workers in the “regular” economy, who often have an easier time filing taxes, participating in employer-based retirement plans and, in many cases, the right to unionize. Yet Uber and other gig economy companies argue their workers are not employees but independent contractors. Uber has said it is merely providing a technology platform connecting drivers with paying passengers.

That stance has fueled Uber’s growth but also created headaches for the company. Drivers have filed lawsuits demanding to be recognized as full employees, calling the company’s model into question. Deals with companies like Stride and Betterment, as well as new features like Instant Pay, could help appease restless drivers. (Uber also maintains a delicate balance between satisfying riders and drivers by lowering fares while subsidizing drivers to make up for their losses.)

Uber’s projects, meanwhile, to potentially replace some human drivers with computers—which don’t need unions, healthcare, or retirement plans—are still in the earliest stages. CEO Travis Kalanick is adamant that self-driving cars don’t represent a threat to jobs. “I can imagine 50,000 to 100,000 drivers, human drivers, alongside a million-car network,” he told Business Insider. “If I was working full-time, I would be scared,” says Robert Berger, a 65-year old Florida retiree who drives for Uber for extra cash. But, he adds, “I don’t think it’s going to happen quickly.” 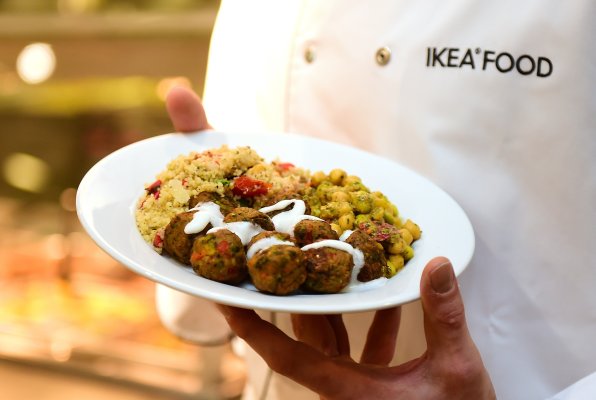 IKEA Wants You to Build Your Own Food Now
Next Up: Editor's Pick