Nearly seven decades after her father convened a conference on the future of one of the world’s most ethnically diverse nations, Aung San Suu Kyi on Aug. 31 kick-started a new national reconciliation summit in Burma.

Dubbed the 21st century Panglong — after the town where national hero Aung San held his 1947 confab in the months before Burma’s independence from the British — Suu Kyi’s five-day peace conference boasts a formidable to-do list: ending some of the world’s longest-running civil conflicts; reining in a powerful army with little respect for rebel militias; promoting trust among ethnic civilians who have endured decades of repression at the hands of the Burmese army and some of their own insurgents; and encouraging development in frontier lands that, despite Burma’s most bountiful natural resources, remain some of the poorest in an already poor nation.

Ethnic groups make up some 40% of the population in Burma, known officially as Myanmar. But since independence, the Shan, Karen, Kachin, Chin, Rakhine, Mon, Wa and Kayah — to name some of the larger minorities among Burma’s 135 officially recognized ethnicities — have chafed at governments led by the nation’s Bamar, or Burman, majority. Throughout the decades, dozens of insurgent groups have battled the Tatmadaw, as Burma’s army is known.

During a Wednesday speech kicking off the peace effort, Suu Kyi, who is the nation’s State Counselor because an army-backed constitution precludes her from serving as President, struck a momentous tone: “This is a unique opportunity for us to accomplish a great task that will stand as a landmark throughout our history,” said the Nobel Peace Prize laureate, whose National League for Democracy (NLD) now runs much of the government. “Let us grasp this magnificent opportunity with wisdom, courage and perseverance and create a future infused with light.”

U.N. Secretary-General Ban Ki-moon is attending the summit, as are representatives from 17 of Burma’s 20 largest ethnic groups. Many of the 2,000 or so attendants showed up in the colorful headdresses — beaded, brocaded, feathered and horned — that are still common among Burma’s ethnic peoples. But even as Burma prepared for the landmark summit, fighting still festered in the country’s northern and eastern swaths. More than 240,000 ethnic people, mostly Kachin and Shan, have had to flee their homes during the past five years, while another 100,000 refugees, many Karen, are loath to return home from camps in Thailand.

Separately, tensions remain high between ethnic Rakhine (or Arakanese) in the country’s far west and a mostly stateless Muslim population that calls itself the Rohingya. Since ethnic unrest broke out in 2012 in Rakhine (or Arakan) state, local authorities have confined some 120,000 Rohingya to squalid camps; thousands have tried to escape the country by a dangerous sea route. The 21st century Panglong conference, however, will not address the fate of the roughly 1.1 million Rohingya since they are not one of Burma’s recognized ethnic groups.

So sensitive is the fate of the Muslim minority, which many in Burma consider to be composed of illegal immigrants from Bangladesh, that Suu Kyi’s NLD government has advised against even uttering the word Rohingya. Instead, the NLD administration has called for the term “Muslims in Rakhine” to be used. During a press conference with Suu Kyi on Aug. 30, Ban described the persecuted group as “Rohingya” and urged equality and harmony for all people in Myanmar. The NLD has set up a special commission to investigate the situation in Rakhine state, which will begin sessions next week headed by former U.N. Secretary-General Kofi Annan. There are no Rohingya on the commission.

Aung San, an ethnic Bamar and founder of the modern Burmese army, held his 1947 conference in the hill town of Panglong in order to gain support for independence from some of the former British colony’s most powerful frontier groups: the Shan, the Chin and the Kachin. Ethnic leaders were promised a federalist autonomy and even the possibility of seceding from the union should they prove dissatisfied with the new nation. But Aung San — father to Suu Kyi, as well as an entire nation — was assassinated months later, before Burma became independent in 1948. A coup in 1962, which ushered in army rule for nearly half a century, strangled the promise of Panglong. Many of the ruling junta’s generals earned their stripes battling ethnic militias, like the Karen who rebelled months after Burma became independent.

While the ruling army has at times attempted to negotiate with various ethnic armed groups, a national peace has never held. A so-called national cease-fire agreement signed last October by the quasi-civilian government that preceded the current administration hardly deserved its title, given that the eight signatories were either minor fighting forces or had already ceased battling the Tatmadaw. During his opening remarks at the peace summit on Wednesday, Burma’s military commander in chief, Senior General Min Aung Hlaing, promised that “the Tatmadaw will continue to support the peace process” but also warned that “we should have a dialogue for peace without being too ethnocentric.”

For many of the ethnic representatives gathered in Naypyidaw, the nation’s capital, the mood seemed more cautious than celebratory. In last year’s election campaign, the NLD vowed that bringing peace to Burma would be its foremost concern. Suu Kyi’s party prevailed, even in many ethnic areas that in previous elections had favored ethnic parties. But with army offensives against rebel armies flaring on the eve of Wednesday’s peace summit, some ethnic politicians wondered how committed the Tatmadaw is to true peace.

While some say Suu Kyi can only strengthen Burma’s fragile democracy by working with the military that kept her under house arrest for most of two decades until her release in late 2010, her extensive outreach has perplexed others. “It seems to us, those in the ethnic political circles, that [Suu Kyi] is listening to the Tatmadaw most of the time instead of listening to the ethnic stakeholders,” says Cheery Zahau, a Chin political activist. “We will have to see whether she is genuine or not in her promises to work for long-term peace and national reconciliation.”

For many ethnic politicians and armed groups, federalism is the only form of government they will accept. They want control over the jade, timber, natural gas, hydropower and other treasures that are disproportionately concentrated in ethnic regions, even as they have languished in poverty. “For around 70 years, the central government or Burmese dictatorship controlled all our natural resources and got trillions [in money] from ethnic lands,” says Kachin political activist Lum Zawng. “We need state constitutions to guarantee and protect our natural resources, our land and our rights. There is still no federal government in Burma, just a unitary government.”

Some armed groups aren’t taking part in the peace summit, such as the Arakan Army and a small but strong force of ethnic Chinese called the Kokang that battled the Tatmadaw last year. Few women are at the conference unfolding in the capital even though they have been at the forefront of civil-society organizations that have cared for ethnic populations traumatized by decades of fighting. Also iced out are representatives from some ethnic political parties that did not fare well in last November’s elections. Sai Lynn Myat of the Shan Nationalities League for Democracy is in Naypyidaw but notes that the political party’s chairman is absent from the peace forum. “We will listen but this is not an inclusive process,” he says. “I don’t have too much hope.”

Indeed, few expect much in the way of tangible results from the five-day summit. There are worries that expectations of a sweeping national reconciliation will be dashed — at the expense of the NLD’s reputation. Still, the fact that a 21st century Panglong is happening at all is remarkable for a nation that until very recently was ruled by a military brass bent on exterminating ethnic armies. “There is a long road ahead,” acknowledged the U.N.’s Ban on Wednesday, during his opening remarks. “But the path is very promising.” 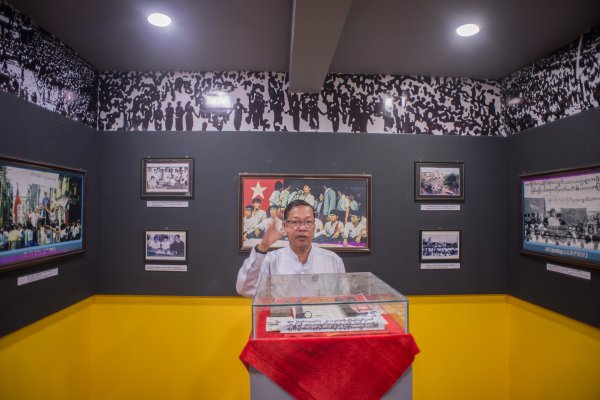 How Will Burma Remember Its Political Prisoners?
Next Up: Editor's Pick