What I Want to Do to My Teenager's Phone

“In five to 10 years, it will be considered very irresponsible parenting to give a child a naked smart phone.”

This is a tech executive talking. He’s pitching me the advantages of a new app that can pretty much shut down a child’s phone with the merest touch of a button.

With this app, says Ralph Acosta of TeenSafe, I can press a simple button on my phone’s screen and I can pause my child’s access to their phone for as long as I want. No matter where my kids are, the phone won’t work. It will only make calls to me. Or the cops. I can schedule times for the phone to be out of service—during school, or dinner, or homework or when they should be sleeping. Or, when they’re being annoying. Or won’t unpack the dishwasher.

Or, you know, always.

Little does he know, this tech guy, he’s preaching to the choirmistress. He’s selling me on an app that to my mind, will solve all my parenting problems. Doesn’t every parent of a child older than 12 fantasize about making a juvenile Steve Jobs or mini Mark Zuckerberg or tiny Tim Berners-Lee stand in the corner until they promise not to invent things?

That lethal combination of the ability to talk to your friends at all times about anything, with video and photo and, occasionally, anonymity, means my offspring have attention and enthusiasm for virtually no non-virtual interactions. And, yeesh, the stuff they post.

Of course I could always just take the phones away, but then I can’t reach them ever. Or I could shut off the data, but then the kids still have access to the big distracting world out there via the pesky wifi.

After hearing about TeenSafe, I begin to dream about my children’s phones the way I imagine Donald Trump dreams about Florida; if I could just hold sway over it for a little while, my life would be so much easier. No more exhausting circular discussions about how homework takes so much longer if you keep getting distracted by new Instagram comments. No more wheedling them to put the phone down and come to dinner. No more cranky agitation over plugging the phone in away from their bedrooms at night. Press a button on your phone and their phone is off. Boom.

But how to get the kids to agree to such an imposition? How to persuade the canary to enter the cage?

And then, the impossible happens. A child gives me a phone, unlocked. (Screen replacement; third one in 12 months.) I can install any app on it I like, even one with as uncool a name as TeenSafe. I am a few minutes—and probably some technical complications—away from slaying the beast. My kid wouldn’t know what hit her until (fiendish laugh) her phone suddenly ceased to work. I pay for the phone, I reason. I am totally allowed to do this.

And once the app has been installed, the folks from TeenSafe confirm, the child cannot uninstall it.

But then I blow it. I decide to ask some experts on tech and parenting on whether it’s a good idea.

“Definitely not behind a child’s back,” says Yalda T. Uhls, author of Media Moms and Digital Dads. “When you first give a child a phone, if you are transparent and get buy-in from kid, I think it’s a good idea to look at their messages and shut down phone at night. But I would back off quickly if they are making good decisions.”

Too late for that. We made our kids sign a contract when we got them their phones, with all sorts of common sense stipulations about times of use and what may or may not be forwarded. They are in flagrant non-compliance.

I turn to Devorah Heitner, author of the new book Screenwise: Helping Kids Thrive and Survive in Their Digital World.

“An app feels like a handy solution,” she says. (Yes!) “But there’s no app that has the discernment that you do.” (Nooooo!)

Installing an app on an offspring’s phone without their permission, or covertly spying on their texts or social media conversations, means that parents lose an opportunity to talk about what’s going on.

“Most kids are not involved in a sexting ring,” says Heitner. “You’re going to be reading a lot of boring stuff.”

And when parents do see something that alarms them on one of their espionage missions, do they react and blow up the trust in the relationship or do they have to sit back and fret until the kid comes to them for help?

“How bad do they have to mess up before you step in?” asks Heitner.

Moreover, she points out, there’s no app that can teach delayed gratification or discipline, the twin peaks of self control that every teenager must climb if they are to pass into adulthood. Heitner has come across parents who use geolocating apps to check if their kids are going to class at college.

“I prefer to mentor rather than monitor,” says Heitner. “But mentoring is a lot more work.”

This means getting off your phone, trying to balance your work and life and what she calls “cocreating conversations” with teenagers about appropriate limits. Heitner suggests asking about their hopes and aims, then figuring out what they need to do to achieve them and working back on how much screen time/sleep they expect they will need from there.

She also has suggestions about how much parents should check their kids phones (with permission, alas), starting at about once a day when they first get them, every now and then through middle school and working up to almost never, unless you suspect something life-threatening, as they reach the upper limits of high school.

That would be fine, if teenagers were reasonable or didn’t have a capacity for negotiation that made FARC look reasonable. I was just weighing up what is prudent versus what is possible when, as happens in so many enterprises with indecisive leaders, time ran out. Our appointment at the screen replacement place was upon us and I had done nothing.

Looks like I’m going to have to install the app the old-fashioned way. Bribery. 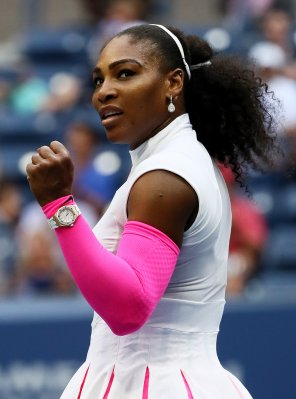 Nike Ad Calls Serena Williams the ‘Greatest Athlete Ever’
Next Up: Editor's Pick