Google Is About to Take On Uber in a Big Way

Google is expanding a ride-sharing service that would directly compete with Uber and similar companies, the Wall Street Journal reports, the latest development in the two firms’ dissolution from partners to rivals.

Google’s service, which will be available through the company’s Waze navigation app, would essentially work as a digital carpooling platform, linking paying ride-seekers with drivers headed in the same direction. The company has been testing the service on a small scale but is now ready to expand it more broadly across San Francisco, the Journal reports.

Unlike Uber and its nearest rival, Lyft, Google will not yet take a cut of drivers’ fares. That means it won’t make money anytime soon — but thanks to Google’s lucrative advertising business, that doesn’t necessarily need to happen right away. (Uber, meanwhile, is spending heavily on driver subsidies.) The fares, meanwhile, will be modest, meaning Google’s service might nab would-be Uber passengers, but it isn’t likely to attract professional drivers to switch over.

Yet Google’s move is another wrinkle in the increasingly strained relationship between itself and Uber.

The firms have ties dating back to 2013, when the search giant’s venture-capital arm invested $258 million in the ride-hailing startup. With that investment also came Google Chief Legal Officer David Drummond, who took a seat on Uber’s board of directors. However, Drummond left that position several weeks ago amid mounting competition between the two firms in both ride-hailing and autonomous-driving technology. Earlier this month, Uber announced an ambitious driverless pilot program in Pittsburgh set to begin later this year. Google, meanwhile, is developing self-driving cars of its own.

The situation has left the two companies in an awkward place. Google, now part of Alphabet, remains an investor in Uber. And Uber CEO Travis Kalanick offered a polite statement on Drummond’s departure, saying that he looks “forward to continued cooperation and partnership.” Yet the firms are challenging one another to shape the future of transportation and logistics, lucrative fields that hold the promise of great riches for the victors. This particular battle is just getting started. But, not unlike the war between Google and Apple over smartphone software, it’s bound to have some very interesting results. 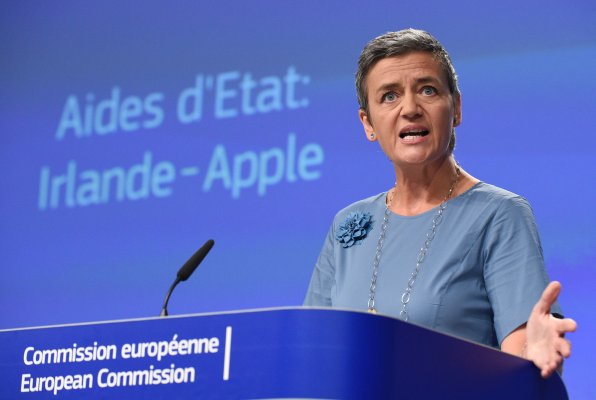 Apple vs. the E.U. Is the Biggest Tax Battle in History
Next Up: Editor's Pick