I was only 12 when I left the U.K. and moved to Germany for three months in 1970 to film my part as Veruca Salt in Willy Wonka & the Chocolate Factory.

As the only child actor who was not accompanied by a relative, I was quite homesick—I’d never have allowed my own children to have gone off alone like that! But the wonderful cast and crew took care of me, and my family were amazed at all the kindness I received from Gene Wilder and the rest of the studio.

Gene was sweet, patient and tolerant on set. He was a generous-spirited man, great fun, and spoke to the kids as adults. He never patronized us and we always vied for his attention; there was a constant race to get our schoolwork done so we could hang out with him. There was never any “Go away, don’t bother Mr Wilder,” stuff—he was always very amenable.

He didn’t sit in a trailer but had a chair, like the rest of us. Gene had no ego—which is pretty extraordinary for someone so talented. He had a dressing table somewhere, but I hardly ever saw him go there; I think he got changed in the morning and changed at night and that was it—the rest of the time he was on set.

Gene wasn’t a method actor and did take direction, but he was always creating his own thing. We never quite knew what we were going to get from him, particularly the boat scene in the film, when he went slightly loopy— whether that was improvisation or not I’ll never know, but we certainly didn’t see it coming!

Some fans expect Gene to have been a prankster on set, because he was such a funny guy, but he wasn’t. I think people are slightly disappointed when they hear that—they want him to be crazy like the parts he plays, but he was just a guy sitting in the corner watching things go along with a cup of coffee in his hand and just joining in, very much part of the ensemble and not the star.

However, I do remember him taking the mickey when I had to do my, “Who ever heard of a snozzberry?” line. He knew I couldn’t put my tongue back in my mouth because they’d painted it with red food coloring and powder, so he’d do things to try and make me laugh which was funny—and annoying!

The camera doesn’t lie about warmth. Gene was extremely kind, and I don’t think all the chemistry in the film would have come across if he wasn’t. That scene at the end of the movie, when he gives Charlie Bucket a hug and says “My boy”—that sums him up to me.

On my thirteenth birthday, in 1971, he arranged for color stills—which were very rare—to be taken and gave me a set of them as my present. It was a lovely gesture, and I still have them all. I filmed my favorite scene that same day—when I finally get my comeuppance and go down the garbage shoot. Everyone sang happy birthday before shoving me down it.

None of us realized at the time how big the film would be, that three or four generations of a family would sit and watch and love it 45 years later. I was only 12—when you’re 12, a long time away is the end of term. Back then, movies came out and they lasted for a few weeks, then disappeared, but with the advent of DVDs and cable TV, the film became big again in the late 80s. I still get recognized—it’s bizarre!

In Gene’s latter years, he became a private person—quite shy. He did a signing not that long ago and sent a message to all of us kids, sending his love. We were happy to hear from him but that was the first time I began to realize he wasn’t 100%; he had cancelled a few things, which wasn’t like him. His illness was kept under wraps, but I’m not surprised, as that’s the way he would have wanted it. When I heard he had died I wasn’t shocked, we all know that none of us are getting any younger and we knew it was going to come some day – but it’s still very sad.

I found out the news about Gene’s death through a friend in the U.S., who contacted me to ask whether I’d heard. After that, hundreds and hundreds of condolence messages came in thick and fast—which goes to show how loved he was, and what a special part he played in other people’s lives. My friend said Gene’s death marks the end of an era and it certainly does. It’s a very sad day.

Since we filmed Willy Wonka, I saw him twice in person. Once was in 1996, when he headed a production of Laughter on the 23rd Floor, in London’s West End. I went to say hello to him backstage and he gave me a big hug and said, “Well, I guess Veruca wasn’t such a bad egg”. I saw Gene again a few years ago when he was on the British chat show This Morning, after he had written his autobiography. He was so sweet and gave me the biggest hug and held on tightly to my hand.

I’m no longer acting—around 10 years ago I trained as a child therapist, which I really enjoy. But something that’s never changed over the years is how someone’s face lights always up when they find out you’ve been in the film. We call it the Wonka effect—just mention Willy Wonka to someone having a bad day and they’ll smile.

I’m still in touch with the other children, and in a few weeks I’m traveling to the U.S. to see Mike Teevee and Violet Beauregarde. We’ll raise a glass to Gene and relive all our favourite moments over again. It will be bittersweet. 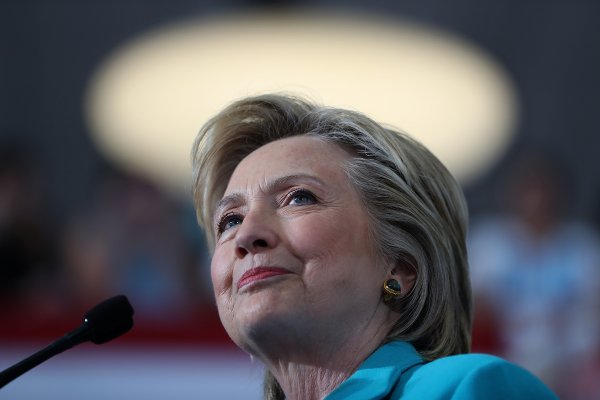 Hillary Clinton Is America’s Machiavelli
Next Up: Editor's Pick