An age-defying star designated as IRAS 19312+1950 exhibits features characteristic of a very young star and a very old star.
NASA/JPL-Caltech
By Marisa Gertz

12,000 light-years from Earth, in the Milky Way, lies a star 10 times as massive as the sun and emits 20,000 times as much energy. It has been puzzling scientists for over a decade.

The star glows bright orange in the center of the image above, taken by NASA’s Spitzer Space Telescope, and is surrounded by a cloud of chemically rich material, shown in vivid green. The questions scientists are asking is: is this massive star very old or very young?

At first, evidence seemed to suggest that the star was old, in the last stages of its life. Scientists noted the presence of masers, intense radio sources that are observed almost exclusively in late-stage stars.

However, the composition of the cloud surrounding the star suggested youth—a protostar, and further observations in infrared, the wavelength Spitzer operates in, buoyed the case for a young star. Peering through the dust and ice in infrared revealed that the star was much brighter than originally thought and revealed that the cloud was collapsing, which happens when a star is growing.

“No matter how one looks at this object, it’s fascinating, and it has something new to tell us about the life cycles of stars,” said Steven Charnley, a Goddard astrochemist and co-author of the paper in the Astrophysical Journal describing the team’s findings. 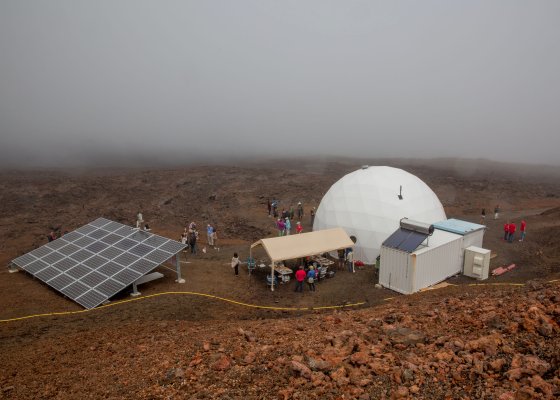 Six Astronauts Spend a Year on Mars — in Hawaii
Next Up: Editor's Pick