Why Washington Decided to Kill Off Once-Endangered Wolves From Helicopters

Wildlife agents in Washington state have killed six of 11 wolves that were ordered to be eradicated after they repeatedly attacked cattle.

State biologists fatally shot two members of the “Profanity Peak” wolf pack from a helicopter in early August after five fatal wolf attacks on livestock were confirmed. But further lethal-control efforts were called off before being renewed on Aug. 19, Reuters reports. So far, the wolves have either killed or injured 12 cattle, officials said.

The state decided to kill all 11 wolves after the state’s Fish and Wildlife Department found the same pack was responsible for an attack that left two calves dead and a third injured, according to Reuters.

Since the renewal, four more wolves—including a pup—were killed via aerial attacks, and wildlife agents are reportedly still looking for the remaining five members of the pack.

“We’ve never taken out an entire pack before,” Craig Bartlett, a spokesman for the Fish and Wildlife Department, told Reuters.

According to Bartlett, officials can still decide to spare the remaining wolves if attacks on livestock stop.

The Profanity Peak wolves make up one of 19 wolf packs known to inhabit Washington, and the current effort to kill off the pack marks the third time officials have killed wolves in the state. Officials lifted Endangered Species Act protections for gray wolves in the eastern third of the state in 2011, according to Reuters.

A total of 10 wolves were killed in 2012 and 2014, although some members of those packs were spared, Reuters reports. 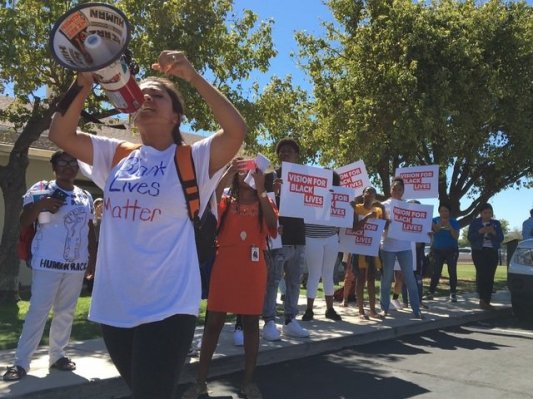 She Was Banned From Wearing a Black Lives Matter T-Shirt, So Her Classmates Walked Out
Next Up: Editor's Pick