Putting the Rising Cost of College in Perspective

Work table of a female student. About 1930.
Imagno / Getty Images
By Lily Rothman

As American college students get ready for the new semester, many of them and their families have more on their minds than homework: the problem of paying is a national one. The questions of free college, student-loan restructuring and how to get the most bang for your tuition buck are debated at the highest levels of politics and around kitchen tables.

Which is nothing new. A look at TIME’s archives reveals that fretting about the cost of college has been a national issue in the U.S. for a century.

As John D. Rockefeller Jr. explained it in 1927, there was once a time when it made sense for society not to expect students to pay much for college: most of the students were going into the ministry, or into some other low-paying but society-benefiting career, so it behooved the nation to keep costs low by supplementing funds with endowments and gifts from men like Rockefeller himself. That had changed by the early 20th century, when more men (and a few women) were going to college, many of them in preparation for their future high-earning careers, or simply because it was becoming more normal. Why, the reasoning went, shouldn’t they pay more?

If they couldn’t afford it, Rockefeller suggested a system of student loans that sounds pretty nice today. “For those students who could not meet these higher costs scholarships and student aid would need to be used with increasing liberality, and student loan funds provided on a large scale,” he declared. “For most students other than those who go into the ministry or teaching, a loan either with or without interest, with the first payment date possibly ten years after graduation, would meet the situation and not prove an undue burden.” (His detractors cautioned, however, that such a system would make college the domain of the wealthy.)

Sure enough, in the years that followed, as the national economy tanked and colleges moved further away from the ministry-centric mission they had once espoused, many of the country’s best schools raised tuition.

In 1934, a freshman matriculating at Dartmouth would spend $1,050 on tuition, room and board, and “incidentals.” The expected real cost of a year at Dartmouth, after fraternity fees and other expected expenses were accounted, was $1,700—by TIME’s reporting, “highest in the land.” (That’s about $30,500 in today’s dollars.) That year the U.S. Office of Education surveyed the nation’s colleges about the cost of attendance and found that the average cost for one academic year was $630 ($11,300 today).

In 1944, when President Franklin Roosevelt signed the G.I. Bill of Rights, he guaranteed that qualifying veterans would receive a free year of college—meaning up to $500 a year. ($6,800 today.) In the years that followed World War II, philanthropic donations to American colleges were up, but so were costs. Tuitions had been raised “to the limit,” TIME noted, in places like the University of Pennsylvania, where students were charged $600 in 1950 (nearly $6,000 today). By 1960, with enrollment surging, even more money was needed, and a major tuition hike was forecast. That year, college costs surveyed by TIME included $2,015 for tuition, room and board, and fees for a year at Bates, and $1,450 for Lewis and Clark. (That’s $16,400 and $11,800 today.)

These days, the average cost for a year at a four-year college ranges from $9,410 for in-state public tuition to $32,410 for private. Neither of those figures include room and board. But, in general and at many specific places, costs are far higher: just looking at a few of the colleges surveyed by TIME over the years, Vassar these days costs $52,320 for a year’s tuition, and Bates is $64,500 for tuition, room and board and fees.

So the worry over rising tuition may be nothing new, but the scale of those worries is.

While politicians debate solutions, what are families to do in the meantime?

In 1969, TIME proposed one unorthodox solution: “How can parents cope with the rising cost of college? Answer: raise a boy like Thomas Lagos, who has just saved his family thousands of dollars by breezing through Ohio’s Wittenberg University in a single year.” 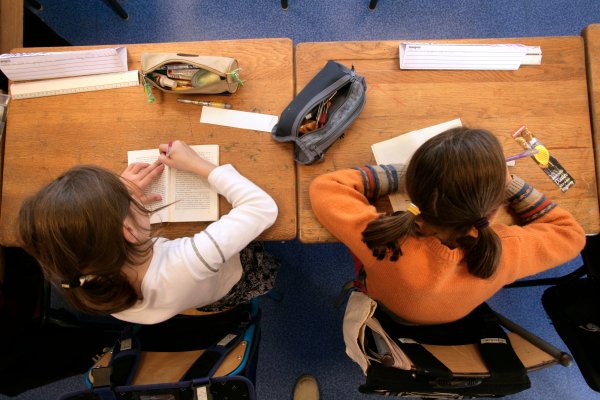 Is Homework Good for Kids? Here's What the Research Says
Next Up: Editor's Pick