Saul Loeb—AFP/Getty Images
Ideas
By Belinda Luscombe
Luscombe is an editor-at-large at TIME and the author of Marriageology: The Art and Science of Staying Together.

A guy with a history of inappropriate behavior with women, behaved with women in a skeevy way yet again.

His wife announced that she was leaving.

People began to blame the wife.

There are some persistent, vexing myths about marital infidelity that always surface when events like these befall some unfortunate power couple. This first of these is always, bizarrely, the belief that husbands cheat because their wives aren’t attractive. Nope. Exhibit A on this front was Beyoncé, whose Lemonade album seemed to suggest that her beauty and talent had not spared her this particular marital stressor. Exhibit B might as well be Abedin. And yet he went behind her back repeatedly—this time, according to the New York Post, sending a woman inappropriate suggestions and photos, in one of which his 4-year-old son is in the background. Clearly, it’s not about looks.

The second myth is that it’s not cheating if there’s no actual sex. Actually, it totally still is. Sure, humans will always be attracted to other good looking humans; that’s normal. Acting on it, that’s the part that’s a betrayal. The Weiner/Abedins have offered us a useful standard. If the exchanges one partner is having were made public, would it make the other partner feel like he or she were cat litter? If so, it’s a betrayal. What is marriage, if not at the very minimum a promise between two people that they can trust each other with the things—children, reputations—that they really care about?

There’s a third myth, which is a subset of the first and second, that cheating is inevitable. Mutual attraction may be inevitable, but this is not the same thing. So much of human interaction requires sophisticated cognitive skills: the ability to control our impulses, our understanding of cause and effect, the delaying of gratification. Monogamy is a higher order skill and requires those things in spades. Weiner, whether through illness, a lack of will, or too many after-dinner drinks, has shown an incomplete mastery of such skills.

Some studies have actually suggested that men are much more likely cheat when their wives make more money than they do. This may be because, researchers postulate, many men feel a need to reassert their traditional gender role by behaving in a highly traditional male way—chasing women—when they feel their masculinity is at threat. Similarly, Weiner, who may have seen his political star dimming as his wife’s blazed, could have felt the need to act out to reassert, even in his own mind, his status as a powerful male.

Another precondition for a lot of cheating is a long absence by one partner. This is an issue among military spouses, movie star spouses, rock star spouses and oil rig-worker spouses. Abedin is working monster hours as Hillary Clinton’s right-hand woman. She told a reporter recently that Weiner was “essentially, a full-time dad.” When she’s home, she has to find time to be a mom and a wife. But that’s not a license to act out, nor is Abedin in any way to blame for Weiner’s actions. There are plenty of men, for example, who put in equally brutal hours and yet their wives manage to keep it together.

Less scientific surveys have also shown that having young kids and access to technology make it more likely people will cheat, as amply demonstrated in this marriage. Most annoyingly, Weiner has proved that on this subject Dr. Phil is right: The best predictor of future behavior is relevant past behavior. 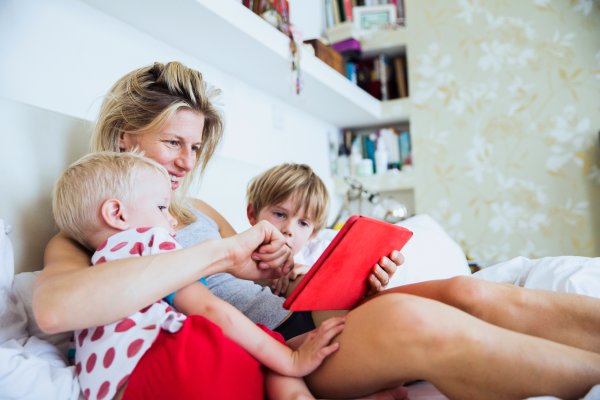 The Case for Giving Your Kids More Screen Time
Next Up: Editor's Pick