How Snapchat Is Challenging Professional Photography

Not too long ago, vertical imagery was the mockery of the online photo world. The criticism came from everywhere. For Outside’s Grayson Schaffer, people who posted vertical photos online were “like your grandfather who still dials his cellphone with his index finger instead of his thumb.” Even YouTube deemed vertical videos forbidden back in 2012. When it launched its recording app, Capture, the Google-owned site forced its users to tilt their phones horizontally before hitting the record button.

Today, it seems like the format has grown out of its ugly duckling phase. Vertical videos now play natively on YouTube and, according to a recent Knight Foundation report, 89 percent of U.S. mobile phone users (144 million people) access news and information on their phones. The overwhelming majority of these mobile users are holding these phones the way they were designed to be held: vertically.

This drastic shift from desktop and laptop computers, with their traditional landscape-type screens, to mobile phones is sparking a renewed demand for vertical photography across media organizations including at the New York Times, National Geographic and TIME.

The rapid shift to vertical is due, in no small part, to the growing popularity of apps like Snapchat and Instagram. Snapchat, with its 150 million users, reaches 41% of consumers aged 18 to 24 in the U.S., with users spending between 25 and 30 minutes within the app every single day. When opened, the Snapchat app offers users a full-screen, vertical camera, inviting them to shoot in that orientation. This user behavior is now spreading beyond the ephemeral communication app and its new challenger, Instagram Stories.

“It’s no secret that our audience is increasingly experiencing our journalism on mobile devices,” Jeff Furticella and Becky Lebowitz, two of the New York Times’ sports photo editors, said an email to TIME. “So in the past year or so we’ve made a point to focus on experimenting with new ways to reach them with the outstanding imagery our photographers produce.” That means photo-editing stories three times: for the print edition, for digital desktop edition and for the mobile version. “Those are all completely unique experiences, with some images being more effective in one medium versus another,” they said. “And on mobile, there’s no question that a vertical image makes the most of the format.” During the Rio Olympic Games, for example, a team of digital photo editors used staff photography and wire agencies to produce slideshows of vertical images designed specifically for the newspaper’s mobile.

At National Geographic, the demand for vertical photography is felt especially on social media, Sarah Leen, the publication’s director of photography said. “From Snapchat Discover to Instagram Stories to responsive web pages, we are increasingly thinking mobile first, which has given rise to this demand for more vertical imagery,” Leen said.

When National Geographic launched the NatGeo View mobile app in February 2015, it favored vertical imagery. And, though the app was shuttered earlier this year, its aesthetic philosophies were rolled out to the brand’s site, which, like the majority of content online, is increasingly accessed through a mobile device. “The demand for verticals could ultimately lead to a generation of photographers who will master the vertical frame with the same aesthetic intelligence as we see in horizontals and squares,” Leen said.

Some photographers do not like the move towards vertical imagery. “I don’t think cropping or awkwardly composing a vertical picture necessarily advances photojournalism,” said Belgian photographer Tomas van Houtryve. “In the age of smartphones, I’m hesitant to encourage photographers to bend to the constraints of app engineers at the cost of their own artistic vision.”

Ken Lyons, a senior photo editor at The Denver Post, also said that photographers shouldn’t conform to an app’s conventions. “The fact that Instagram eased up on the square-only format was because of demand, right? They could have really stayed with that but they discovered there was a huge demand by both photographers and audience to break out of that,” he tells TIME. “To me, it’s a clear example of not just following what the social apps force us to do, but actually having a strong influence over them.”

Others are ready to experiment more with the format. “I’m not sure when it happened but in the last couple of years I’ve actually started to really gravitate towards verticals and they’ve become a big part of my personal work,” says photographer Natalie Keyssar. “I still shoot both formats all the time but as a lot of my work increasingly uses diptychs, and I’ve been thinking a lot about mixing symbolism and emotion in photography with traditional pure storytelling images. To me, I guess, a vertical is a symbol, whereas a horizontal is a story.” 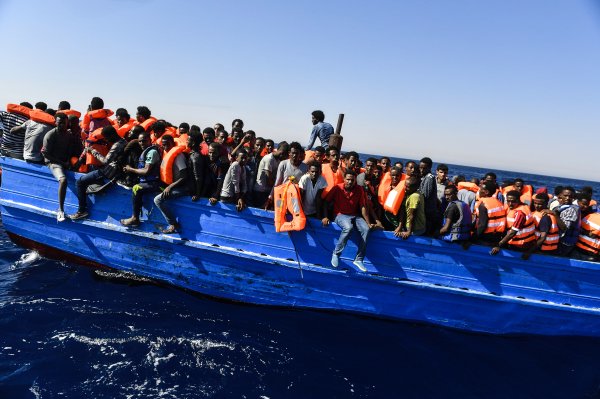 Migrants' Last Hope: A Rescue on the Mediterranean Sea
Next Up: Editor's Pick