To close out the 2016 MTV Video Music Awards, none other than Drake—the “Champagne Papi” himself—ascended the stage to bestow the Michael Jackson Video Vanguard Award upon Rihanna.

Drake, who was late to the awards show due to traffic, luckily made it in time for his big moment with the singer, who performed four different sets over the course of the evening including her career’s biggest hits. He told the story of meeting Rihanna back in 2005 when she was shooting a video for one of her first big songs, “Pon de Replay,” in his hometown of Toronto. Eleven years later, he said, she’s still the same—and has made her mark on the world of music, fashion and video.

“She succeeds by doing something that no one in this music industry does, which is being herself,” he said, adding: “She’s someone I’ve been in love with since I was 22 years old.” The crowd whooped at his open adoration, while Rihanna just smiled coyly.

For her part, Rihanna chose not to respond to Drake’s sentiments in her own speech, instead making a broader statement.

“My success—it started as my dream, but now my success is not my own. It’s my family’s, it’s my fans’, it’s my country’s, it’s the Caribbean’s as a whole, it’s women, it’s black women,” she said.

Britney may be back, but Beyoncé and Rihanna stole this show. 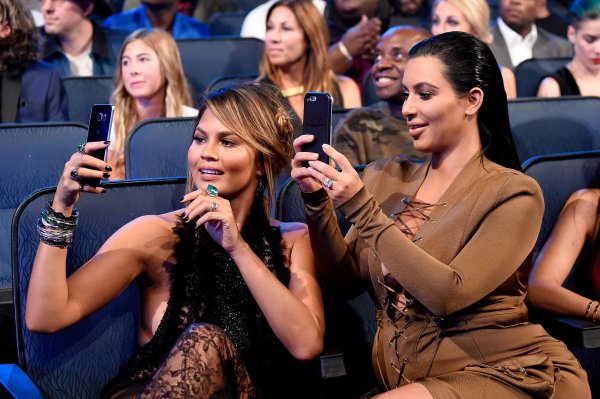 5 Things You Should Know About the 2016 MTV Video Music Awards Celebrity Seating Chart
Next Up: Editor's Pick