Beyoncé Aside, a Disastrous VMAs Reveals an MTV in Crisis

MTV’s creative side and viewers alike can join in praise for the singer, whose electric performance of several songs from her album Lemonade saved this year’s Video Music Awards broadcast. It may be just about the only thing they agree on.

Prior to Beyoncé’s appearance, deep into the broadcast, the show had been uncharacteristically muddled. Sure, the VMAs, MTV’s sassy answer to the Grammys, have long forged iconography out of an absolute refusal to set limits; that’s how we ended up with moments from Madonna’s “Like a Virgin” to Lady Gaga’s meat dress. But this year’s broadcast’s particular messiness seemed less like the raw material for potential greatness and more like a show put on by a network that has lost its touch both for spectacle and for simple appeal.

Just about every producing decision in the show seemed, simply, wrong. Rihanna, the recipient of the lifetime-achievement Video Vanguard Award, did not get the sustained 15 to 20 minutes recent recipients Justin Timberlake, Beyoncé and Kanye West got. (Timberlake and Beyoncé put together titanic tributes to their own legacies; West, last year, delivered a speech testifying to his own genius.) She got four performance slots scattered through the evening, with as much haphazardness as she herself sometimes seems to devote to her own career. But Rihanna’s lack of aggressive long-term planning is a sign of confidence, while MTV’s proved exactly the opposite.

After all, Rihanna’s airtime was reshuffled to make room for a limited Nick Jonas performance, a cute but uninspired Ariana Grande ditty, and endless interruptions from a comedy team whose shtick was pitched about as poorly as possible. Comedians Keegan-Michael Key and Jordan Peele were used more heavily than almost any awards-show host I’ve ever seen, though they were not actually the hosts. They mercilessly made fun of “social-media correspondents” by using language specifically pitched in a tone not of teens but of late-twentysomething media members. It likely flew over the heads of the intended audience (who likely did not watch Key & Peele, a show that ended in September 2015) while growing irksome to the social-media savvy portion of the audience they meant to mock — who, after all, want to see something great to tweet about, not just two guys relentlessly pretending to be the sort of guys you avoid on Twitter.

Key and Peele revealed a fundamental disconnect between what the show was attempting to sell and what its audience might, potentially, find appealing. Jimmy Fallon coming out at show’s end to deliver a weird soliloquy “in character” as Ryan Lochte was not something anyone asked for as the show moved toward the three-hour mark. Britney Spears, herself a VMA veteran, delivered a performance that was stripped of the sort of context that her weighted-with-history presence necessarily implies — it was mainly just promotion for the work of guest rapper G-Eazy. Her gig was hyped to high heaven as a “comeback” of sorts for an artist whose last performance at the show, in 2007, was a notorious disaster; it was both fine and not in any way worth the hype, a strangely underblown bit of stagecraft that undersold Spears’ magnetism and appeal to fans.

Read more: See All the Winners From the 2016 MTV Video Music Awards

It fit a show that was missing, in the main, was real star power. Nominees for the top award included Justin Bieber and Adele, both absent. Their fellow nominee, Kanye West, had been given four minutes of airtime to do whatever he wanted—he spoke at some length along similar lines to last year’s speech, then premiered a new video in which he did not appear, one that ended with its lead female seemingly transforming into a big cat.

With all respect to West’s right to speak his mind, this would seem to sum up the problem the VMAs are facing. It’s not dissimilar to the one glossy magazines face as their access for potential profiles has been cut from days with the stars to a quick lunch; social media provides a much less labor-intensive alternative for celebrities. West cannily knows he doesn’t need to bother performing at the VMAs to make a splash. Other stars just skip the whole thing. Unless you can get a 15-minute spot — or, at the very least, four four-minute ones — why bother showing up? Past VMAs were larded with star performances, while this one felt thin as soon as you got past Rih and Bey.

The VMAs don’t feel, quite, like a missed opportunity, for while it’s easy to note specific production foul-ups, I’m not sure what else the network could have done to put on a worthwhile spectacle — there’s only so much time to hand over, and Bieber and Adele will both get more positive attention from a tweet than they would from a performance on basic cable. The fact that MTV is equally unsure — that this is another year of diminishing returns for an awards show that used to boast a bulletproof roster — is proof positive that we’re at an inflection point for pop, one at which top-tier artists no longer need anything but the very best promotional opportunities. They can create the rest themselves. 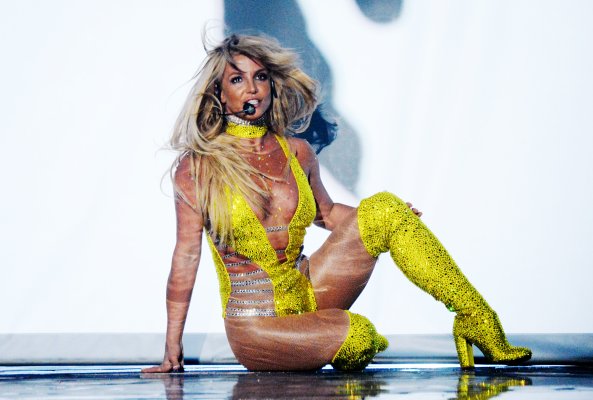 Watch Britney Spears Make a Comeback at the 2016 VMAs
Next Up: Editor's Pick