It was announced before Sunday night’s VMAs that Kanye West would have the floor for four minutes—and given the rapper’s willingness to court controversy, they were among the most anticipated minutes of the evening. When West took the floor Sunday night, he announced that he planned to debut a new music video—“but before I do that,” he said, “I’ma talk.”

West covered a lot of ground during the speech, ranging from the murder rate in Chicago to his idols in the business world to comments on a recent controversy with Taylor Swift (for a full explainer on their drama, see here). He opened on a light note, though, joking that even if his “Famous” video loses to Beyoncé in the Video of the Year category, he won’t be mad because he’s “always wishing for Beyoncé to win”—a reference to the moment, at the 2009 VMAs, when the Swift-West beef first began. He went on to address the latest events in their melodrama by saying that he’s a lover of all, and that’s why he called Swift to ask permission to include a controversial reference to her, which she later denied giving full permission to use, in “Famous.”

But West’s remarks took a serious turn from there, as he proceeded to recount an anecdote when a young black Chicagoan told him last year that three of his friends had been killed and wondered if he would be next. He quoted three ways in which people are kept in poverty—by taking away their esteem, their resources, and their role models—and objected to “older rich people, a.k.a. white,” telling him not to compare himself to creative and business icons like Henry Ford, Walt Disney and Steve Jobs.

Before introducing his new video for “Fade,” a steamy “Flashdance”-inspired workout featuring Teyana Taylor, he acknowledged one of his idols in the audience, Puff Daddy, as well as his wife and “thought leaders” like Jaden Smith and 2 Chainz. Then, returning to the light mood with which he opened his remarks, he concluded: “Tonight, we’re here to have fun.” 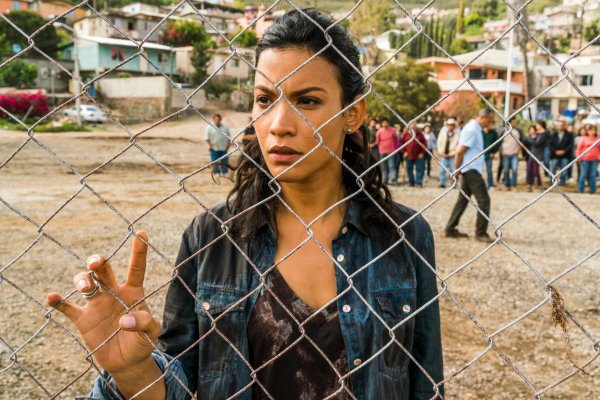 Fear the Walking Dead Delivers a Shocking Twist in 'Los Muertos'
Next Up: Editor's Pick