David Harbour plays Stranger Things’ leading man, Chief Jim Hopper, a sheriff so destroyed by his daughter’s death that he hates the cutest kids in 1980s Hawkins, Ind., for having a pulse when she doesn’t. Still, he becomes determined to rescue Joyce’s missing son or die trying.

Now that the show has ruled pop culture this summer, he doesn’t feel like he has to say yes to a project he doesn’t believe in anymore. “There’s a big shift. Honestly, one of the most gratifying things is I can start to pick and choose and turn things down that last year, I would have killed to get,” he says. But it’s more than a smart career move for the veteran actor. His triumph as a phony-punching antihero in a six-day transitional period made him rethink his life. “Hopper makes me want to be a better man,” he says.

In conversation with TIME, Harbour discussed why he’s felt like a Hopper-style outcast, how commercialization screws with storytelling and he even coughs up details about the just-confirmed second season.

TIME: When a show like Stranger Things strikes a chord, what does that say about what’s missing from culture?
It had magic and it had soul. This is a generalization, but the magic of the movies is lost with commercialism and the money and the cool factor. I feel like this really captured this childlike heart-opening wonder of what it is to experience a story in a cinematic way.

The series really hooked people at a time when the tragic loss of sons seemed to be in the news constantly. Is there something telling about the show moving people this summer in particular?
When it was coming out when there were so many shootings, I was worried it would sound trite to talk about a television show in the midst of it. With this, I do feel there’s a pure voice, and it’s a beautiful story of hope and redemption and people living simply doing heroic things. That pure entertainment value will take your mind off of it and can open people up to empathy, which is a good thing to have in the world right now.

The Department of Energy wrote a sarcastic, defensive blog post about how the supernatural things on your show are inaccurate and that they’re all great people improving the world.
It was amazing! They’re liars. I know they deal with monsters every day. I loved that thing—it was hilarious. It looks like they’re kind of mad. I’m coming for them season 2.

Hopper’s such a tough guy. Do you think our perception of masculinity is limited in pop culture right now?
We’ve become narcissistic and we think that what defines us are our bodies, like a man has to have a six-pack and big muscles to be masculine. We’ve lost touch with what makes a woman a woman, a man a man. People are saying, ‘Enough with unattainable superheroes—let’s have the broken ordinary people onscreen so that we can feel the storytelling.’ I had to battle my own masculine narcissism. I thought, ‘Maybe I’ll get in really good shape,’ but that does a disservice to the guy and the audience. The way I crafted Hopper is like the men of that era—when there was something about being a man that meant you don’t cry. You get s–t done.

People have responded to the fact that he’s a man of action. Any doubts about whether or not the character would resonate?
Yes, we crafted him as a mess. We were like, ‘Let’s make this a real f–king broken dude who’s popping pills and drinking and doesn’t take care of himself.’ And halfway through the shoot, both the hair girl and I were like, ‘I don’t know if this is working. This is supposed to be the leading man. I think we might have gone too far. I think this might be a problem for people. They might be like, f–k this guy.’ And then I saw it cut together at the premiere, and I was blown away.

You’ve played some other morally ambiguous cops. With police brutality on the public’s mind, what’s your stance on the way TV and movies characterize cops?
I think the system in general is flawed. It’s systemic failure. I did some training for End of Watch, and we got Tasered like everybody in the police academy does, and I developed a lot of sympathy for what police go through. But the actual training itself was flawed. I think there has to be a real look at the fact that they speed these guys through training and put them out into society. I would really love to see the training for cops go up, and to see people financially incentivized to become cops—to take a job that is valued with money behind it.

You portray a man who feels alone. What happened in your personal life that you drew on for the role?
I always felt like a man who’s had to fight for things. In the community I grew up in, people were successful, getting out of college and owning property, and I was doing plays where I wasn’t making any money. Everybody felt sorry for me, but I believe in the power of theater, and I don’t think you need to be in a blockbuster to touch people. So I had to endure people judging me the way people judge Hopper as a drunk and an outcast—to show them that I had something inside of me that was beautiful even though, on the outside, it doesn’t look so pretty. For a while, I didn’t have success, money, or fame, or family. But I had something to say, and I think Hopper has that same journey. He lives like a child, and yet he’s a beautiful heroic person who wants justice and fairness, and I very much relate.

Hopper lies to people about how his daughter’s alive. Why is that?
That was one of the things that fascinated me about the pilot. There’s a ‘F–k you’ to the lies. He knows O’Bannon has lied to him, so he says, ‘You know what? I’m going to f–k with you.’ It’s an interesting character trait that felt right emotionally.

You get the sense that Hopper doesn’t become obsessed with saving the day because he sees himself in Joyce—he’s just done being screwed with.
Exactly. Initially as with any great hero story, he resists the call, but then once he finds his own particular brand, which is not Joyce’s hysteria, it’s that he doesn’t like being lied to, that’s what launches him into ‘Just tell me the f–king truth,’ and that’s when he starts punching people. There’s this ferocity because maybe if I can save this kid, I can have some sort of redemption. What’s really interesting to me is that he does get redemption in terms of Will, but he has to give up Eleven at the end. It’s a choice that he has to make. Otherwise he’s trapped, but with the Eggo’s at the end: Maybe he has to find redemption with Eleven if she still exists somewhere in the universe, and he clearly believes she does. He wouldn’t leave the waffles if he didn’t.

But is it conceivable that the way he clings to his daughter’s memory, he’s just carrying a torch for Eleven and she’s really just gone?
Yes—although, he has been there and back in the nether, and he does understand this government organization. It is a month later, he has some kind of insider information, and if it has been a month and he’s been going back and forth, and the food’s not there anymore, either there’s a really crafty squirrel or maybe Eleven’s alive.

In one scene, Hopper says, “Did you ever feel cursed?” How could that line explain where the story goes from here?
There is some backstory we may get into, which would be interesting—about his daughter dying of cancer, and his guilt about it. There may be something about him that is literally toxic, and he feels that he infects things, which is interesting in terms of Eleven, and her being the monster. There is something with Hopper and his presence f–king things up and more complexities to where that cancer comes from, which we’re going to get into in season 2. 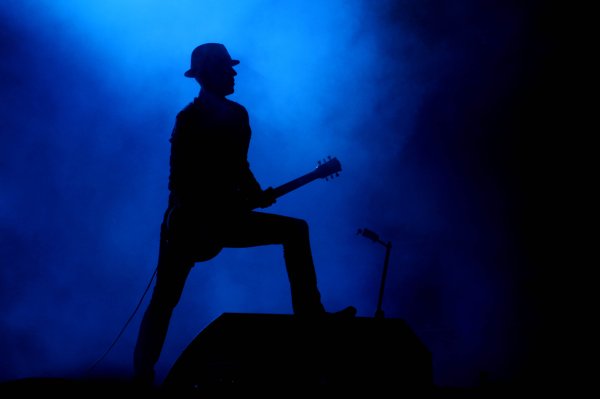