Donald Trump sparked outrage on Saturday when he used the shooting death of basketball star Dwyane Wade’s cousin as a reason black voters will support his presidential campaign.

Nykea Aldridge, a 32-year-old mother of four, was fatally shot in Chicago on Friday afternoon while pushing her baby in a stroller and walking to register her children for school.

“Dwayne Wade’s cousin was just shot and killed walking her baby in Chicago. Just what I have been saying. African-Americans will VOTE TRUMP!” Trump wrote on Twitter on Saturday morning, spelling Wade’s name incorrectly. Trump then deleted the original tweet and posted a new version, changing only the spelling Wade’s name.

He later added his condolences in a third tweet.

“My condolences to Dwyane Wade and his family, on the loss of Nykea Aldridge. They are in my thoughts and prayers,” he posted.

Trump has made attempts to appeal to black voters in recent weeks, while polls have shown his support among black voters to be dramatically low.

“You’re living in poverty. Your schools are no good. You have no jobs. Fifty-eight percent of your youth is unemployed. What the hell do you have to lose?” Trump said during a speech in Michigan earlier this month. 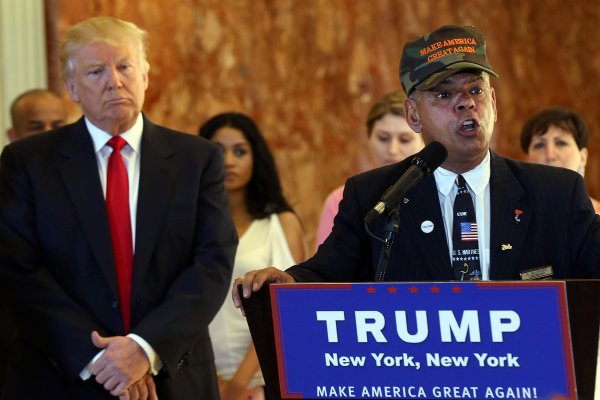 Donald Trump Adviser Regrets the Way He Said Hillary Clinton Should Be ‘Shot for Treason’
Next Up: Editor's Pick