Syria's Children Are the World's Responsibility

Five-year-old Syrian boy Omran Daqneesh sits in the back of the ambulance after he was injured during an airstrike in Aleppo, Syria, on Aug. 17, 2016.
Mahmud Rslan—Anadolu Agency/Getty Images
Ideas
By Scott Arbeiter

Arbeiter is the president of World Relief.

Five-year-old Omran Daqneesh sat quietly inside a brightly lit ambulance. Grey soot covered him from head to toe. The left side of his face was caked in blood. His left eye drooped, almost shut by swelling. He looked around dazed, felt the side of his face and, noticing the blood, tried to wipe it on the chair. Last week, Omran’s house was hit by an airstrike. He was pulled out of the wreckage by aid workers and brought to a medical station. The nurse who attended Omran’s injuries said he didn’t come out of shock until he saw his parents, who survived, arrive at the hospital. That’s when he cried. His ten-year-old brother Ali died of his injuries.

We’ve seen the news and forgotten, heard the stories and moved on. Perhaps, it’s worth remembering what exactly led to our global refugee crisis, the worst since World War II.

It started in early 2011, when government forces in Daraa arrested and tortured a group of teenagers for scribbling revolutionary slogans. Protests erupted, and security forces, in a flash of insanity, opened fire, killing several. Unrest grew in Syria as thousands took to the streets. An opposition group formed. A civil war was born.

As the war wore on, the crimes against humanity began to surface. Our minds could not comprehend what kind of thinking justified dropping explosive barrels and chemical weapons in civilian-occupied areas, then destroying the hospitals treating the wounded. Our hearts could not grasp, either, what kind of evil fueled a new-coming insurgent group, called ISIS, to behead, stone and burn alive thousands of Syrian men, women, and children.

Then, when we thought it couldn’t get worse, the tide of the refugee crisis flooded the world: More than 4.8 million Syrians—close to half of them children—were displaced from their ancestral homes, forced to dwell in overcrowded and inadequate refugee camps or to brave the elements to find refuge. And while accounts of many languishing in camps and drowning at sea emerged, the shelling in Aleppo and half a dozen other Syrian cities continued to rain down.

Five years later, more than 470,000 lives have been lost. When it seemed like there could be nothing more that could surprise us, then we met 3-year-old Alan Kurdi and 5-year-old Omran Daqneesh.

Had he not been lying on the sands of a Turkish beach, you would have thought Alan was sleeping. His head resting on his right cheek, his arm next to his belly, his left knee bent as if trying to find a comfortable position: the whole scene seemed eerily peaceful. Alan drowned last year as he, his brother and parents tried to cross to Greece in a 15-foot rubber raft. Only Alan’s father survived.

The image of Alan went viral last year, and Omran’s last week, making a crisis we had forgotten—once again—a worldwide trending subject. These two boys—when we have years’ worth of evidence of human rights violations, studies revealing the graphic details of torture, reports of newborns suffocating because an airstrike cut their oxygen supply and numerous accounts of children wounded by shrapnel and buried alive—managed to jolt the world awake when nothing else would.

Alan and Omran pierce our hearts because they strip a faraway conflict of its remoteness and anonymity. Suddenly, we are not looking at a body 5,000 miles away or a number or statistic; we are looking at a real child, who could be our own, sitting on an orange chair, too stunned to panic or cry, or lying face-down on a beach, so delicately that death is confused for sleep. Their pictures sum up the unsayable horrors of this conflict in a way facts or statistics cannot. Seeing them is seeing the whole history of this war—the desperation of a father, the heartbreak of a family—and as humans, we can’t look away any longer.

Every day, more families, like Alan’s, attempt to cross borders, braving deserts and seas, or, like Omran’s, suddenly find themselves buried under the rubble of what used to be their home. The situation in besieged cities like Aleppo, where children make over 35 percent of the casualties, continues to worsen as food supplies dwindle.

A Syrian-American doctor who has been traveling to Aleppo, recently wrote, “Every time I work there I treat children often so terribly wounded and traumatized that I wonder if the ones who survived were unluckier than the ones who died.”

The images of Alan and Omran pull us back in. They capture singular moments of the effects of the war but they are not unique—hundreds of thousands of children have suffered and continue to die as a result of the conflict.

The United States and other nations must act urgently to stop the suffering. Our elected officials must continue to press for a peace process in Syria while also ensuring the global humanitarian appeals are fully funded. Countries also have a significant opportunity this September to make pledges at President Obama’s Refugee Summit on September 20 to allow more refugees access to education and the right to work.

We can no longer wait and waver. Too many more will die. These children are our responsibility. 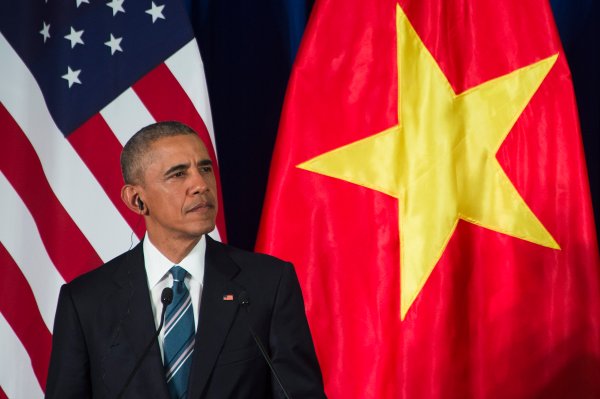 Why the Next President Must Focus on Asia
Next Up: Editor's Pick