On The Late Show with Stephen Colbert Thursday night, the host asked Kaine if he was aware of the dad jokes made after his Democratic convention appearance. “Tim Kaine is making earnest dads everywhere proud,” Colbert read off a tweet. “Tim Kaine will be driving you TO and FROM the prom, mister,” said another.

Kaine responded exactly as America’s good-natured stepdad would. “I’ve been prepared for that for 26 years, because I have three children who have been ripping on me and saying those things about me since they were born,” the vice presidential candidate said.

(This wasn’t the first time Colbert’s show referenced Kaine’s fatherly qualities: Last Week Tonight host John Oliver appeared with Colbert at the end of July and said of Kaine, “The level of dad jokes and impressions that came out of that man’s soft face. He is a tall glass of Lactaid.”)

Kaine also told Colbert that he knew Hillary Clinton had picked him as her running mate just 12 minutes before the rest of the country found out. “I had to race, called my wife, called our kids, called my parents,” Kaine said of what he did as soon as he found out. 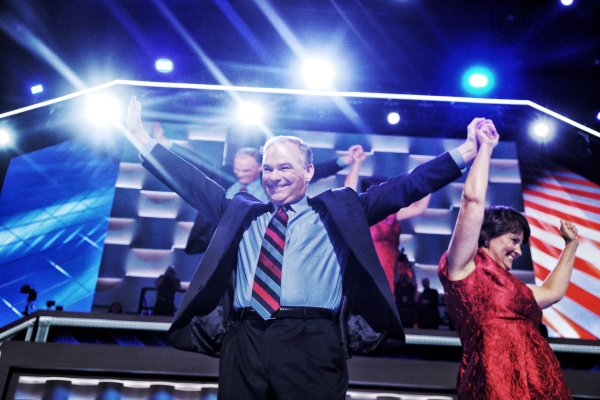 How Kaine Undercut Trump at the Democratic Convention
Next Up: Editor's Pick