10 Things to See and to Do at Visa Pour l'Image

To say that the Visa pour l’image, which has brought together photojournalists from around the globe in the French-Catalan town of Perpignan for the last 28 years, is overwhelming for newcomers would be an understatement. Ask any one what their first visit was like, and they’ll launch into a tale of how they came in knowing no one, but ended up making lasting friendships. Such was my experience. I had just graduated from photo school, a blissful cocoon where everyone had your back, and found myself way out of my depth. I put the portfolio I had brought back in my suitcase, and tried to simply enjoy what the festival had to offer: the exhibitions, the screenings and the opportunity to meet fascinating people. Truth be told, it was a lot less daunting when I had no agenda. And, by the next year, I was the one doing portfolio reviews, admiring the courage of all those who put themselves and their work out there. Visa pour l’Image is very much what you make of it; and here are a few ideas to get you started.

1. Make time to see the exhibitions and the screenings

Jean-François Leroy and his team combed through over 4,500 submissions and singled out 20 photo essays to exhibit, and several dozens for the evening screenings. Given the caliber of the chosen works, it’d be a shame to wake up Sunday morning and realize that you’ve only seen half of them. To avoid a mad last-minute dash through Perpignan, Adrienne Surprenant, whose report on the consequences of the Nicaragua canal was part of last year’s program, recommends getting there early − especially since, its not unusual to see long lines outside the different venues on the weekend when the locals come out to appreciate the photos. “For my first time at Visa, in 2015, I was lucky enough to have been selected for an exhibition,” she says. “Still, I had no idea of what it would be like. Given how many people attend, I thought it best to get there early in order to have time to see everything. And, you also get a chance to know people before it gets too crowded.” Her colleague Frédéric Noy, whose work on the LGBTI community in East Africa is exhibited this year at the Couvent des Minimes, highly suggests seeing only a few per day. “Otherwise you grow tired and you’re not in a position to appreciate the photos as much. And, give yourself the time towards the end of the week to go back to those you’ve preferred,” he says.

Speaking of meeting people, Café de la Poste, in the shadow of the Castillet, a 14th century fort and former prison, is the uncontested gathering spot. “It’s overwhelming at first,” says Sara Lewkowicz, who had her series Shane and Maggie, an intimate look at domestic violence, exhibited in 2013. “So find a friend and stick with them. As you become more comfortable, you’ll branch out on your own more.” More than a place to try and wow photo editors − they too need a break from time to time − it’s one to dream up far-fetched ideas and find ways to make them a reality. Several collectives, agencies and projects were born out of a discussion around a plastic patio table (Noor, MeMo Mag, VII Photo − who’s turning 15 this year – are just a few). So turn around to the person next to you, start a conversation, figure out how to actually harness the potential of Instagram Stories (Lynsey Addario’s takeover for TIME is a good place to start), imagine building a retreat space for photographers to unwind after a difficult assignment, or come up with the next groundbreaking project. “It’s all about being open to being moved by the stories that are shown and serendipitous encounters,” believes Catalina Martin-Chico, whose journey alongside the nomadic tribes of Iran can be seen this year at the Église des Dominicains.

3. Learn from the success of others

Once you’ve hatched the next great big plan, take the time to look at how those who came before you achieved their goals. Both Noor and #Dysturb will be present at the festival, showcasing their work and processes. The first will have a stand on the 2nd floor of the Palais des Congrès where photographers can drop in to look at a selection of images curated by co-founder Stanley Greene and, everyday between 3 and 4pm, they will host a Facebook Live with a member of the collective − as well as with surprise guests. The latter, #Dysturb, will once again take to the streets, this time posting a best-of of their past campaigns, highlighting where they’ve been active and presenting their upcoming projects.

Formal and informal portfolio reviews are plentiful, but can be hard to navigate. Many photo editors of major publications book sessions during the weeks leading up to the festival, but will leave a little room for unscheduled meetings, most often on the 7th floor of the Palais des Congrès. If you see one there, find out from other photographers waiting to show their work what the line-up situation is like. Some editors will hand out numbers, others will make you wait in line. In any case, be courteous and patient. “If you’re there to get work, understand that there are a lot of others who’ve been around a long time with great work trying to do the same. Doesn’t mean don’t try, but also don’t be surprised if picture editors don’t give you a lot of time. And, speaking from experience, try to build your resilience – every ‘no’ is one step closer to a ‘yes’,” advises Robin Hammond. His work on mental health in African countries in crisis, Condemned, was exhibited in 2012. A good place to start is with the Association Nationale des Iconographes, but book your slot early, and you’ll automatically br entered for the Prix Ani-PixPalace.

More than a diet of croissants, cheese and wine, it’s a visit to the Librairie Éphémère that is sure to make you pack a few more pounds. Headed by Corinne Duchemin, who has an encyclopedic knowledge of photography, the temporary bookstore stocks new and hard to find titles. “I try to buy books by photographers who will be doing signings. They give out the list when you register; so you can plan your purchases that way. And of course if you buy the Camille Lepage VISA publication – 100% [of the proceeds] go to the award created in her name,” recommends Gina Martin, from National Geographic Creative, an inveterate photobook collector. Signings with the likes of Paula Bronstein, Peter Dench, Per-Anders Pettersson, Guillaume Herbaut are already planned for next Friday and Saturday.

6. Keep your eyes peeled for the latest magazines

Given the importance of the festival, and the sheer numbers of photographers gathered in one space, many publications dedicated to photography like to release an issue just ahead of the festival, or even at the festival. Most are available at the aforementioned pop-up bookstore, but some like to surprise. Off the Wall, created by Anna-Alix Koffi, is releasing a special edition called the Visa Papers, edited by Clément Saccomani, the director of Noor, which asked many renowned photographers: “Why the hell are we doing this?” Pick up your free copy and read the answers of the likes of Stanley Greene, Alice Gabriner, Newsha Tavakolian, Shahidul Alam, Maria Turkenchova and many others. Also don’t miss, the release of the latest issue of the French bi-annual photo compendium, 6mois. The 300-pages magazine will set you back 25 euros, but will keep you busy for, as the name suggests, six months.

Since its creation following the Second World War, Magnum Photos has built an extensive and disquieting archive of images of refugees, exiles, displaced people and asylum seekers. Last year, as the number of migrants attempting to enter Europe reached incommensurable proportions and the European authorities flip-flopped on their policies, the agency launched Continental Drift, a series of reportage on current mass human migration. Moises Saman covered the Mediterranean route, Mark Power photographed the Zaatari and Azraq camps in Jordan, housing more than 100,000 people, Lorenzo Meloni studied the smuggler economy in Libya, Matt Black looked at the foreign aid industry in South Sudan, and so on. Presented in partnership with Canon, the exhibition, Exile, which looks at decades of mass migration, is on at the Palais des Congrès all week.

Concurrently, Visa pour l’image is featuring the work of two wire photographers, Aris Messinis of Agence France-Presse and Yannis Behrakis of Reuters on the incessant arrivals in their home, Greece, as well as Marie Dorigny’s focus on Syrian, Afghan and Iraqi women in exile.

A Syrian with his two children struggling to disembark after crossing from Turkey. Island of Lesbos, Sept. 24, 2015.
Yannis Behrakis—Reuters

8. …and reflect on its causes and ramifications

Paris Match and Elle magazine are each respectively organizing a panel to tackle some of the issues associated with the current refugee influx that ought to get you thinking about the roles and responsibilities of photojournalists, reporters and the media. The first, taking place Friday, September 2 between 2.30 and 4.30pm at the Palais des Congrès, is dedicated to the coverage of the Islamic State; while the latter, immediately following, is concerned with the specific plight of women refugees.

9. Figure out what Google has in store for journalists

In a similar vein, Visa pour l’Image, is, for the first time, partnering with the tech giant Google, who launched the News Lab with a mandate to reach out to news organizations. Together, they’ll be hosting a panel discussion on how technology impacts the way crises are covered. Photographers Aris Messinis, Andrew Quilty and Pierre Terdjman will join David Dieudonné, the News Lab Lead for Google France on Thursday, September 1st at noon at the Palais des Congrès. A good opportunity to hear what Google has to offer, what others wish it did and, hopefully, add your two-cents.

10. Make plans to come back

Though you might not get the big assignment you always dreamed of while at Visa pour l’Image, especially on your first try, Frédéric Noy advises not to despair: “Your first time at Visa is like a teenager’s kiss: exciting and disappointing at once, nerve-racking and promising, years-in-the-making and clumsy. A moment you’ll never forget and eventually look back on fondly.” 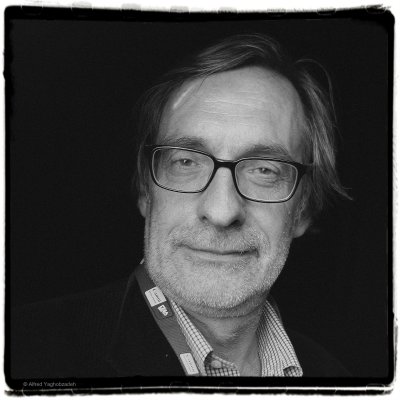 Visa pour l'Image's Director: I'm Not Against New Technologies.
Next Up: Editor's Pick