These 5 Facts Show Things in the U.S. Aren't as Bad as They Seem

The United States is doomed. Americans have never been at greater risk of terrorist attack. Illegal immigrants are flowing north across the southern border to wreak havoc and steal our jobs. Violent crime, especially in our cities, is out of control. The economy is still limping along, eight years after the onset of financial crisis. The military is a shadow of its former self.

These five facts take a closer look at the state of the nation at a time of (often ridiculous) politically motivated hyperbole.

1. Americans have never faced such a terrorist threat

Killers either claimed by or who claim allegiance to ISIS have certainly added to the death toll from gun violence in the U.S. Fourteen people were murdered in San Bernardino, California last fall, and 49 more died during the assault on the Pulse nightclub in Orlando, Florida. Those 63 murders are 63 too many. But if you’re a U.S. citizen on U.S. soil, you’re as likely to be killed by a lightning strike than a terrorist attack. With the horrible exceptions of the 1995 Oklahoma City bombing, carried out by domestic terrorists, and the attacks of September 11, 2001, there haven’t been more than 50 terrorist deaths in any year since 1970. What about American tourists in Europe? Even after the recent terror attacks in Paris, Nice, Brussels and elsewhere, terrorist attacks killed more Europeans in the 1970s and 80s than they do today. Defense against terrorism demands constant vigilance. Fighting ISIS requires both military action and state-of-the-art law enforcement. But voters aren’t well served when the threat is exaggerated beyond reason.

2. Illegal immigration is out of control

There are an estimated 11 million undocumented people living in the United States. That’s a serious problem no matter what sort of solution you favor. But claims that migrants are illegally entering this country in droves are sharply exaggerated. First, according to Politifact, “the best-available metric [of illegal immigration rates], Border Patrol apprehensions, reached a 44-year national low in 2015.” Another Politifact study, in 2015, reported that “the total number of illegal immigrants has essentially held constant in recent years, because the number arriving has roughly balanced the number going home or getting legal status,” according to Steven Camarota, research director at the Center for Immigration Studies. In addition, according to the Pew Research Center, “More Mexican immigrants have returned to Mexico from the U.S. than have migrated [into the U.S.] since the end of the Great Recession.” Illegal immigration and the presence of so many undocumented people in the United States is a serious problem, but the evidence suggests at least the problem has stabilized in recent years.

3. Violent crime is off the charts

Murder rates in Chicago and other cities, a number of mass shootings, and an increased number of deadly confrontations between citizens and police, have created the impression, fed by some politicians, that the United States faces a cresting wave of violent crime and gun violence. Here too the problems are real. But statistics on broader trends in U.S. violent crime might surprise you. According to recent FBI data, the rate of violent crime is down 49 percent from levels 25 years ago, and rates of murder and manslaughter peaked in 1980. Democrats warn that the number of guns has made life in the U.S. much more dangerous. Republicans claim it’s increasingly unsafe to walk the streets of American cities. U.S. elected officials can’t afford to become complacent about gun violence or other forms of violent crime, but neither view is supported by the evidence.

The U.S. economy added 255,000 jobs in July, according to official statistics, and U.S. companies have created about 15 million jobs since February 2010. In fact, the economy has added jobs for 70 consecutive months. That’s the longest streak since the U.S. Labor Department began reporting these numbers in 1939. The unemployment rate has fallen from 10 percent during the Great Recession to just 4.9 percent today. Wages are up 2.6 percent over the past year. The strength of the U.S. recovery is even more striking when compared with Europe and Japan. The U.S. economy is now 10 percent larger than at its pre-recession high point, according to a report published by the OECD in June, while the Eurozone has grown by less than 1%, and Japan’s economic growth has been nearly flat over the same period. Go-go growth is not on the horizon, and the U.S. economy face many challenges ahead. But by developed world, and recent US, standards, steady progress continues.

It’s pretty clear that U.S. influence in the world isn’t what it used to be. But that has more to do with both rising powers with new capabilities and public fatigue in the U.S. with costly wars than with any decline in raw military power. By that metric, the U.S. far outstrips any competitor. According to the International Institute for Strategic Studies, the U.S. will spend more on its basic military budget in 2016 than the next ten biggest military spenders combined. In addition, to be “where it matters when it matters,” the U.S. Navy makes use of 11 “carrier strike groups,” which consist of an aircraft carrier, a squadron of destroyers, a cruiser, dozens of air craft, thousands of personnel, and sometimes submarines. The Russians have a single aircraft carrier, which travels with a tug boat in case it breaks down. China originally purchased its sole aircraft carrier, built in the Soviet Union, for service as a floating hotel and casino. But military strength increasingly depends on 21st century tools. In 2010, U.S. Cyber Command was created to combine the cyber capabilities of the Army, Air Force, Navy and Marines. It’s unknown exactly how much money and talent has been devoted to this capacity, but it’s reasonable to assume that the military that invented the Internet has a solid head start on cyber competitors in China, Russia and elsewhere, whatever we read in the press about the latest hack. 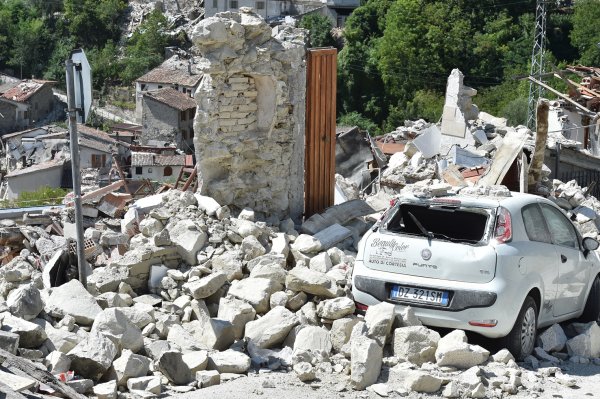 How to Help Victims of the Earthquake in Italy
Next Up: Editor's Pick