Horror is pretty much the last refuge of filmmakers who want to practice old-time movie artistry in the style of Brian De Palma or David Cronenberg—in other words, using the camera to tell much of the story—while also reaching a wide, mainstream audience. Superhero blockbusters reach millions of moviegoers, but they’re all about pileups of can-you-top-this plot points, ever more elaborate special effects and, perhaps most crucially, preserving the purity of mythologies that fans already feel passionate about. But horror movies, free of all that weight, can still be about visual storytelling. Earlier this summer, Jaume Collet-Serra gave us The Shallows, in which surfer Blake Lively outwits a wily, bloodthirsty shark that’s taken to trolling a surfers’ paradise. Lively is wonderful, both subtle and hair-tossingly fearless, as she almost always is. But The Shallows really succeeds on the strength of its camerawork. Collet-Serra and cinematographer Flavio Martinez Labiano break down the essential components of their story—shark and girl, sky and water—and weave them into something both crisp and lyrical. You could teach this movie in film school, not just because it’s artfully made, but because it also made money: It cost $17 million to produce and recouped approximately that amount in its opening weekend—then kept on chugging.

Uruguayan director Fede Alvarez’s Don’t Breathe isn’t as blissfully simple and effective as The Shallows, though it’s a different sort of horror movie, anyway: It fits squarely into the “trespassing kids in a creepy house” genre, and features many of that genre’s key elements (including, briefly, the now seemingly obligatory secret-grim-room scenario). But like The Shallows, it works on a few different levels: You could treat it as a casual primer on suspense-film craft, or you can just watch through splayed fingers, like the women who sat next to me at the screening I attended. She and her friend kept up a running patter along the lines of “No! Don’t go in there!” and “Run, bitch, run!” while periodically clutching each other like the Gish sisters in Orphans of the Storm. After it was over, she announced cheerfully, “I’ve gotta see that again!”

The concept is simple but ingenious: A trio of Detroit teenagers, including the supremely sympathetic Rocky (Jane Levy), habitually break into houses by gaming their security systems. In an early, Bling Ring-tinged sequence, Rocky longingly samples the wares of some rich lady’s closet. But all she really wants is enough money to get herself and her kid sister (Emma Bercovici), a little girl with dark, middle-aged hollows beneath her eyes, far away from their mean, negligent mom. California is the goal.

Rocky’s very bad boyfriend, the not-inappropriately named Money (Daniel Zovatto, seen in the 2014 art-house horror hit It Follows), hatches a scheme to break into the decrepit house of an Iraq War vet who reportedly has thousands of dollars stashed away. Rocky wants that money badly, for the aforementioned good reason. Sweet-natured Alex (Dylan Minnette), who harbors a not-so-secret crush on Rocky, signs on too. As they’re planning their siege, they learn that their intended victim (played by Stephen Lang, who played Colonel Miles Quaritch in Avatar) is blind. They’ve been handed the proverbial piece of cake.

What they don’t yet know is that Lang’s character, known only as the Blind Man, is a sinewy, vigorous man-demon who, though sightless, manages to see all: In one night-vision sequence, where the visual are rendered in a dusty, pale gray-green, his eyes look like desiccated white raisins, lifeless in their sockets. The Blind Man has a secret locked deep inside his house, whose ins and outs and nooks and crannies are etched in his brain. The kids, of course, don’t have that advantage, and in a smart, seamless sequence—it’s technically not a proper tracking shot, as there’s evidence of digital stitching—we follow as they explore the house, creeping along through hallways and doorways, upstairs and down, via the sweeping camera’s eye view.

Alvarez, who directed the 2013 Evil Dead remake, and his cinematographer, Pedro Luque, have clearly thought hard about what to show clearly and what images to mute: Sometimes we don’t know exactly what we’re looking at, and we end up peering at the screen as if we too had raisins for eyes. Other times, there’s marvelous clarity, and Alvarez’s attention to details enhances the tension: This is a house haunted by mold and dust, with lumpy mattresses and windows that have been hastily boarded up. In one of the film’s most weirdly wonderful moments, the Blind Man sniffs at the shoes the trespassers doffed at the door upon entry. They knew they could be betrayed by the sound of their footsteps, but didn’t stop to think about the smell of their feet. Lang makes a fine, creepy, get-off-my-lawn villain, outwitting this smart-alecky trio of youngsters at almost every turn. He may be sightless, but still, the eyes have it. 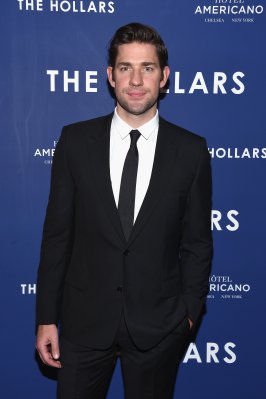 John Krasinski on The Hollars and Making a Movie With Wife Emily Blunt
Next Up: Editor's Pick