The Night Omran Was Saved

Dramatic pictures and video footage from Syria of ash-covered children and rescue workers removing bodies from rubble are now commonplace. Especially in Aleppo, the northern city divided for years by government and opposition forces. The eastern section, where civilians live in dire conditions, has been shredded by barrel bombs and airstrikes. One of those photographs recently grabbed the world’s attention. It was taken Aug. 17, following an airstrike by Syrian or Russian aircraft in the Qaterji neighborhood of the opposition-held section. Omran Daqneesh, silent and in shock in the back of an ambulance, became the face of Aleppo overnight.

Medical workers in Aleppo, the photographer and videographer who documented the scenes and a surgeon who has taught nurses and doctors at local hospitals have stitched together details from that harrowing night.

Dr. Mohammad, using a pseudonym due to security concerns, has been a surgeon in Aleppo for 12 years. He was at the hospital codenamed M10 when Omran arrived. The hospital, which he helped found in 2012, is supported by the Syrian American Medical Society.

Mohamad Abo Rajab, using a nickname for safety reasons, is a nurse at M10 who helped treat Omran on the night of the airstrike.

Mahmoud Rslan, a 27-year-old photographer from Aleppo, took the picture of Omran at the scene. He managed a pastry shop before the revolution and, beginning in 2011, participated in the protests.

Mustafa al-Sarout, a 23-year-old cameraman from Aleppo, videotaped Omran’s rescue. Before the revolution he was a tailor. In 2015, he started to work with the Aleppo Media Center, a network of citizen journalists and anti-government activists.

A general view shows the site of the Aug. 17 airstrike where five-year-old Omran Daqneesh and his family were injured in the rebel-held Qaterji neighborhood of Aleppo, Syria, on Aug. 18, 2016. The Daqneesh family lived in the building on the left.
Abdalrhman Ismail—Reuters

Dr. Mohammad: I was in my hospital but we can hear on the walkie talkie about the observers to the sky telling us there was an airplane or helicopter, maybe Syrian or Russian, above Aleppo.

Rslan: I was waiting at home, conscious of an imminent airstrike. I was also hiding from the aircraft.

Abo Rajab: We heard the impact and 10 minutes afterwards, ambulances started to bring the victims.

Rslan: When I heard the loud sound of a bombing, like the sound of a rocket hitting, I took the car and drove really fast.

Sarout: I went to the scene dashing.

Rslan: When I arrived there, I heard the rescuers say on their handsets that they had many emergencies. There were people picking up bodies from under the rubble.

Sarout: I saw three bodies—two men and a woman—all dead. There were also eight people wounded. Those were separate from Omran’s family. Then I had been told that a family was stuck in a building. It was Omran’s family. There was risk to their lives to pass them through the windows. The first one to be removed from the rubble was Omran.

Rslan: We were looking into how to access the building that was half-collapsing. We then managed to get to the house of Omran through another adjacent building. We had to jump 1.5 meters [5 feet] to get to the house where Omran was. His mother was in her sleeping pajamas, covered with the rubble of a collapsed wall. Omran’s father was rescuing him. He removed him from under the rubble and handed Omran to me and other people from the balcony.

Rslan: His dad was bleeding from an injury in the head. I saw Omran. First, I filmed a video when Omran was removed from underneath the rubble and was taken to the ambulance. It was all dark and only the moonlight was there. I changed into photo mode when the child arrived [in the ambulance]. I had mixed feelings about the situation. While taking the photo and looking at the boy, I was crying, while pleased that I was doing my job and taking a powerful photo. I wanted the focus to be clear. When I really started to sob was when I saw the eight-year-old sister of Omran. His sister was as calm as him and she had a similar injury in the face and eye. She made me cry 10 times stronger. We are humans, we are people. I was crying for the children and fearing that my daughter may go through the same experience. The mother was rescued. She was also taken out from one balcony to another. The entrance of the building was blocked with iron and rubble. We had to take the children from over the door.

Sarout: When the rescuer placed him in the car, I felt that he was traumatized. He was just looking at us with a strange look, as if he was wondering what happened to his family.

Five-year-old wounded Syrian boy Omran Daqneesh sits alone in the back of the ambulance after he sustained injuries during an airstrike targeting the Qaterji neighborhood of Aleppo on Aug. 17, 2016.
Mahmoud Rslan—Anadolu Agency/Getty Images

Nott: It’s an underground hospital. The ambulances have to stop outside and the patients are then transported on a stretcher or wheeled trolley down the ramp to the emergency room. It’s about the size of five cars together—that’s the width of the room—and then about five cars long. It’s about 20 beds. It’s a gray tile floor, with white walls and a cream ceiling. It’s always kept really clean, it’s very well-run. Off that is the intensive care unit, which [can have up to] eight to 10 beds. If you come back out of there, if you go to the right, you go straight into the operating theaters. Two of them are functioning. If you go behind the emergency room, there’s another door straight ahead that is a place for sleeping and a place for resting. And the wards are also underground, and they are to the left of the emergency room. Basically when you get a mass casualty of 20 people to 30 people coming in, they’re just all over the floor so you have to make decisions on stanching the bleeding and seeing what space you have in the operating theater and which patients need to be operated on. And if you have too many patients that need surgery, you just have to do it on the floor. That’s a very regular occurrence.

Dr. Mohammad: We take about eight from the casualties and the others go to other hospitals. One of the eight was Omran. We received five kids and two young men and one woman. I saw him in the emergency room. Every casualty came to the emergency room so the surgeon on the shift can check on everyone and make an order. He was awake but he didn’t speak, maybe he was afraid or in shock or in pain from the wound. I only asked his name. He was in shock. His family did not go to M10, maybe his neighbors. We know that from our documentation—that only he had his last name in the hospital that night.

Abo Rajab: Omran entered with four more children. There were three girls and two boys. All the children were screaming and shouting, looking for their families. Omran wasn’t. He had blood dripping on his face and on his clothing. There was dust and dirt filling his hair and his face and his clothing. So we did the basic diagnostic examinations, including an X-ray and ultrasound of the abdomen. Then we cleaned the wound and dressed it.

Dr. Mohammad: He was discharged [after two hours] because we can only treat the medical conditions. We didn’t have any psychologists to treat the shock.

Omran Daqneesh with a bandaged head after he was treated at the M10 hospital following an airstrike in Aleppo on Aug. 17.
Courtesy of Dr. Mohammad

Sarout: I sat with the video, thinking and wondering what Omran was feeling. After I filmed this video, I gave it to the AMC. They edited it and posted it online. I was so exhausted following that night that I went to bed. When I woke up the next day, all the international agencies and journalists wanted to speak to me. I felt I did something to this revolution.

Rslan: I just want to continue standing against injustice. When we took to streets in peaceful protests, people who fled the country betrayed the civilians left behind. I want to continue to document the crimes. I want to stay with the poor civilians who can’t flee. I don’t want to leave and let my people down. This is my commitment and I feel at peace with it.

Nott: On Saturday, somebody called me—it’s about 3 o’clock my time—to say “Did you know his brother died?” And then I called Abu Waseem [a medical worker who Nott has trained] at M1 and I said to him “Is Ali, his brother, there?” And he said he was there, but he’d just died of liver and kidney injuries. So he then sent me a picture of Ali.

Abo Rajab: His family was in terrible conditions of course after the destruction of their house. They are now living in a small house that is very humble and tight. I brought several toys [during a recent visit]. A small pony that Omran rode on, a small doggy and also a train and a car, and several other small toys [to share with his brother and sister]. His smile was on his innocent face.

The interviews, several of which were conducted through translators, were edited for clarity and brevity. Translation contributed by Abdulhamid Qabbani, a Syrian researcher and journalist; Mohammad Almahmoud, a Syrian journalist; and Zaher Sahloul, a critical care specialist and volunteer with the Syrian American Medical Society. Some of the conversations occurred by phone and WhatsApp messages. Attempts to reach the family were unsuccessful. 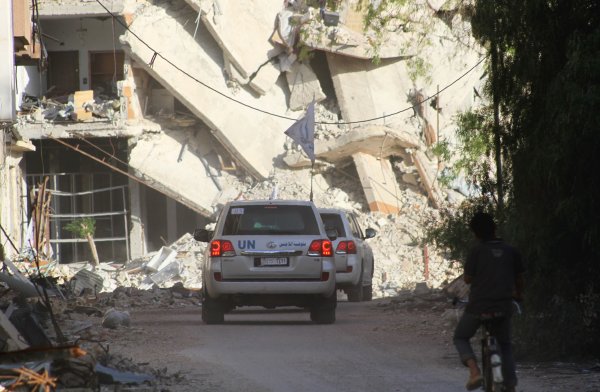 Boost for Assad as Syria Regime Clears Town of Daraya
Next Up: Editor's Pick