The death toll from Wednesday’s 6.2 earthquake in Italy’s central Appenine region rose to 247 Thursday morning, according to the country’s civil protection agency, as rescuers continued to dig through the debris for survivors.

A 10-year-old girl was recovered alive from underneath the rubble in the town of Pescara del Tronto on Wednesday evening, nearly 17 hours after the quake struck, the Associated Press reported. However, many were not so fortunate.

Read next: Everything We Know About the Earthquake in Central Italy

“Unfortunately, 90% we pull out are dead, but some make it, that’s why we are here,” a volunteer named Christian Bianchetti was quoted as saying. Officials expect the death toll to rise further in the coming days. More than 360 people were injured in the tremblor.

Two powerful aftershocks, at magnitudes 5.1 and 5.4, hampered rescue efforts. Meanwhile, the Guardian reports that Italians lined up to donate blood across the country following an appeal from the Italian Red Cross and health officials.

Prime Minister Matteo Renzi visited the devastated town of Amatrice midday Wednesday, vowing that “no family, no city, no hamlet will be left behind” as the region recovers and rebuilds after the disaster.

“Today is a day for tears, tomorrow we can talk of reconstruction,” he added. 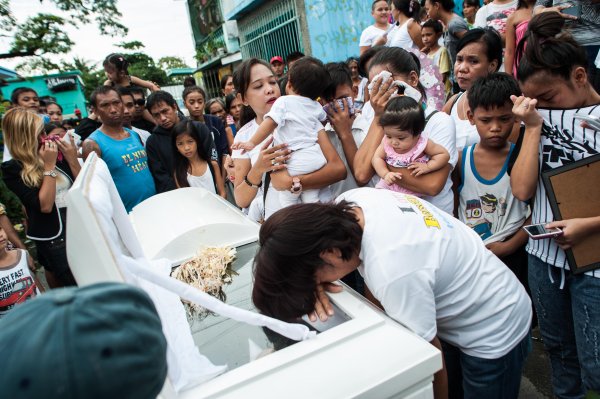 Inside Philippine President Rodrigo Duterte's War on Drugs
Next Up: Editor's Pick