The British royal family has been fodder for all manner of entertainment on both sides of the pond, but Netflix’s ambitious new show The Crown, premiering Nov. 4, aims to be the first to dramatize Queen Elizabeth II’s life in full. The series was budgeted an estimated $100 million and will span five seasons, one for each decade of the queen’s reign.

The series was created by Frost/Nixon scribe Peter Morgan, who at this point is an expert on Queen Elizabeth II. He has written about her twice before, in the 2007 film The Queen and the 2013 play The Audience. Both starred Helen Mirren, and the actress won an Oscar and Tony, respectively, for her work. This time, Claire Foy will play a much younger Elizabeth: the series begins on the eve of her marriage to Philip.

The new trailer shows fissures between Queen Elizabeth and her husband as she struggles with her unexpected ascendency to the thrown at such a young age. Morgan spoke to TIME about how much of the show will be fact and fiction, how the queen’s coronation hurt her marriage and the royal family’s response to the series.

What is your research methodology?

Other showrunners have writers’ rooms. I have a researcher’s room. I have about six or seven people working full-time. The research team I have now is bigger than anything I’ve ever worked with before. I’m bombarded by possibilities and opportunities.

And then you begin to understand what the show’s about, and then you can steer the researchers and sort of say find the incidents in which this sort of predicament might be available.

What is the first season of the show about thematically?

What effect does it have on a woman to suddenly be two people, to be both Elizabeth Windsor and Elizabeth Regina? With the crown come a series of rules and expectations that might be quite out of step with the person who has the crown on their head. There is a constant duality between who you are as an individual and what the crown makes you become.

So I would say season one is about Elizabeth Windsor struggling with what Elizabeth Regina actually means and suddenly realizing you can’t just be yourself with a crown on. The crown itself is so powerful—it becomes its own personality.

I feel like I’ve begun to see the effects of the crown especially on her relationship with Philip and this building resentment he has toward her power. It’s particularly interesting watching as an American imagining Bill Clinton becoming First Gentleman.

For the first 10 or 11 years of her life, she was absolutely expecting to live this sort of normal life as an aristocratic, yes as a princess, but absolutely out of the public eye. And then her uncle did this unimaginable thing: he gave up the throne. And her father became king.

Now Philip, I think, had made the mental calculation that he would enjoy 20 years of married life before this dreadful crown business would happen. As an ambitious, energetic, very much an alpha personality type, I think he was quite reasonably expecting to have a long, successful career and reach the upper echelon of the Royal Navy. But then King George became sick and died at age 56. This thing happens, bang, sooner than anyone would have expected.

And that was very difficult for Philip to cope with. He was forced to give up his career and become, as it were, her consort. And that led to all sorts of tensions, both within himself and within the marriage.

Have you gotten any sort of response from inside the palace about this project?

They’re very aware of the project. But the palace and I exist in a state of respectful distance from one another. There’s no collusion. Of course, people who used to work at the palace have talked to us and people who know them. But I don’t speak to any member of the royal family about this.

You’ve returned to the same subject, Queen Elizabeth, again and again. Why?

It’s an accidental thing. If you’d have said this to me 10 years ago, I would have laughed. I would have said I can’t think of anything I want to write about less. I’m not a royalist. I don’t read newspaper articles about these people. I’m not particularly interested.

But I am interested in the way in which the country is made up, and I’m interested in who our leaders are. And she’s a fantastic prism through which to look at the second half of the twentieth century. She spans four generations in public life, and that’s a remarkable thing.

As an individual, she’s not a gift to a dramatist because she’s quite a private woman. You want someone like Tony Soprano, really. Someone who settles his arguments with a gun or is explosive. If she wasn’t in conjunction with the prime ministers, I wouldn’t be interested in doing it. It’s when she as head of state, and they as head of an elected government come together, there’s something very interesting happening there. 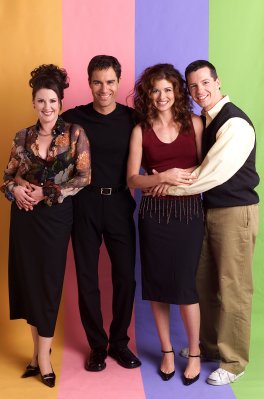 Will & Grace's Strange Reunion Shows Why the Show Faded Away
Next Up: Editor's Pick