It’s no secret. The director of the world’s largest photojournalism festival, which will open its 28th edition this weekend, has the reputation of being an opinionated old-timer. Jean-François Leroy has been referred to, affectionately – and not so affectionately – as a ‘dinosaur’ for his stance on new technologies and alternative approaches to photojournalism. He’s actually come to claim the label as his own, especially if it means sticking by the time-honored codes and ethics of journalism. Still, it’d be a mistake to cast him off as stuck in the past, longing for the good old days and averse to any novelty.

“I’m all for sharing on every type of platform, whether it be Instagram, Snapchat, Facebook and the likes, but not if it’s done haphazardly, which unfortunately is too often the case,” he explains. To avoid at all cost: sharing pictures of your daily life, after posting images from, say, the migrant crisis off the Greek coast, which would be both in bad taste and insipid. For those who might be doing it as a way to connect with followers, to seem more approachable or congenial, he has these words: “A photographer’s humanity shows in how they cover any given situation. I don’t need to know about John Stanmeyer’s family life to know that he cares about others. His work speaks for itself. I have yet to meet Andrew Quilty, whose photos from Afghanistan are exhibited this year, but I can tell, from them, that he’s a great human being.”

Speaking of the Australian photojournalist, Leroy found out about his work through Instagram, when a common friend shared the haunting image of a young boy, Gul Ahmad, suffering from malnutrition resting underneath his mother’s orange scarf. “When I saw that picture, I was compelled to go see what else Quilty had produced. His work was so consistently strong, that I felt it deserved a retrospective,” he recounts.

That said, he also believes that photographers should be careful with sharing too much of their content on social networks. It dilutes it, makes it no longer exclusive, and might not even be seen. “28 years ago, we needed three different computers: one to access the Agence France-Presse feed, one for Sygma and one for Associated Press. Now, with one, I can log in to 357 image banks across the world. It’s wonderful, by all means, but who has the time to go through all of it. And then, add social networks…” he says. That, according to him, is the heart of the matter: he doesn’t go to Instagram to find work about the Zika virus, he turns to trusted sources. Quilty’s case is an exception, a stroke of luck. “The main problem remains that there’s no economic model for photographers using Instagram. In the end, what photographers need the most are the means to do their job,” he adds.

Still, a few photographers have managed to turn their Instagram presence into popular, and mildly lucrative practices, chief of which is David Guttenfelder whose posts from North Korea garnered interest from the public and photo editors alike. “What’s interesting about David is that he has a double approach: he’ll cover the story using ‘traditional’ cameras for publications, while also shooting asides with his iPhone, which he shares on his feed. The two provide a different, complimentary report,” says Leroy. This is why, he was the first, several years ago, to have his iPhone images screened during the festival and why, he’s again the first, – albeit with a few years delay; he was named TIME’s Instagram photographer of the year in 2013 – to have an exhibition curated entirely from his Instagram account at this year’s festival. [Both Guttenfelder’s and Quilty’s exhibitions were curated by TIME LightBox’s Editor, Olivier Laurent]

So, no, Leroy is not against new technologies, per se. He’s just not an early and indiscriminate adopter because he firmly believes they need to be employed deliberately, which comes with understanding their affordances. For instance, he praises Stanmeyer for his uses of Snapchat: “The people who follow him can, within a few seconds, get useful insights on the issues he’s covering. I’m not sure that the tidbits he shares on there would make it in print,” he says. “[But] he demonstrates how it can be a new way to relay information, where everyone can be their own broadcast channel, which is great, granted that you have something meaningful to say.”

Yet, there is one new technology he cares little for: virtual reality. “The role of a photojournalist is to choose an angle and a frame, to give his vision of what’s happening on the ground. With 360-degrees footage that goes out the window; there’s no more deliberateness, no more subjective objectivity,” he declares, hinting, yet again, that too much coverage can be just as bad as none at all. 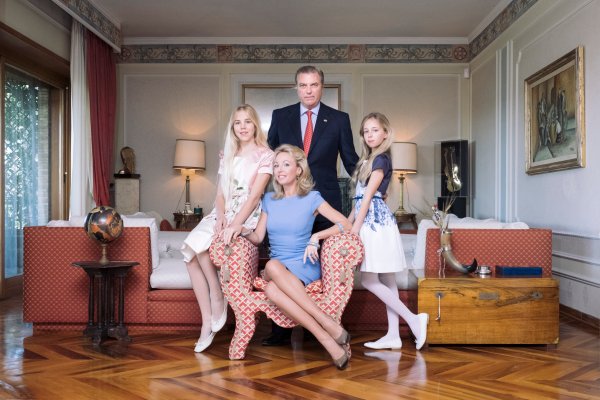 Re-Discovering the Italian Kingdom of Two Sicilies
Next Up: Editor's Pick