U.S. Marine Gunnery Sgt. Christopher Willingham is photographed with Lucca on Dec. 27, 2012. Lucca was awarded for completing 400 missions even after losing one of her legs while searching for homemade bombs in Afghanistan.  Gary Friedman—LA Times via Getty Images
animals

Here Are 10 Hero Dogs to Celebrate on National Dog Day

There are endless reasons why dogs are considered man’s best friend. The tail-wagging, four-legged friends fetch the mail, keep the bed warm, greet you at the door and provide unconditional love and loyalty. And they’re living proof that not all heroes are human. In honor of National Dog Day—celebrated every year on Aug. 26–here are 10 canines to celebrate for their bravery, dedication and devotion.

The Dog Who Died Leading a Counter-Terror Raid in Paris

A French police dog named Diesel was killed as he led a counter-terror operation in Paris shortly after a series of coordinated terrorist attacks in the city left at least 130 people dead.

The 7-year-old Belgian Shepherd was shot several times during an apartment raid targeting the alleged mastermind of the attacks in November.

People’s Dispensary for Sick Animals, the U.K.’s leading veterinary charity, posthumously awarded Diesel with the highest animal honor in the world for his “gallant actions.”

The Dog With a Short Spine

Quasimodo, a rescue dog in Minnesota who suffers from short spine syndrome, showed the world it’s OK to look different after his inspirational story went viral in February.

The 4-year-old German shepherd’s body is compressed because of his rare medical condition, which affects only 14 known dogs in the world. He was hailed a hero “because he is the definition of the qualities we all admire in our dogs,” his foster parent said.

The Dog Who Died Saving His Family From Cobras

A dog in India sacrificed his life in July to save his eight-member family from four deadly cobras that were attempting to slither into their home. The Doberman mercilessly fought off the four venomous snakes in a bloody battle that lasted hours, the Deccan Chronicle reported.

He died minutes after killing all four snakes after having been bitten repeatedly. “He has made the supreme sacrifice for me and my family. I will remember him till our death,” the dog’s owner, Dibakar Raita, told the newspaper.

A Boxer in England named Paris picks up plastic bottles and aluminum cans and deposits them in the nearest recycling bin whenever she goes on walks.

The 9-year-old pup has never been trained to clean up after litterbugs. Her owner says Paris has always been inclined to recycle since she was a puppy.

The Dog Who Died Helping Police Find a Violent Felon

Sultan, a California police dog, was shot in the neck and died in February when he was sent into a house to look for a violent felon. The Belgian Malinois-German shepherd mix was given a hero’s farewell, with a memorial that drew hundreds of mourners.

“When I heard this, it felt like I’d lost a peer,” Riverside County Chief Deputy Geoff Raya said at a news conference. “There is very little differentiation between four legs and two legs.”

Hundreds attend a memorial for a California police dog gunned down in the line of duty http://t.co/FMhH67E349 pic.twitter.com/FfdlhONlre

Sissy showed us the meaning of devotion when the female miniature Schnauzer was caught on surveillance cameras last February in a hospital lobby, trying to find her cancer-stricken owner.

The pup walked 20 blocks to the hospital, which she had never visited, in search of her owner who had been at the hospital for two weeks, according to ABC News.

Sweet dog! Sissy walked 15 blocks to nearby hospital to track down her sick owner. http://t.co/by9uKJo03Q pic.twitter.com/8GDEaveqYt via @HLNTV

The Dog Who Completed 400 Military Missions With 3 Legs

Lucca, a retired U.S. Marine Corps dog, was given a top military medal for completing 400 missions even after losing one of her legs while searching for homemade bombs in Afghanistan.

Lucca carried out the operations in Iraq and Afghanistan, sniffing out explosives and protecting "the lives of thousands of allied troops," NBC News reported. 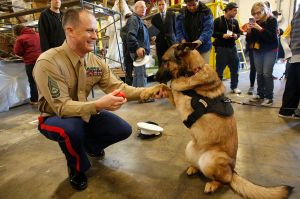 The heroism of Max, a Manhattan police dog, dates back to 1928, when he dragged his unconscious owner away from a house fire and barked until a police officer came to revive him. Max’s owner fell asleep with a cigarette in his mouth and accidentally started a blaze when the cigarette dropped onto a pile of clothes, TIME previously reported.

The quick-thinking canine first dragged the burning clothes away with his teeth and then moved his owner to a safe place before alerting a police officer.

The Dog Who Chased Away Two Large Bears

A French bulldog named Jules may have protected her family from two large bears when she scared off the 100-pound animals coming near her family’s home in California. But the tiny dog also provided much entertainment as video of the encounter went viral and delighted viewers across the globe.

The Dog Who Is the Perfect Example of Democracy

Duke, a Great Pyrenees, was recently re-elected to serve a mayor of Cormorant, a small town in Minnesota, after winning the vote of nearly all of the roughly 1,000 residents, USA Today reported. The powerful pooch has held the position since 2014, according to the newspaper. This is his third consecutive term.