Louisiana Governor: The State's 'Historic' Flooding is Being Ignored

The devastating flooding in Louisiana is the worst natural disaster to hit the U.S. since Superstorm Sandy four years ago. Yet extensive floods in the southeastern part of the state have received a fraction of the attention of Sandy despite the fact that tens of thousands of residents have been left homeless and 13 were killed after an estimated 6.9 trillion gallons of water fell across Louisiana between Aug. 8 and 14. Twenty parishes have been declared federal disaster areas, prompting visits from both Republican presidential nominee Donald Trump and President Obama, who was criticized by some in the state for not cutting his summer vacation short to visit sooner.

One person who defended the president’s decision was John Bel Edwards, the state’s democratic governor. Edwards spoke with TIME on Tuesday about the president’s visit, the long recovery ahead, and how he believes the disaster is actually helping Louisiana heal following the death of Alton Sterling, who was killed by police earlier this summer.

President Obama visited Louisiana flood victims on Aug. 23, but he was criticized for not coming down sooner. Was this the right time for him to visit?

There was a discussion about the most appropriate time. And I told [the White House], I would rather get out of the response phase and into the recovery phase because I didn’t want to have to take first responders who were engaged in urban search and rescue and go close down the Interstate and block off every intersection and provide the security. From my perspective his visit was timely. There is no doubt in my mind that he’s going back to Washington, D.C., with a proper appreciation for just how immense this flood disaster was.

Everyone remembers the images of Hurricane Katrina and the thousands left homeless. How does this compare?

In terms of the disaster itself, there are similarities. We literally had nine weather stations that reported more than 21 inches of rain in a 48-hour period. The climatologists for the state of Louisiana say that the probability of that type of rainfall happening in any given year is 1 in 1,000. So this is literally a thousand-year rain event and flood event where we had rivers and creeks, canals and bayous, at record levels.

You said you thought there would be a lot more Red Cross donations for victims. Why do you think there hasn’t been interest in what’s happened there?

The national media really has not given this story the focus that it needed to. This is historic, unprecedented, record-level flooding, with well over 100,000 homes damaged and tens of thousands of people that are not in their homes right now. But because of the Olympics, because of the presidential election, and I think because it was not a named storm, this wasn’t a hurricane that the nation was looking at. As a result, the attention of the American people has not been on this story. And they haven’t been as engaged and contributing to Red Cross as they normally would be. So we’re trying to make up for that.

Do you believe the flooding is due to climate change?

We all have our own sneaking suspicions. I will tell you that if these types of extreme weather events continue to happen with the frequency that we’ve seen recently over the next few years, I think that’s about the only thing that explains it.

When people talk about Katrina, they remember the slow response and lack of coordination from the Federal Emergency Management Agency. How would you rate FEMA’s response this time?

It’s still a bureaucracy. Things still move slower. They still tell you no quite often when you ask for assistance because they can’t do things that their lawyers tell them are outside of their authority. But the coordination has been much, much better. There are a lot of good employees at FEMA, and I believe since Katrina, the laws have changed to give them a little more flexibility so they can be more responsive.

When events like this happen, people often say it’s almost foolhardy to live in a place like Louisiana that’s prone to so much flooding. How do you make the case that this is a place where hundreds of thousands of people should be living?

It’s hard for me to take seriously comments and questions that people raise from time to time. We’re going to rebuild. We are way more resilient than perhaps some people believe. We have a lot of wonderful people, hard-working, industrious people who are resilient and who are going to certainly recover from this and go forward.

What is the state doing to prevent flooding in the future?

We are asking for hazard mitigation funding as a result of this so that we can channel floodwaters and keep them out of communities, put them into the Mississippi River and put them other places where they don’t cause the damage that we’ve seen. In some of those projects, even in record flooding like we’ve just seen, it will lessen the severity of the flood damage.

How long will it take for these areas to recover?

This is a process that’s going to go on for many months. I don’t want to say years. It’s not going to be like Katrina. We actually still have projects that are being done to recover from Katrina. We’re going to set up a structure that’s going to be much more responsive than that. It won’t be as bureaucratic. It won’t be as clunky and burdensome. We have the experience from Katrina, but we also have experience from places like New Jersey and New York after Sandy.

President Obama also met with the family of Alton Sterling, who was killed by police earlier this summer. What is the relationship like now between police and black communities?

Do you believe trust is broken between police and communities of color?

I really don’t. The storm here has shown that our community works very well together. I wish the nation could see what I’ve seen. And that is people being neighbor to one another, irrespective of black or white or political party or rich or poor. I have seen our community more united than ever. 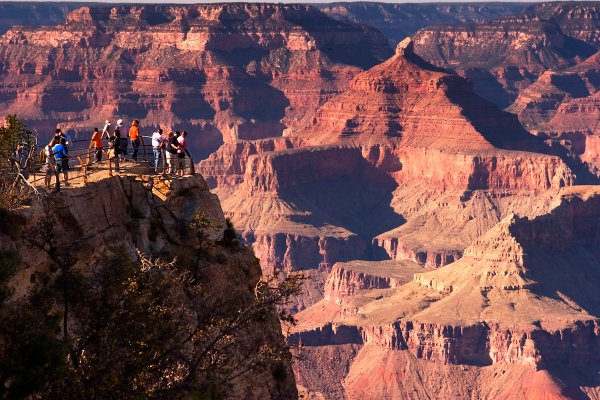 See the Massive Growth in Visitors to America’s National Parks
Next Up: Editor's Pick