A deaf man who was fatally shot by a North Carolina state trooper last week was mourned at a memorial service Tuesday as authorities urged people not to jump to conclusions while the incident is being investigated.

Daniel Harris, 29, died last Thursday after he failed to move to the side of a highway when Trooper Jermaine Saunders was trying to pull him over for speeding, the Associated Press reported. It’s unclear what led the officer to fire off one fatal shot after the police chase ended near Harris’ home, but the deaf man’s family said he likely didn’t understand what the officer was saying.

“Daniel’s death is just a shock — what is it for? It’s definitely worthy, it has value, and I’m angry about it,” Sam Harris said Tuesday at his brother’s memorial service, according to NBC News. Sam Harris is also deaf — as are his parents — and communicated his thoughts to mourners using sign language.

“You know that night, he was driving home, he was excited, he had a new job … and he died just a few yards from home,” Sam Harris added.

Harris’ family said Harris was unarmed at the time of the fatal police shooting. They are working to set up a foundation to honor Harris and help law enforcement agencies train on how to confront deaf people, according to an online fundraising page the family set up.

The family also wants states to set up a system that alerts law enforcement officers to deaf drivers. “With this change, Daniel will be a hero in our deaf community,” the YouCaring page says.

More than 650 people had donated more than $28,000 to the Harris family as of Wednesday.

“You don’t see deafness the way that you see the difference in race. We need to change the system,” Sam Harris said Monday after a community vigil, according to the AP.

Harris, a Massachusetts native, was a computer and gaming whiz who loved played Yu-Gi-Oh! and often competed in tournaments, according to his obituary, which was published in the Charlotte Observer. He was also a champion soccer star and played basketball and ran track when he attended the American School for the Deaf in Connecticut, the obituary said.

The police shooting sparked a fresh wave of outrage in a nation where tensions and concerns have risen over use of excessive force by police officers.

A top public safety official in North Carolina asked everyone to “refrain from making assumptions or drawing conclusions” before internal and independent reviews are conducted by the North Carolina Highway Patrol, the state Bureau of Investigation and the district attorney’s office.

“Any loss of life regardless of the circumstances is truly a tragic and sad event for all involved,” Secretary Frank Perry of the North Carolina Department of Public Safety said in a statement. “We are keeping all those affected by this tragedy in our thoughts and prayers.”

'Police Do Not Belong in Our Schools.' Students Are Demanding an End to Campus Cops After the Death of George Floyd

Saunders is on administrative leave, according to the AP.

The National Association of the Deaf (NAD) also called for systematic change in how officers interact with deaf people, saying Harris’ death was an “unfortunate tragedy.”

“We express our heartfelt apologies to Daniel’s family and the deaf and hard of hearing community,” NAD Vice President Melissa Draganac-Hawk said statement. “Daniel isn’t the first deaf person who was wrongfully shot by the police. The shooting that took place was wrong. All police departments in every state should undergo appropriate training to learn best practices when faced with a deaf person.”

“If a person does not respond to verbal commands, the police needs to be aware of the possibility that the person may be deaf and not react by shooting,” she added. “All police departments must work with us to improve and avoid this from happening again.”

Most Popular on TIME
1
I'm a Minneapolis City Council Member. We Must Disband the Police—Here's What Could Come Next
2
Trump Invokes Floyd in Praise of Jobs Report
3
“I Cannot Sell You This Painting.” Artist Titus Kaphar on his George Floyd TIME Cover 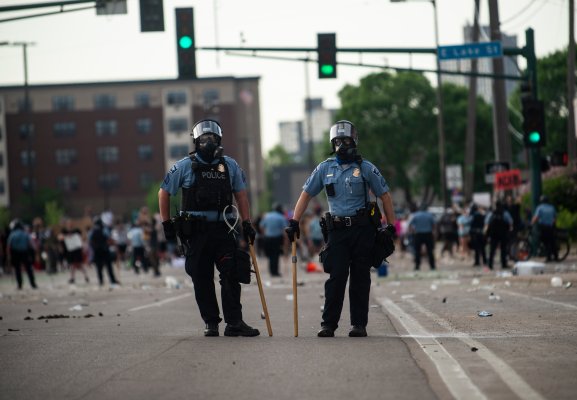