Why Italy Is So Prone to Earthquakes

At least 247 people have been confirmed dead and many are missing following a 6.2 magnitude earthquake which struck central Italy in the early hours of Wednesday morning.

But although the heartbreaking photos of homeless families and individuals searching for lost loved ones may suggest otherwise, Italy suffers frequent lethal earthquakes.

“It’s roughly of the same magnitude as previous earthquakes in the same regions,” leading U.K. seismologist Dr Silvio De Angelis tells TIME. “It is expected for earthquakes of that size to occur there. Not every decade nor every year, but there is definitely a potential.”

But why is Italy so prone to earthquakes?

The Earth’s shell is divided into several major tectonic plates. Southern Italy is very close to the line where the Eurasian and African plates meet and constantly grate against each other creating seismic and volcanic tension. Italy’s major volcanoes such as Etna, Stromboli and Vesuvius lie close to this fault.

In addition, Italy has a series of smaller fault lines, particularly along the Appenine Mountains.

The Apennine range, or Apennines Mountains, is a mountain range that runs from north to south along the country, “essentially like a geological spine of Italy,” says De Angelis. Relatively shallow earthquakes are fairly common along the entire length of these mountains due to the number of faults which run along the range, which can rupture and cause earthquakes.

“So different movement goes on around Italy and there are many faults and areas of weakness in the crust,” says De Angelis. “This results in complex tectonic movement in that region.”

Have there been many large earthquakes in the past?

Over the last 2,000 years, more than 400 destructive earthquakes have been documented in Italy. There have been 15 major earthquakes in the country since 1905, the worst being the 1908 Messina earthquake in southern Italy which had a magnitude of 7.1 and claimed 70,000 lives.

In more recent history, the L’Aquila quake of 2009 killed more than 300 people and damaged some 10,000 buildings in L’Aquila and the Abruzzo region. Civil protection authorities have that it is “comparable in intensity” to today’s earthquake.

How well-protected is Italy against earthquakes?

Italy has some construction dating back two or three thousand years. Small towns such as Accumoli, the one that was almost destroyed today, have buildings that are hundreds of years old, which are extremely difficult to retrofit so that they can withstand earthquakes.

“Modern construction will take seismic hazard assessment into account and I expect new buildings will be built according to modern standards,” says De Angelis. “But you have to consider that you have towns and villages in Italy with a long history and some of those buildings can not be protected, or at least it is very difficult and enormous undertaking.”

Dr Carmine Galasso, a lecturer in Earthquake Engineering at University College London, agrees with De Angelis. “Italy has a medium-high seismic hazard, very high vulnerability and an extremely high exposure, due to population density and its heritage, which is almost unique in the world,” he says.

“On the other side,” he adds, “Italy has one of the most advanced building codes for new constructions, state-of-the-art in the field. The challenge is really to assess the seismic safety of existing, old buildings and prioritize interventions for retrofitting and strengthening.”

Is it safe to go to Italy?

Seismologists cannot accurately predict whether or when another earthquake can occur, but “you can confidently say that there will be another one of a similar size at some point in the future,” says De Angelis. However, whether that is in the near future or not is impossible to say.

Aftershocks following today’s quake can be expected, something which De Angelis said is “often forgotten after a major earthquake”. They could last for three, four or five years but seismologists are not able to say when the largest aftershock will occur within that time window.

“We know that usually the largest aftershock is about one unit of magnitude lower than the main shock, so you can reasonably expect that the aftershock will be of around 5 magnitude, but we can not tell when it will occur,” he added.

The U.S. Department of State’s international travel to Italy section warns that “several major earthquake fault lines” cross the country, but does not suggest that people should be deterred from going. Additionally, flights to and from Italy appear to be unaffected following the disaster, with departures this morning to Perugia, the airport nearest to the epicentre, operating normally. Flights to Rome, too, have been unaffected. 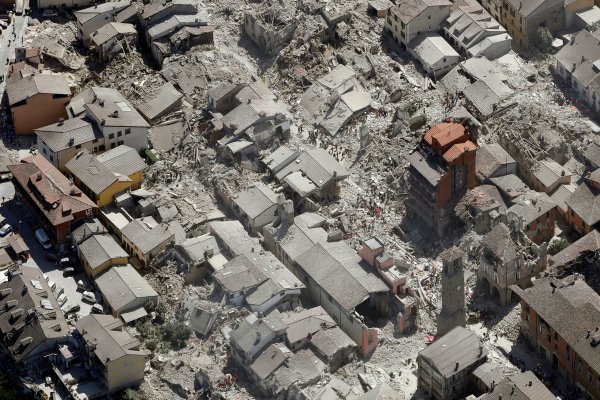