Everything We Know About the Earthquake in Central Italy

A 6.2-magnitude earthquake struck the Apennine regions of central Italy on Wednesday, killing an estimated 247 people and causing “apocalyptic scenes” near the epicenter.

Amatrice, a small town of about 2,600, was worst hit by the quake. Early Wednesday residents gathered in the town center to await word of survivors, while others stood among the rubble of their former homes, looking out for aid workers coming to bring them food and basic supplies.

Although earthquakes aren’t uncommon in this region, the latest quake to hit the country was a particularly bad one. Here’s what we know about it:

The Lazio village Accumoli and the town of Amatrice, as well as Pescara del Tronto, in the Marches region bordering Umbria, were particularly affected due to their close proximity to the epicenter.

The worst-hit towns are believed to be Accumoli, Amatrice, Posta and Arquata del Tronto, but even residents in Rome, some 170 km (105 miles) from the registered epicenter, were woken by the quake, which rattled furniture and swayed lights in most of central Italy, Reuters reports.

How big is 6.2 magnitude?
To contextualize the size of Wednesday’s larger quake, civil-protection authorities have said it is “comparable in intensity” to the 2009 L’Aquila earthquake, in which over 300 people died. Italy’s civil-protection agency has described the earthquake as “severe.”

Lina Mercantini of Ceselli, Umbria, told Reuters that the earthquake “was so strong” that it “seemed the bed was walking across the room by itself with us on it.” Olga Urbani, in the nearby town of Scheggino, said her “walls creaked and all the books fell off the shelves.”

What is the death toll?

Italy’s civil-protection agency said Wednesday that the death toll had risen to 247, according to the AP.

Stefano Petrucci, the mayor of Accumoli, has said that an “unquantifiable” number of people are “certainly” buried under rubble, including a family of four with two young children in the town.

In Amatrice, at least five people have died, while 10 people, including an elderly married couple, died in Pescara del Tronto. “There are tens of victims, so many under the rubble. We’re preparing a place for the bodies,” Sergio Pirozzi, the mayor of Amatrice — a beauty spot and popular holiday destination — told reporters. The Rieti provincial chapter of Italian blood-donation charity AVIS has put out a call for people to donate blood for the injured. ANSA’s estimate includes 11 people confirmed to be killed in Accumoli.

Around 150 people are feared missing, including two Afghani refugees called Sultana and Hahmed, aged 26 and 27, and three nuns and four elderly guests at a local boarding house, all from Amatrice.

How did the buildings hold up?

Not well. “Half the town is gone,” Mayor Pirozzi told reporters. “There are people under the rubble. There’s been a landslide and a bridge might collapse,” he added. Rescuers have had difficulty accessing areas due to landslides and damaged infrastructure. The main street through Amatrice has been devastated and emergency workers are trying to reach six people in a collapsed building.

The hospital in the mountain town also had to be evacuated because of structural damage and was declared non-operational, but none of the patients were reported injured.

A refuge on the Gran Sasso mountain, a popular area for hikers and climbers, said on its Facebook page that a large piece of rock had collapsed in Wednesday’s quake, Reuters said.

Are earthquakes common in Italy?
Yes. According to the BBC, seismic activity in the region is frequent owing to “the great collision between the African and Eurasian tectonic plates” nearby. In May 2012, a 5.5-magnitude quake hit the northern Emilia Romagna region, when two violent shocks 10 days apart left 23 people dead and 14,000 others homeless, the Guardian reports.

The last major earthquake to hit Italy struck the central city of L’Aquila in 2009, killing more than 300 people. This temblor was of a similar magnitude.

What next?
Seismologist Andrea Tertulliani told the BBC that there are “sure to be further, numerous shocks that would probably diminish in intensity.” But he added that “another shock on the same scale as the main one” couldn’t be ruled out.

In the meantime, L’Aquila Mayor Massimo Cialente has made 250 temporary homes built after the 2009 earthquake available for the newly displaced. 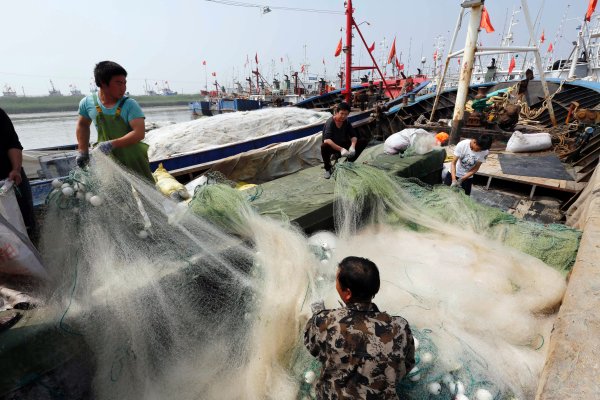 The Fight to Save Seas From China's Fishing Industry
Next Up: Editor's Pick